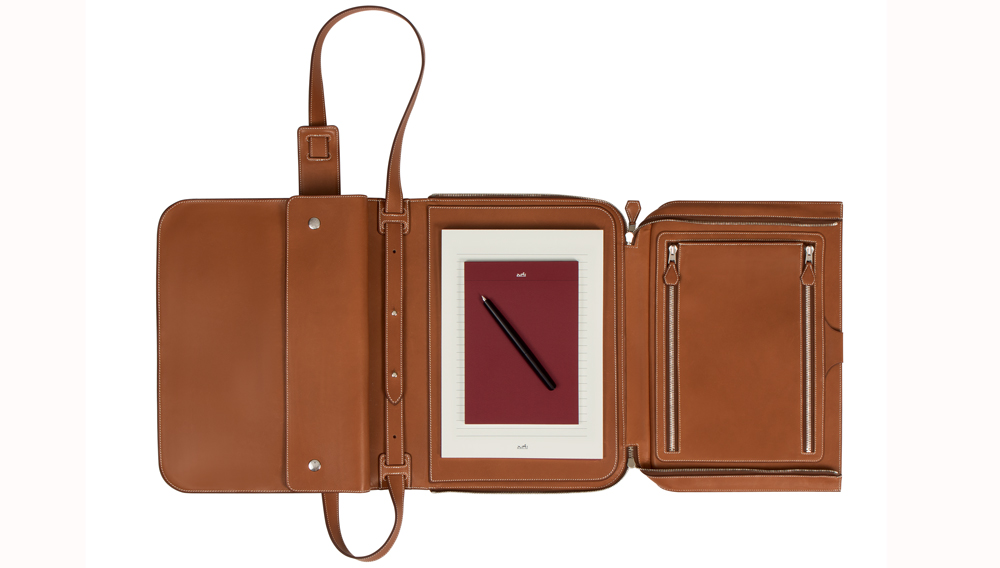 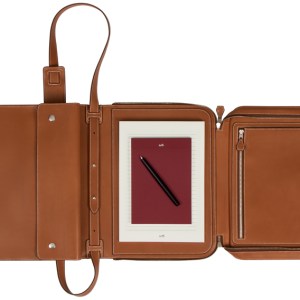 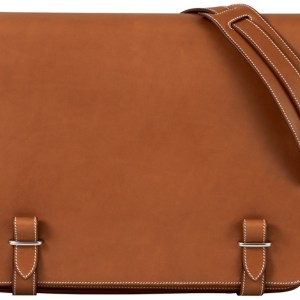 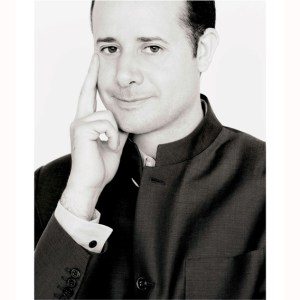 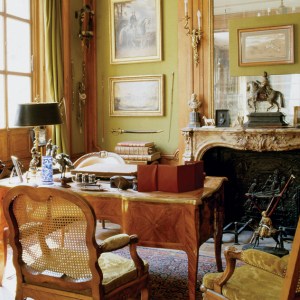 The Hermès family upholds its tradition of producing practical products and elegant curiosities that, in turn, create meaning and memories for generations of owners.

In defiance of our digitally accelerated, smartphone-obsessed culture, which emphasizes an immediate gratification that seldom gratifies, Pierre-Alexis Dumas dedicates himself to dreaming up concepts intended to inspire society to slow down and savor the moment. The latest such whimsy from the artistic director of Hermès is an attaché case that unfolds to form a small writing tablet—a practical yet capricious device that gives the imagination a place to play, no matter where the owner happens to be. “I designed the Sac Écritoire for myself,” he says. “When I’m stuck at the airport or in transit, I can open my little desk and sketch wherever I am.”

More than just an adaptable tool for daydreamers, the portable escritoire represents a continuation of one of the company’s most novel traditions: Each year, the 178-year-old luxury-goods producer adopts a theme that speaks to some particular aspect of its heritage, and its design team then devises a series of limited-edition items that reflect the chosen subject. Dumas, a member of the sixth generation of his family to steward the brand, inherited the task of selecting this annual leitmotif from his father, the longtime chairman Jean-Louis Dumas, who initiated the practice of thematic presentations in 1987. The practice encourages the company’s custodians to connect to the past while keeping in mind the weighty responsibility of carrying forward the legacy of Hermès—one of the few large fashion houses to remain in the hands of family members. This year, Dumas organized the design team’s efforts around the idea of flânerie, a French term often used in the 19th century to describe the favorite pastime of the leisurely urban explorer, who strolls the streets, meditating on the energy and beauty of the city.

“Flânerie is a celebration of life,” says Dumas, who in the spirit of this diversion invited a group of international journalists to spend a day with him in London as flaneurs, meandering through different neighborhoods, antique markets, and shops. “In a digital age, it is a reminder that we have two legs, and our body needs to experience the real world. Flânerie is a mind-set that allows our minds to wander and discover beautiful objects.”

Dumas’s discoveries as a flaneur inspire him to produce such beautifully handcrafted pieces as his Sac Écritoire, an appurtenance that likely would have appealed to his great-great-grandfather, Émile Hermès, who established and cultivated the company’s twin commitments to craft and enduring style. From 1910 to 1950, this patriarch greatly expanded the scope of his father’s saddlery workshop, providing wealthy Europeans and a cadre of royals with impeccably crafted leather saddles and luxuriously appointed carriage interiors. Enamored of striking design and skillfully executed work, Émile assembled a collection of thousands of superbly rendered, centuries-old items from around the world relating to horses and travel, and this collection—along with his original, almost perfectly preserved office—constitutes the private Hermès museum, which occupies a floor above the Parisian flagship store on the rue du Faubourg Saint-Honoré. “He was a true collector and was sensitive to any object that seemed to be animated from inside or had a spirit,” says Dumas, who adds that Émile spent much of his time in pursuit of finds to join the rest of his burgeoning private collection. Among the treasures on display in his menagerie are a mechanical horse made for Napoléon III’s son, the Prince Imperial; an elaborate leather travel case made for a British officer stationed in India; and a vibrant assortment of intricate jeweled and embroidered saddles fashioned for Asian warriors, African potentates, and Indian maharajahs.

This fascination with finely crafted and timeless objects remains a defining element of the Hermès culture. “Objects are signs that what we do is full of life and carries the spirit of whoever made it,” says Dumas, who knows personally many of the artisans who produce items in his workshops. A single artisan in one of the Hermès ateliers outside Paris, for instance, sews the Sac Écritoire by hand, employing many of the same precise stitching methods used to fashion the company’s original saddlery. In France, Hermès employs about 2,500 skilled artists, whose deliberate, unhurried methods oblige anxious clients to wait months for a coveted Birkin or Kelly bag.

Yet classic, understated style that eschews fashion trends is as much a hallmark of Hermès as quality work. The best-selling Kelly and Birkin models—named, respectively, for Grace Kelly in 1956 and the actor and singer Jane Birkin in 1984—exemplify the subtle, unembellished aesthetic that carries through all the brand’s products. This note of elegant simplicity most recently informed the expanded menswear collection designed by Véronique Nichanian, as well as other merchandise, including new lines of innovative travel pieces, home furnishings, and leather-and-fabric clothing.

Nevertheless, despite the popularity of Hermès bags, silk prints, and accessories, the house’s special orders and masterfully executed statement pieces—such as the Sac Écritoire—remain important building blocks of a legacy that, under the current generation of management, continues to flourish. “Objects in a way are sacred,” says Dumas. “They carry the ideas and emotions of the people who made them.” To those fortunate enough to visit the company’s ateliers—where artisans deftly run their threads through wax before sewing perfectly aligned stitches into leather—the enduring value of these objects is evident. Even the humblest pieces continue to resonate with their owners and their heirs. Dumas recalls the time when Jane Birkin came to the store with the leather diary that belonged to her late partner, the musician Serge Gainsbourg. Her dog had chewed the book, and she desperately wanted the keepsake repaired. Dumas understood her attachment to this memento; his most beloved possessions were handed down to him as well. These treasures include his father’s Hermès Cape Cod watch and well-worn suitcase, the latter of which resides in Dumas’s office. “When I see the suitcase,” he says, “it reminds me of my father and makes me happy.”

Another precious article tucked away in his office is a box containing the tools he used as a child to craft his first leather product—an embroidered, monogrammed patch he made for his father one Christmas. This token in particular reminds Dumas of his personal goal at Hermès: to continue to uphold the tradition of crafting exquisite and durable objects that create memories for their owners. “People come and go,” he says, “but precious objects remain after we are gone.”