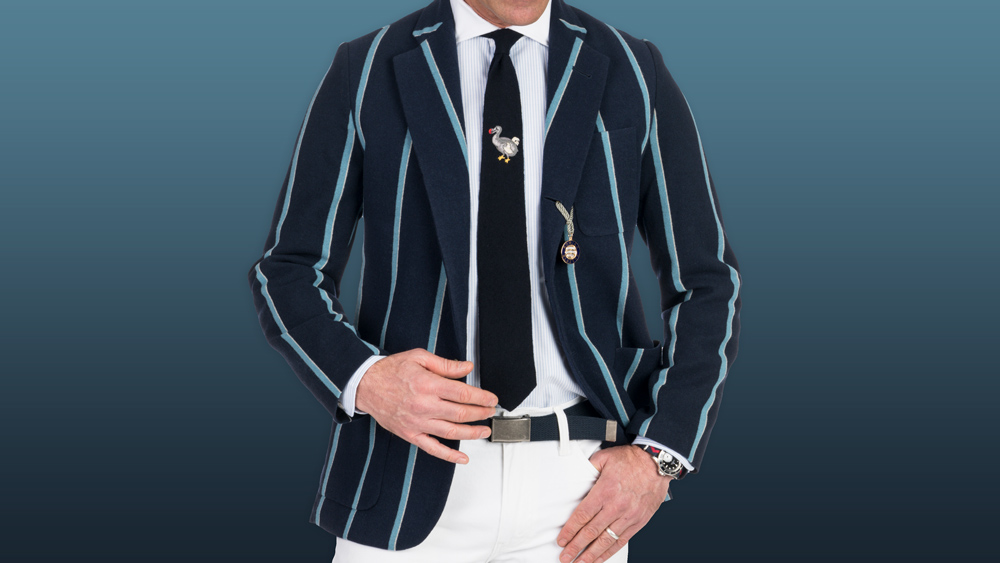 A former rowing team captain for Georgetown and Oxford universities as well as a three-time member of the U.S. rowing team, Jack Carlson is steeped in the heraldry and tradition surrounding the sport. Unlike most sporting kits—with their ill-fitting jerseys and polyblend shorts—rowers have a decidedly natty uniform: blazer, oxford, tie, and trousers.

It was during Carlson’s time at Oxford that he began researching the history behind the rowing ensemble, discovering that blazers as we know them today originated as boldly colored jackets for college rowers. Carlson emerged from his studies as a veritable expert on the subject, ultimately publishing a 256-page coffee-table tome dedicated to its history.

Now, 3 years after releasing his book, Carlson has launched his own collection inspired by the sport, fittingly named Rowing Blazers. The line synthesizes the many quirks and flourishes Carlson gleaned during his research into a range of charming jackets, shirts, and ties that appeal even to those of us whose athleticism is reserved to taking the stairs.

All of the jackets (from $550) have an Ivy League classicism—think three-roll-two silhouettes, patch pockets, and cast brass buttons— embellished with rowers’ talismans like cloisonné enamel buttonhole fobs and Latin proverbs cross-stitched under the lapels.

The collection’s oxford cloth shirts ($175) are decidedly less put together, coming distressed with frayed collars and seams. They evoke a casual, devil-may-care attitude—an effect desired, as legend has it, by Princeton rowing hopefuls who would purposefully beat up their shirts in an effort to appear more experienced. The ties (from $79) are also steeped in rowing tradition, embroidered with a host of cheeky motifs—from a mythological siren to palm trees—that correspond to various bits of the sport’s folklore.

While many of the rowing-insider references may be lost on laymen, Rowing Blazers makes a compelling case for dressing like you’re part of the club.