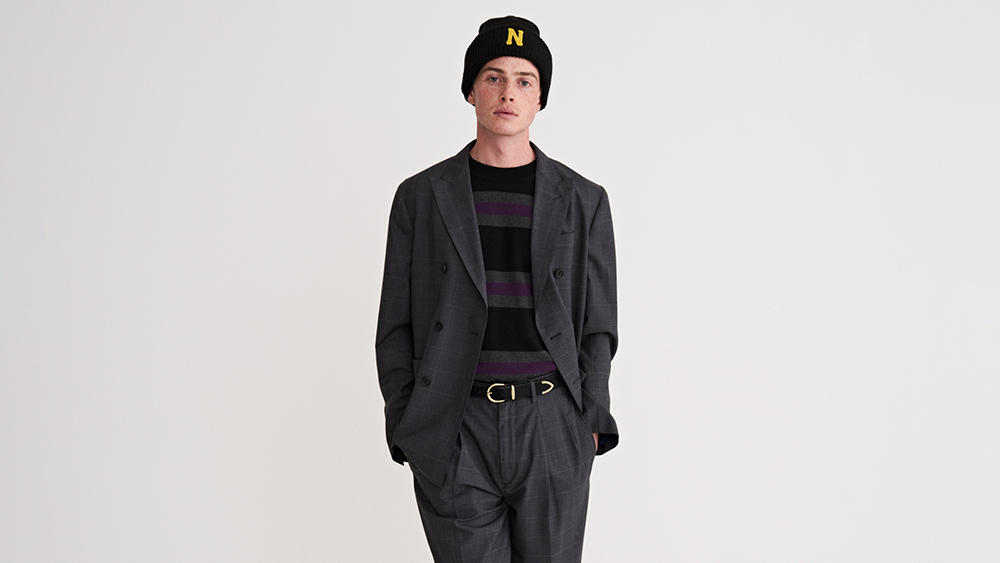 “In a way, it was a weird type of punk maneuver,” says Brendon Babenzien of Noah, explaining his decision to offer tailored garments in his collection, which is better known for a kind of downtown zeitgeist than traditional formalwear. Given his resume (namely, as creative director of eminent streetwear brand Supreme), Babenzien’s shift toward more grown-up garments caught many pleasantly off-guard.

When Babenzien launched Noah in the fall of 2015, smatterings of Supreme were evident but, on the whole, it was a more mature collection—equal parts nostalgic and refreshing, with a handful of preppy and sportswear staples laced with sub-cultural references. There was one piece of particular importance in that debut collection: a double-breasted jacket cut from camel wool with purple and green pinstripes. At once elegant and irreverent, it was a DB that appealed to streetwear-obsessed teenagers and middle-aged men rebelling against the status quo.

Since then, tailoring has been a constant fixture at Noah and, this fall, Babenzien has doubled down on the category. The new DIY Suiting collection is his most ambitious tailoring range yet, consisting of three sport jackets, five suits (all sold as separates) and four pleated trousers to be mixed and matched. “I think we’ve really hit closer to the mark than ever before,” Babenzien, who in May was named J.Crew’s men’s creative director, tells Robb Report. “The best thing about evolution is that we’ll get better and improve as we go forward.”

Noah’s unique take on tailoring is largely thanks to Babenzien’s youthful interests. He cites both Robert Smith of The Cure and Bryan Ferry of Roxy Music as sartorial influences—they wore suits for pleasure, not work, and they did so with serious swagger. Growing up in Long Island and being immersed in skate culture from a young age instilled him with “a fierce sense of independence” to buck convention. As a designer, it means that he doesn’t adhere to trends. Where others are proclaiming that the suit is dead, Babenzien recognizes its newfound potential.

Babenzien admits that he lacks any real tailoring experience, however he makes up for it with a keen eye for fabrics. “It’s something that runs through a lot of what I do. My belief is that you can make a great garment just by using great cloth,” he says. For this collection, he worked exclusively with English mills because, he says, they “pretty much invented these things.” From earthy brown houndstooth and gun club checks with plenty of drape to plush corduroys, the fabrics he’s chosen are decidedly traditional but rendered with slightly heavier weights, meaning the jackets are substantial enough to double as outerwear.

The jackets are all made in Italy, unstructured and with a generously oversized fit. Meanwhile, the trousers are cut on the roomy side with a single pleat for volume, comfort and swagger. “We do want to present a more relaxed and casual look overall. We do that by relaxing the construction and we’ve gone further this season than we have in the past,” he says.

While the future of tailoring is going to rely on creative, free-thinkers like Babenzien to release it from its stiff shackles, responsibility also falls upon the wearer. When pushed for styling advice on how people can adopt new ways of wearing suits, he gives a typically fashion non-answer: “The only advice we give is to be yourself, be confident in the choices you’re making and just do it. Don’t worry about what I say, or what anyone else says. Do you because it’s much more interesting. To me, the most punk thing you can do is just that.”