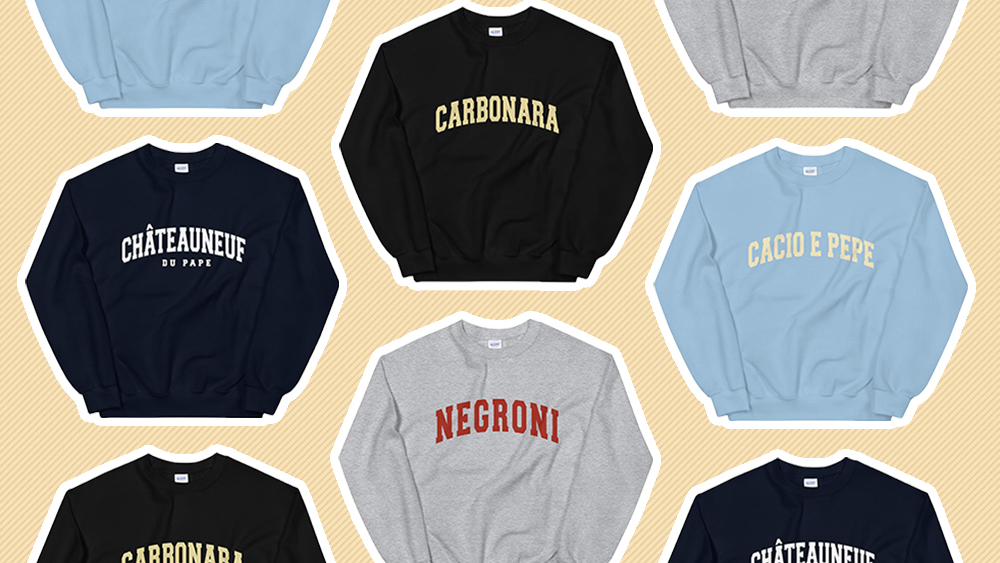 Clothes don’t often spark real joy, but it’s hard not to find yourself smiling when presented with the designs of new British sportswear brand Novel Mart. “That’s kind of the point,” says founder Lucas Nicholson. “People see our merch and it speaks to them on such a clear level: ‘That’s my favorite food’, ‘That’s my go-to drink’. It resonates.”

Nicholson is referring to Novel Mart’s quirky faux-Ivy League sportswear staples: sweatshirts, T-shirts and caps, all of which are emblazoned with indulgent food and drink motifs. From baseball caps bearing fried chicken legs to hoodies printed with ‘Châteauneuf-du-Pape’ across the chest, Novel’s sportswear is supposed to be both “tongue-in-cheek and accessible.” The brand launched in June, and has since racked up more than 12,000 Instagram followers and sold thousands of pieces. Proof, as the old saying goes, that you eat with your eyes first.

Nicholson is 31 years old and the former European sales manager at thoroughbred menswear favorite Drake’s. He left the haberdasher just a few shorts months ago and embarked on Novel Mart initially as a means to keep the wolf from the door. “I’d been in lockdown for weeks and I was going crazy,” he says. “I’m a high energy guy, I don’t like sitting on my hands. I wanted to do something new and was looking at lots of brands for inspiration. I didn’t want to do something tailored—I couldn’t see how I’d fit into the classic menswear scene and differentiate myself in what is already a crowded space.”

The solution, as it turned out, was to approach a broader fashion trend from a foodie’s viewpoint. “90s sportswear has been trending for a while, both in mainstream men’s and women’s fashion,” Nicholson says. “It felt very relevant during lockdown. People wear it around the house and in the neighborhood, and fun branding or logos help to elevate those pieces. Combine that with my love of eating and drinking, and it was a natural leap to create a range of merchandise for the food and drink I enjoy.”

It’s intriguing that Nicholson left the world of Drake’s—mothership of the tweed sport coat and necktie—and dove headlong into hoodies and sweatshirts. But really, this is a return to form, he says: “Before Drake’s, I was a huge Ralph [Lauren] fan. When I was a student I wore Ralph head-to-toe. I’ve always been interested in the preppy look, especially the sportswear element, so it made sense to lean into that.”

The fact that Nicholson refers to Novel’s offering as “merch” rather than product also belies this return to his style roots. “We don’t take ourselves too seriously,” he explains. “Yes, this look is on-trend for a lot of people but our stuff can also be a social signifier. People want to feel part of something, especially during lockdown when so many people are feeling more isolated than ever. Food and drink is so emotive and so culturally significant, it just kind of grabs people, I think.”

Perhaps Novel Mart has also taken off because Nicholson’s clothes are both physically and psychologically comforting. Quite apart from being cozy sportswear-cum-loungewear, Novel’s branded tops are wearable comfort food, from ‘Lasagna’ sweatshirts to ‘Dim Sum’ tees. Moreover, the range of dishes referenced in Novel’s designs—like Spanish ‘Boquerones’, Swiss ‘Raclette’ and Japanese ‘Tonkotsu’—reinforce the power of food to transport, and conjure memories of family dinners, dishes discovered while traveling or food enjoyed with friends.

At a moment when we’ve been living in pajamas and ordering take-out every other evening, a stylish club sweatshirt that reconnects us with our foodie memories is both practical and a welcome comfort blanket.