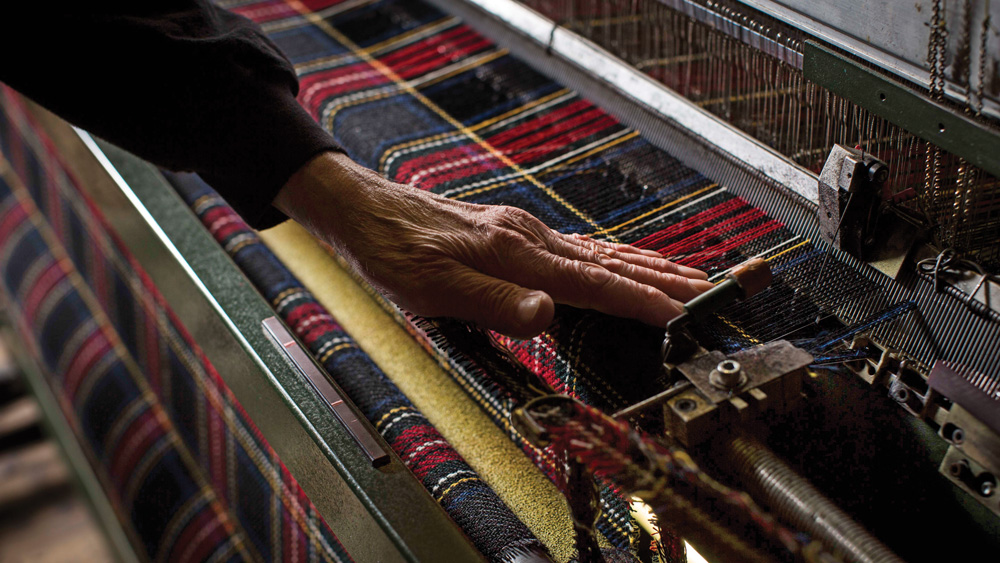 Harris Tweed is the ultimate bespoke fabric. Still painstakingly produced by individual weavers in their own homes, on looms unchanged for centuries, it can be customized to almost any whim. Patterns and colors are limitless, spanning the traditional dun greens and browns and hunting herringbone to the bright scarlets and yellows preferred by Vivienne Westwood or Yves Saint Laurent. Even the weave can be tweaked and adjusted to best suit its final purpose. The most common, of course, is clothing: When destined for a jacket, where softness and strength are both vital, the looms will be strung with 1,400 warp threads. The other regular use is as furnishing fabric—whether for throw pillows, blankets, or even sofa and chair upholstery—where 1,600 threads will be more durable.

Indeed, the only constant is the production process, which is ferociously policed to protect the quality of Harris Tweed. It was the early 20th century when a quality mark was first registered: a crowned orb, which is still stamped in wax on every bale of cloth. That symbol, so synonymous with royalty, was an explicit nod to King Edward VII, who had just popularized this tweed among the British aristocracy. It was ideal for country pursuits and life outdoors, he realized; windproof and highly water resistant, it was performance fabric long before there ever was such a thing. Gore-Tex, eat your heart out.

The royal family has long loved the Outer Hebrides, an island chain off the west coast of Scotland that’s the last scrap of the British Isles before North America (indeed, Prince Charles spent a cherished year there incognito as a teenager, working on a farm). It was there that Queen Victoria’s son and successor first saw this material, which was originally produced by the islands’ subsistence farmers or crofters. Loath to waste the wool of the sheep they kept, they built rickety handlooms and spent long evenings spinning and weaving the wool into a fabric that was ideally suited to the rugged life of the isles.

Today, true Harris Tweed must be produced in exactly the same way. Every piece must be made in the Hebrides, hand-spun, hand-woven, dyed, and finally finished. This process, known as waulking, sets the dyes, shrinks the weave to boost its waterproof properties, and raises the nap to make the tweed softer.

Commissioning a custom pattern is straightforward; this industry was built on small-scale production and limited orders. Contact one of the mills there, like Harris Tweed Hebrides—it acts as a broker between customers and the more than 140 or so independent hand-weavers who still practice the craft. The minimum order is 50 meters (around 164 feet) of tweed with a turnaround time of 12 to 14 weeks. The mill has its own in-house design team, which will develop the initial pattern for a customer’s approval as it does for up to 1,000 different clients, both corporate and private, each year. Once the customer signs off, the mill will supply the threads, string the loom for the weaver, and handle the waulking. Prices range between $50 to $75 per meter.

The other option is to make a pilgrimage to the production site and supervise the process personally. Some weavers will work directly with clients rather than rely on the mills to act as middlemen. One of the best known of these is Donald John Mackay. He accepts private commissions with a minimum order of 25 meters of tweed, with costs and timings comparable to working via the mill. He can also produce fabric for both clothing and upholstery. Mackay doesn’t use email, though he’ll answer the phone (+44.1851.550261); the best way to work with him is undoubtedly in person. Like most weavers in this cottage industry, Mackay works from a small shed in the yard of his house. Inside it, other than the click-clack of his Rube Goldberg–esque loom, the only noise is lilting Scottish folk music piped in by the tinny radio in one corner. A furrow-browed man of few words, nothing makes him brighten as visibly as the promise of a custom project, however complex the color or pattern might be. “Nothing is too hard to do,” he says. “It just takes some time to set things up.” Harris Tweed, of course, has taken centuries.