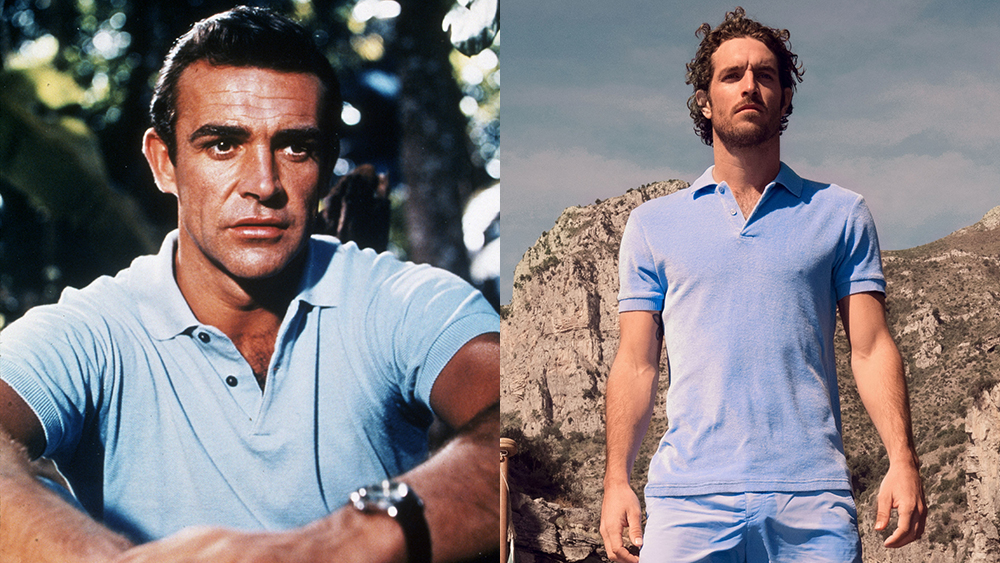 If you’re a fashion designer who makes clothing for men, it’s pretty hard not to occasionally think about James Bond. After all, the character is pretty indelibly linked to a wide array of menswear staples—not to mention a very cosmopolitan brand of masculine cool—thanks to a series of global blockbusters.

But Adam Brown, co-founder and creative director of the swimwear-focused line Orlebar Brown, says he’s had 007 on the brain since he first started the brand.

“Bond over the years has definitely played a part in my creative process,” Brown said during a recent phone call. “When I started Orlebar Brown 12 years ago, [I had a] picture of Sean Connery in Goldfinger in the blue onesie—it’s one of those pictures that appear on mood boards for many brands, I’m sure.”

One of the pieces in the collaboration is a modern re-issue of the safari jacket Roger Moore wore in 1974’s ‘The Man with the Golden Gun.’  Danjac LLC, Metro-Goldwyn Mayer, Eon Productions, Orlebar Brown

Flash forward to 2019, and Brown—who dressed Daniel Craig’s Bond in Skyfall and designed a swimwear collaboration with the film series’ producers last year—is now making an up-to-date version of that onesie. It’s just one piece in a collection of 15 that’s slated to hit stores on May 15, with a few special pieces coming out in June.

The collaboration’s genesis grew out of scenes from the films that have something to do with water—Orlebar Brown is, after all, a brand primarily concerned with outfitting you for the beach and pool. It references pieces worn by Sean Connery, Roger Moore and George Lazenby in films spanning over two decades, from Dr. No to A View to Kill. In it, you’ll find everything from re-creations of Moore’s safari jacket from The Man With the Golden Gun to Brown’s personal favorite piece: a pleated linen evening shirt modeled on the version Lazenby wears on the beach in On Her Majesty’s Secret Service.

“Linen is an Orlebar Brown fabric,” Brown said. “And a pleated linen evening shirt, you don’t necessarily have to wear with a bow tie. Plus I like the humor of it. I think it’s a very romantic item.”

And at the end of the day, the reason guys want to dress like James Bond isn’t just that he wears nice shirts. “The styling is clearly one element of the personality of Bond. All the other elements feed into the styling. And they’re beautifully styled films,” Brown said. “But the styling of Bond is also what he’s doing, what he’s wearing, who he’s with, what boat he’s in, what car he’s in, who he’s chasing, whatever he’s doing.”

Asked whether he had any predictions—or suggestions—for who might do all that wearing and chasing after Craig retires from the Bond franchise, Brown was circumspect. “I cannot get involved. Absolutely not.”

As for another collaboration? Never say die.