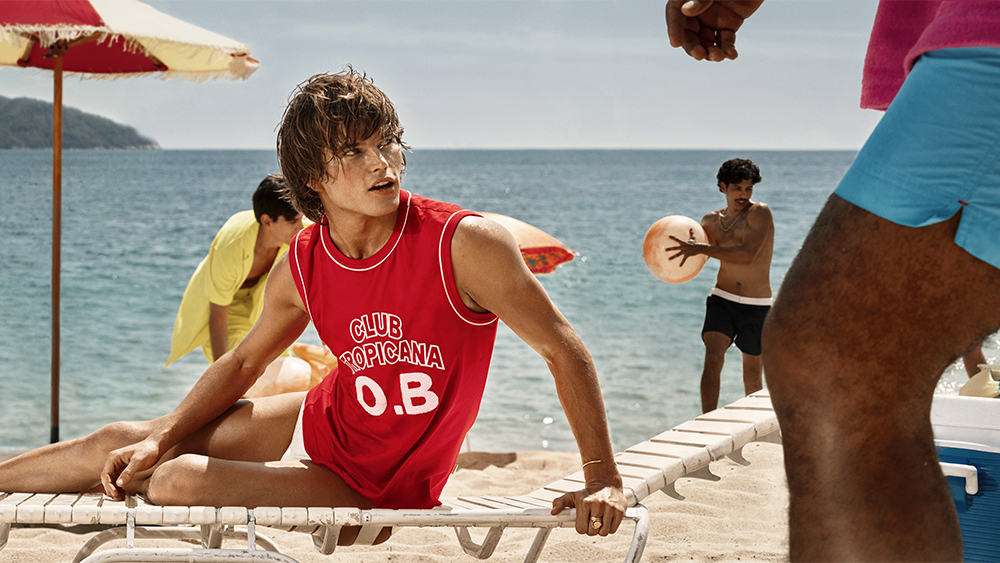 Watching the music video for Club Tropicana, Wham!’s 1983 hit, one could easily mistake the poolside revery for an Orlebar Brown campaign. While the British brand wasn’t yet in existence—this year, it’s celebrating its 15th anniversary while Wham! celebrates its 40th—the purveyor of suave beachwear is a sartorial manifestation of the “fun and sunshine” of which the Brit Pop duo sang. And given their mutual milestones, it seems fated that the band and the brand have teamed up on a capsule collection called—you guessed it—Club Tropicana.

“[The song] was written as an ironic take on our clubbing experience,” Andrew Ridgeley, one half of Wham!, recalls of his partying days with the late George Michael. “But for most people, it was quite literal. It expresses most people’s idea of a perfect summer holiday.” Now, Orlebar Brown has created an attendant wardrobe.

Club Tropicana’s music video, which was filmed on location at Pikes Ibiza and helped make the hotel a rocker destination, has inspired a range of swim trunks, polos and leisurewear in poppy hues and prints with a certain vintage appeal, from graphic geometric patterns to a Carmen Miranda-worthy fruit assemblage. Many of the designs take their cues from the duo’s ensembles in the video, which unintentionally became a summer fashion mood-board.

“There wasn’t a stylist,” Ridgeley says discussing the video’s looks. “George had been in Ibiza a week before the shoot and he had bought a couple of things in town…The rest was stuff we owned.” That may be why their looks are pitch perfect vacation attire—they’re effortless.

Our favorites include a breezy Capri-collar popover, striped terrycloth polo and roomy cotton-linen trousers. The collection, which is available on Orlebar Brown’s website, is full of clothes for carefree days lounging by the water and steamy nights on the dance floor—precisely what you’ll want to pack for getaways to wherever your personal Club Tropicana is this summer.