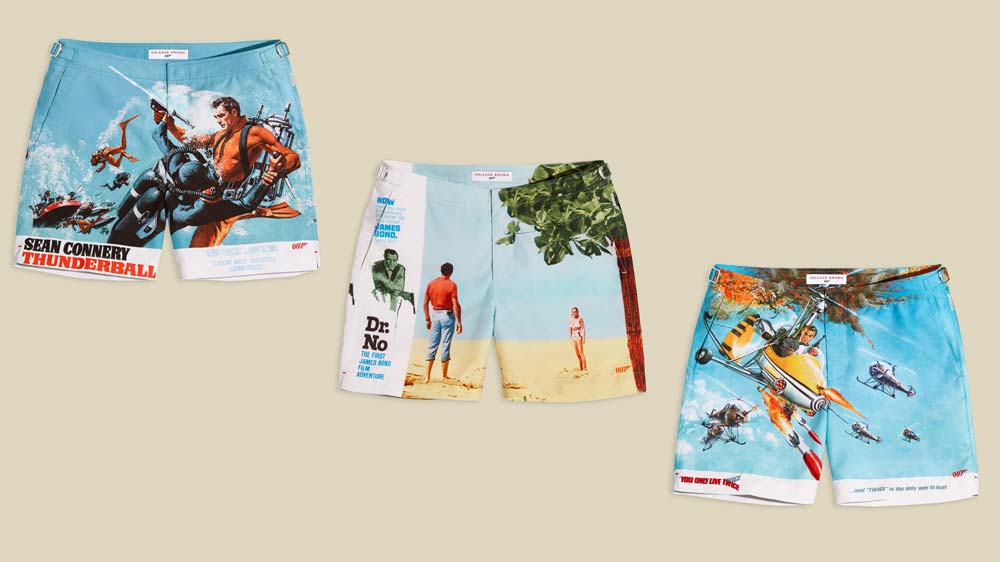 James Bond is a perennial source of fashion inspiration for brands looking to cash in on 007’s sartorial style. Most recently, Sunspel partnered with Ian Fleming’s estate to create a line of luxurious basics that draw on the author and his character’s style. Now, British luxury swimwear label Orlebar Brown is serving up another inspired collaboration, releasing an exclusive new collection of swimwear inspired by the world’s most famous action hero. Partnering with EON Productions, a U.K.-based production company that makes Bond films and controls worldwide merchandising, Orlebar Brown has made its latest splash with four new swim shorts printed with James Bond poster imagery. The collection debuts with snapshots taken from the promotional material from early Bond films such as the original Dr. No (1962), Thunderball (1965), You Only Live Twice(1967), and Live and Let Die (1973).

In the original 1962 film, Sean Connery was pictured wearing pale blue shorts while walking along the beach with original Bond girl Ursula Andress. Those shorts inspired the backdrop of the swimwear collection and brought the Orlebar Brown and James Bond story full circle when Daniel Craig donned the brand’s pale blue Setter shorts in Skyfall in 2012. The swimwear for this collection, however, come in Orlebar Brown’s best-selling, mid-length Bulldog style.

Images on the shorts include scenes like Bond piloting an autogyro dubbed “Little Nellie” (in a rather cheeky placement)from You Only Live Twice that was designed by artist Frank McCarthy in 1967. Another pair, designed by Robert McGinnis with photography by George Whitear, has a film still of Bond using a Glastron GT150 speedboat to evade his pursuers in Live and Let Die that was originally used on lobby cards in U.S. theaters.

The new collection of swimwear, retailing for $395 each, is available exclusively at Orlebar Brown stores and online starting today. The collaboration will be an ongoing one, so stay tuned for more 007 attire.