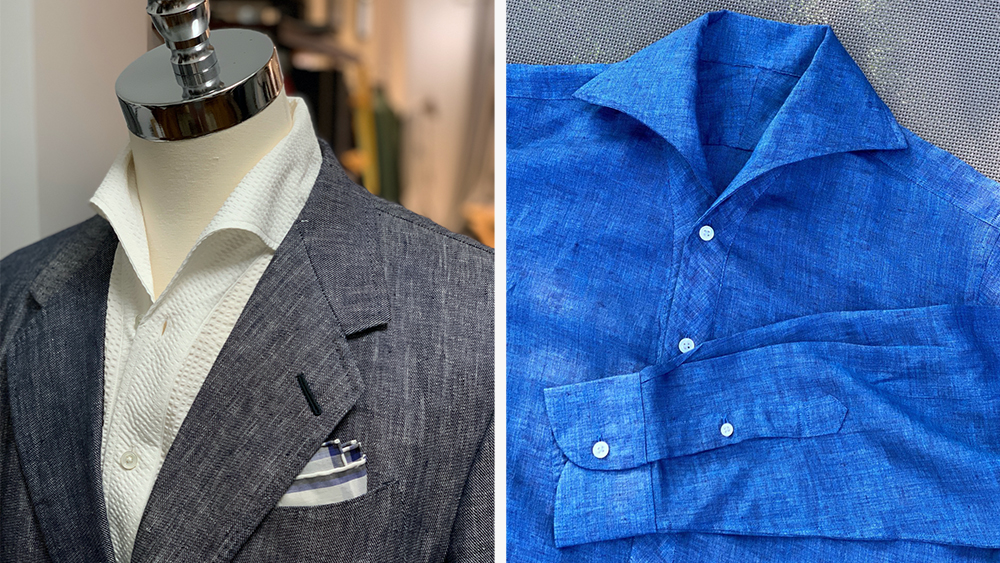 Necessity, as the old adage goes, is the mother of invention. When the pandemic forced bespoke tailor Paolo Martorano into lockdown, he turned lemons into luxury casualwear. Since the majority of his clients had fewer occasions to don the suits that are Martorano’s bread and butter, the alumnus of Alan Flusser and Paul Stuart began applying his tailoring chops to categories once unthinkable for a practitioner of menswear’s highest art form: polo shirts, pajamas—even bespoke boxer shorts. Now, Martorano is bringing his newly expanded offerings out East with a three-day residency in Southampton.

From tomorrow through Thursday the 27th, Martorano will set up shop at Cashmere Emporium on Jobs Lane (a swimsuit’s throw from Southampton’s Main Street). He’ll be joined by venerable Savile Row shoemaker Gaziano & Girling, which will provide its full collection of ready-to-wear shoes in addition to made-to-order and bespoke commissions. For his part, Martorano will offer his entire bespoke repertoire, fitting shoppers for everything from fall and winter suits to the latest, breezier designs. To ensure safe social distancing, appointments can be booked via his website.

Martorano began dipping a toe into casual attire with a sartorial soul even before quarantine upended dress codes. “When I met with customers around the country, a lot of them spoke about how they wished they could buy sportswear from specific brands from Italy or France but have it custom-made for them,” he says. “So I started making different kinds of vests, in quilted nylon from Loro Piana cashmere, tweed, suede, even linen. We do basted fittings for the vests, just like we do with jackets, so you can really dictate the fit and options that just don’t exist if you’re buying something off the rack.”

Martorano’s bespoke gilets were gaining popularity before lockdown and continued to be a top seller through March. In the early months of the pandemic, he says the appetite for traditional tailoring didn’t wane all that much. Some new clients, unable to access their usual tailors in England or Italy, even shipped Martorano their existing Savile Row suits to measure in lieu of an in-person fitting. Business was so strong, in fact, that he hired two new tailors who’d become available as a result of another business’s closure.

As one of the few remaining bespoke tailors in the United States, Martorano can be uniquely nimble in accommodating clients. That’s one of the reasons why men began looking to him for more relaxed clothing once the weather began to warm. Answering the demand, he introduced bespoke polo shirts with “a collar that stands up nicely under a jacket” as well as more conventional dress shirts rendered in laidback textiles like seersucker, denim and cashmere-silk blends. One of Martorano’s personal favorites is a new one-piece collar—an artfully-crafted design akin to retro Capri collars—that can be made in a variety of shirt styles.

“A lot of guys consider shirts as undergarments and don’t usually buy them out of a love of how they look,” he says. “This is one of the few shirts in my career that has sold like that—men are buying it because it’s a cool, singular item and they’re not thinking about what jacket or trousers it goes with. It looks great on its own.”

Several longtime clients had been asking him to do boxers for years, and now one can order monogrammed trunks made up in the same fabric as their shirts—surely one of the most luxurious underpinnings on the market. Similarly, Martorano has ventured into loungewear with two models of meticulously tailored pajamas, the first samples of which will make their debut at the Southampton pop-up. While he’ll be offering the PJs on a made-to-order basis, Martorano will gladly give them the bespoke treatment: “If someone has a very unique idea of what they need to sleep in, we can accommodate that. I don’t know what that could be but it’s bespoke—we’ll do anything you can imagine.”