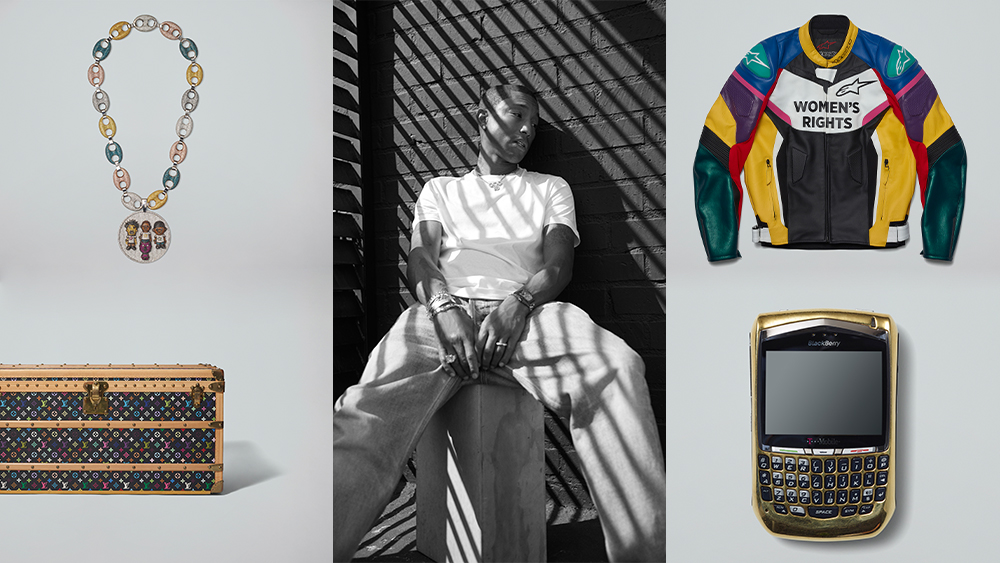 Pharrell has another new way to make you happy. The music industry’s most prolific renaissance man has just launched Joopiter—a new auction platform poised to give StockX, Christie’s, Sotheby’s and Phillips a run for their money.

Joopiter will run online-only sales, similar to StockX, but will aim to create a white-glove experience akin to the more traditional auction houses. To mark the site’s debut, the musician, producer, rapper and businessman himself will be auctioning off a slew of his personal items this month. The exact date of the sale has yet to be disclosed, but you can expect everything from a gem-encrusted N.E.R.D belt buckle and a 20-plus-carat Asscher-cut diamond ring (both custom) to iconic pieces of clothing like his famous Vivienne Westwood hat to prototypes from his BBC, Ice Cream and Bathing Ape lines.

“All jewelry designs were inspired by something or someone or some situation in a time and space where the conditions were particularly inspiring or even challenging for that epiphany to come through and inspire something new and challenging to the space,” Williams told Robb Report as part of an exclusive interview (an extended version will run in the upcoming November issue).

Plus, there is some pretty serious wrist candy up for grabs. Who wouldn’t want to own an 18-karat yellow gold Audemars Piguet Skeletonized Perpetual Calendar that once graced the musician’s wrist? Watches from Chopard, Jacob & Co. and others will also be in the mix, but, so far, none of his Richard Mille timepieces.

Williams says he has about 52 items he’s putting on the proverbial block. But he adds, “I have probably three or four times that in terms of what I’m gonna let go. So it’s gonna be it’s gonna get crazy.”

If you don’t end up getting your hands on any of the “Happy” singer’s goods, however, there are plenty of high-profile auctions to come. “There’s a nice long line of folks that are going to do some really amazing high profile auctions behind me,” says Williams, who wouldn’t disclose yet who would be participating but given his connections it should be an A-list roster. “They’re all like, stocked and ready to go and do some crazy things.”

The site was designed in partnership with ALASKA ALASKA, a design and creative service firm created by the late Virgil Abloh. To match what will surely be a forward-thinking (and looking) auction platform, Williams is planning to dial up the provenance bragging rights of the pieces by featuring videos of his coterie of famous sellers talking about the stories behind their pieces in 20- to 30-minute videos.

“I’m known for being a storyteller, whether it is, you know, making songs with Jay-Z and making sure that we’re telling the greatest story, whether it’s about a club, or it’s about something that’s going on in his life, or his videos or a movie that we have about Katherine Johnson and the women out of Hampton [Virginia] that worked for NASA [in the film Hidden Figures],” says Williams, illustrating a few of many projects his talent has touched over the span of his career.

To catch the latest chapter in the multihyphenate’s story—and perhaps own a bit of his history, too—you will want to sign up for the site’s newsletter to get the scoop on the latest Joopiter auction and drops. A live preview of the pieces up for grabs in Pharrell’s personal “Son of a Pharaoh” auction (named after his father) will take place in New York on October 14 and 15. The location has yet to be disclosed, but the site is said to go live sometime shortly thereafter.

Joopiter will also be selling merch for those that aren’t quite ready to invest in Pharrell’s treasure trove.