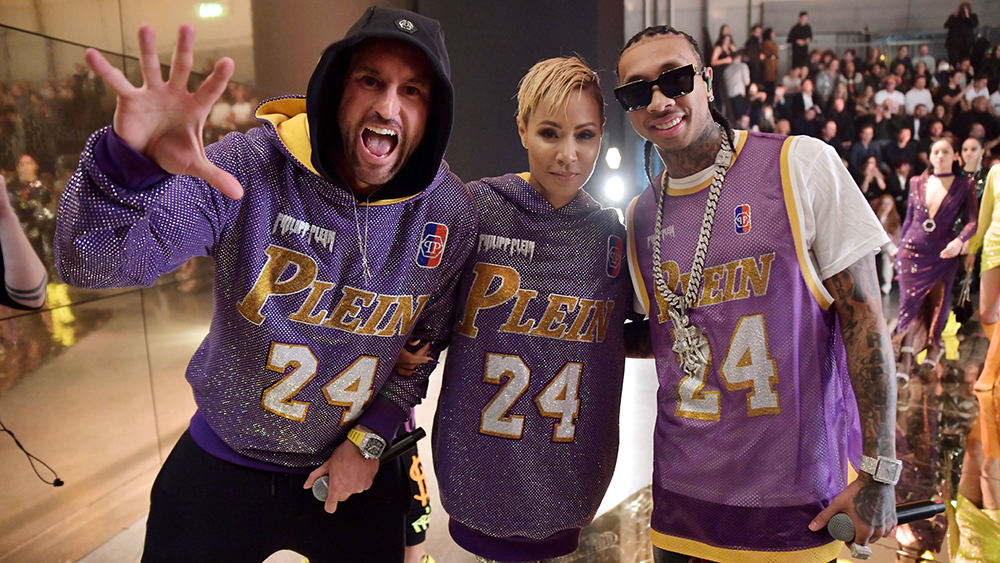 They say there’s a time and a place for everything. But designer Philipp Plein’s rhinestone-studded runway tribute to the late Kobe Bryant, which used not one but two golden helicopters as stage props, has proven to be a head-scratching exception to that rule.

The German fashion designer earned the justified ire of both professional and amateur fashion critics on Saturday with a show he staged during Milan Fashion Week. The collection included a limited-edition selection of purple-and-gold jerseys ($2,070), hoodies ($3,150) and sneakers ($2,200) that take their styling cues from Bryant’s iconic Lakers jersey.

The designer replaced the team’s name with his own on these garments and rendered all the letters and the Lakers legend’s number, 24, in glittering crystals. Bryant’s name is nowhere to be seen, but the back of the jersey and hoodie include a rendering of a black mamba—an homage to the basketball player’s nickname. (Plein says the sales will support the athlete’s Mamba & Mambacita Sports Foundation.)

On their own, these items might have passed muster, but Plein’s set design pieces for the show proved too much for some onlookers to bear. “Philipp Plein made two gold helicopters for his show today, which falls 27 days after Kobe died in a helicopter crash,” one observer pointed out on Twitter. Another called the choice “Distasteful, tacky & material waste. Philipp Plein, who has so long been making clothing that adds nothing but clutter to the fashion landscape, has decided to include gold helicopters along [with] his crystal basketball jerseys after the passing of Kobe & Gianna Bryant. [It’s] disgusting.” We can’t argue.

In a statement to Page Six, Plein said he didn’t have time to remove the helicopters (which appeared alongside a tableau of land, sea and aircraft commissioned for the show in November) and lamented that his intentions were misunderstood.

Missy Elliott sitting in the front row at the Philipp Plein’s fall 2020 show. Above, Plein with Jada Pinkett Smith and Tyga.  Swan Gallet/WWD/Shutterstock

“I would have clearly removed them if possible, but it was too late to replace [the helicopters],” Plein wrote. “This tragedy affected myself and all the world deeply and I feel that my fashion show have [sic] been the best moment to express my respect and admiration for Kobe Bryant, his daughter Gianna and his family.”

“It is sad to see how something positive and constructive can be misinterpreted by people who obviously want to interpret negatively without even having a reason. As a matter of fact, I am really doing something to help and to support the foundation. Actions speak louder than words.”

If actions speak, inaction must scream. Unless the gold helicopters were welded in place inside of Plein’s fashion show venue, he could have simply… not used them at all. That he proceeded to include two obvious symbols of the Bryants’ untimely demise alongside clothing that riffs on Kobe’s legacy is nothing less than disrespectful. And his inability to apologize for such a flagrant mistake indicates that he doesn’t think he’s done anything wrong at all. While we would normally commend a fashion designer for contributing to charitable foundations in the aftermath of a tragedy like this one, Plein missed the point. So let us clarify it for him: It’s not about you. Next time, take the high road and make an anonymous contribution, just like everyone else.