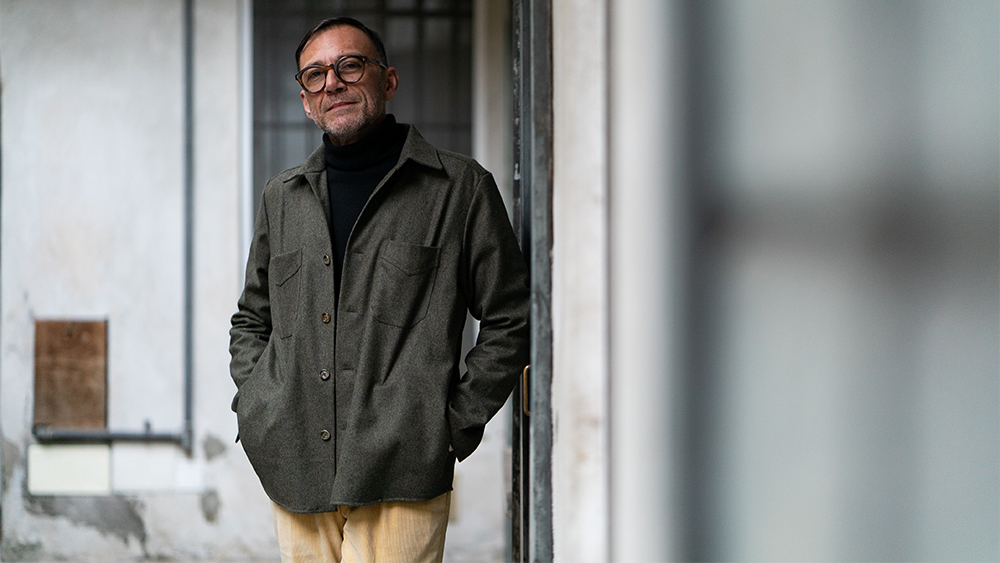 It could be said that Gianluca Migliarotti is a man used to wearing many hats. After all, he’s the founder and creative director of Pommella-Napoli and a documentary filmmaker who has captured Italy’s bespoke tradition in films like O’mast and I Colori di Antonio. And yet, Migliarotti expresses a particularly contagious enthusiasm for his latest hat.

“My reversible bucket hat is for people who ride boats, go fishing and ride bicycles in the city—in Italy, not many wear helmets on a bike,” Migliarotti says. “It’s the emergency hat for wherever you are and [whenever you] need to cover your head.”

The literal hat Migliarotti is referring to—which zips into itself and features an inside pocket for storing cash or cards—is a standout piece from his latest figurative hat, the brand PML. Quietly launched several months ago, PML was initially a Pommella-Napoli side project intended to offer a more affordable take on the brand’s famous bespoke trousers. However, PML soon took on a life of its own.

“It’s becoming my main thing because I fell in love with it,” Migliarotti says. “It’s my little project and I opened it up to other things such as hats, polos, shorts, overshirts… I like to explore more with it. I don’t want it to have a regional character, so there’s no Naples in it. It’s about my vision of things I like, and I personally want to wear—and, of course, quality.”

You’ll find the trousers that first inspired PML among the brand’s ready-to-wear selection online. They differ from Pommella’s in that they are machine-made but, otherwise, they offer a lot of the same appeal: a similar fit and details including side adjusters, a single pleat and Thomas Mason linings (the trousers, as well as PML’s overshirts, shorts and polos are also available made-to-order).

And where Pommella is exclusively devoted to waist-down garments, trousers are just one entry in PML’s sportier and more casual world, which also includes seersucker shorts in green checks or cream stripes, the aforementioned foldable bucket hat, timely but playful ‘Bandido’ masks and sumptuous chenille terrycloth polos with generous pointed collars that recall breezy days along the Gulf of Naples.

“It’s a memory from my childhood in Capri. I remember chenille being a material used profusely for light bombers, jumpers, polos…I loved it!” Migliarotti says. “It gives a sense of comfort and uncommon style: pretty unique, never stiff, and fun. It means seaside for me.”

Aside from a certain sense of carpe diem, the disparate elements that make up PML’s collection are also united by origin. “Anything that comes out of PML is made in Italy, because that’s the place where I live and where I’m lucky to find all the makers of the best quality garments I can imagine,” says Migliarotti. “As a filmmaker, I like to tell Italian stories because I think you should tell stories you know and understand better. I think in a similar way about Made in Italy.”

Migliarotti is currently ideating PML’s fall/winter offerings, which might include five-pocket corduroy trousers and a reversible raincoat, but only if they pass his very hands-on test. “It takes some time for me because I need to make prototypes to test myself before going to production. I’m not going to offer anything I am not sure I personally enjoy myself.”

One PML endeavor he feels particular excitement for is a capsule collection with Fox Brothers, which yielded a ‘Palazzi flannel’ fabric named for Alessandro Palazzi, the legendary bartender at Dukes Hotel in London. The flecked green wool flannel was used to make a watch strap, a newsboy cap and a flat-brimmed army hat in addition to a dual chest-pocket overshirt that quickly sold out but is currently available for pre-order.

When asked how Palazzi’s name came to grace the flannel, Migliarotti launches into a story.

“I was delivering a pair of trousers for my friend Alessandro Palazzi, for which I chose the fabric. I was with my friend Douglas Cordeaux, the owner of Fox Brothers, and we went together to Duke’s bar for a fabulous drink. When Douglas saw the trousers, he was impressed by the interpretation of that particular green flannel and we celebrated that moment, the three of us together. He had the idea to make it an exclusive for us and to name it after Alessandro Palazzi. I think it brings a few different values together at once: quality, friendship, joie de vivre and of course style. Lifestyle has to have a meaning.”

Bike rides, seaside holidays, a round of martinis with good friends: it seems like every PML piece comes back to Migliarotti’s joyful embrace of life, which, fortunately, he is more than willing to share.