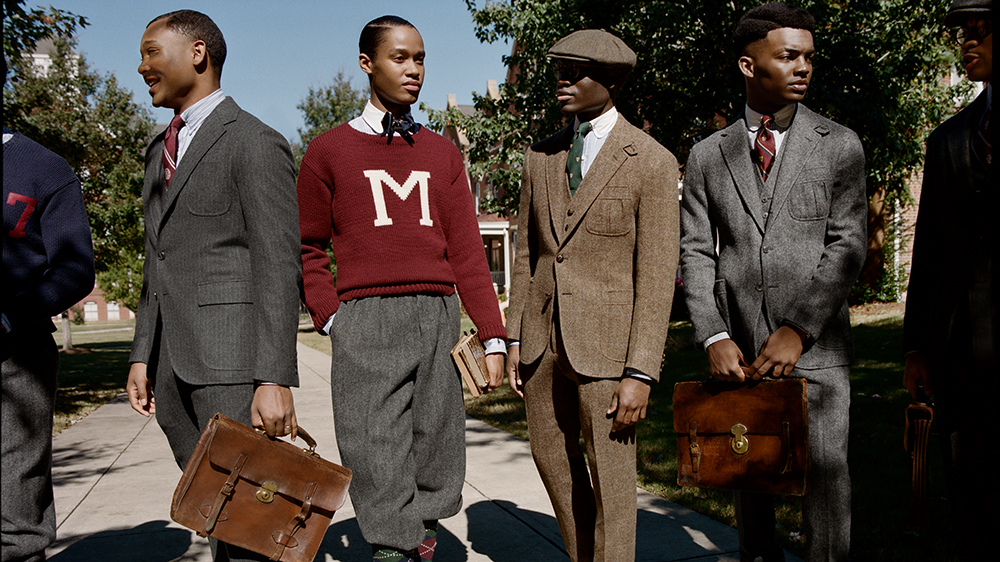 Later this month, a first-of-its-kind collaboration from Polo Ralph Lauren will turn the spotlight on Black collegiate style.

In partnership with two historically Black colleges in Atlanta, Morehouse and Spelman, the brand has created a capsule collection inspired by the unique style of students who attended these institutions and others like them from the 1920s to 1950s. The offering of menswear and women’s clothing, which launches on March 29,  is full of nostalgic styles, from knitwear featuring the colleges’ letters to classic tailoring. It also features footwear and accessories designed to capture the colleges’ history and contributions to American style. The pieces will range from $20 to $2,500.

Conceptualized by alumni of Morehouse and Spelman who work at Ralph Lauren, the styles reframe the narrative that American collegiate style was developed primarily on Ivy League campuses. Both schools shared images and historical artifacts to give the capsule a feeling of authenticity. “By sharing the early history of Spelman, as reflected in archival research, through clothing, the collection encourages conversations about the creative power of the Black experience and the ways in which a personal fashion aesthetic intersects with institutional values of solidarity and connection,” says Mary Schmidt Campbell, Spelman’s president, in a statement.

This collection is the first time Ralph Lauren, known for its collegiate look, has partnered with an institution of higher learning on a clothing line. It’s also the first time the brand has produced a campaign with an all-Black cast in its 55-year history. (In fact, most of the models are students, faculty and alumni from the universities.) The company also tapped an all-Black team of creatives, including photographer Nadine Ijewere.

“This collection expresses the spirited history, deep sense of community and legacy of timeless dressing at historically Black colleges and universities,” Lauren said in a statement. “It’s so much more than a portrayal of a collegiate design sensibility. It’s about sharing a more complete and authentic portrait of American style and of the American dream—ensuring stories of Black life and experiences are embedded in the inspiration and aspiration of our brand.”

In 2020, Ralph Lauren made commitments to take action on racial equality and reexamine how it portrays the “American dream.” The Ralph Lauren Corporate Foundation pledged $2 million to support scholarships for students at Morehouse, Spelman and 10 other HBCUs through the United Negro College Fund in December 2021. Morehouse was founded first in 1867 as a liberal arts college dedicated to educating Black men. Spelman was later established in 1881 with a similar dedication to Black women.

Layering of Morehouse blazers and knits from the capsule.  Ralph Lauren

To coincide with the capsule, the company has also created a short film called “A Portrait of the American Dream” that will premiere on March 28 across Ralph Lauren’s social channels. A commemorative yearbook detailing the founding and historical significance of HBCUs through the lens of the two schools will also accompany the full collection when it launches on March 29. The drop will be available on the label’s Polo app, both college campus’s bookstores and the Ralph Lauren website.