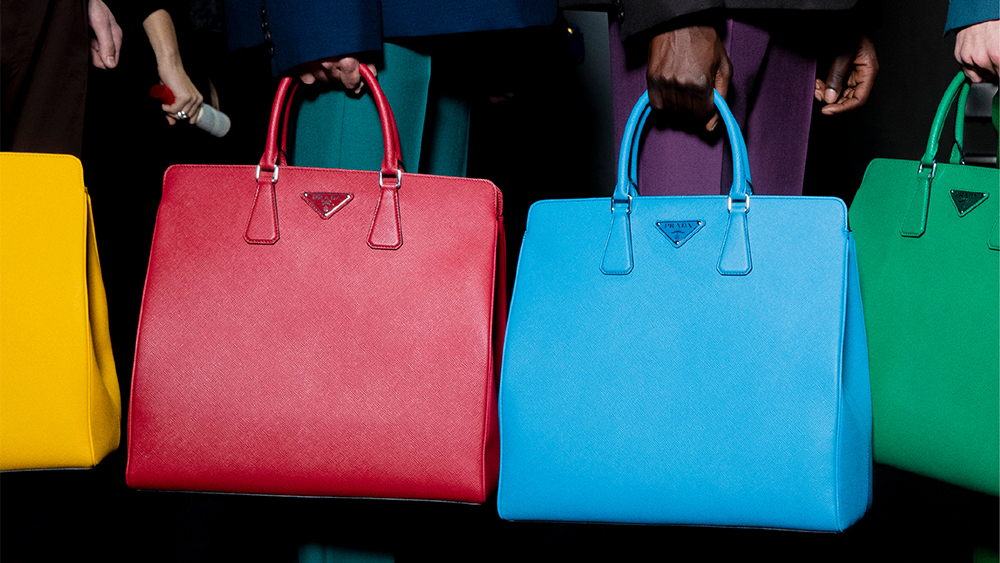 Well before Takashi Murakami hooked up with Louis Vuitton or Yeezy tapped Vanessa Beecroft, Miuccia Prada established herself as fashion’s artsiest auteur. The Milanese designer’s reverence for the arts extends beyond the catwalk—just look at Fondazione Prada, the contemporary art institution she established in 1995. So, it’s fitting that the brand is making its debut at one of the foremost temples of fine art, by way of a sale at Sotheby’s. The unprecedented auction will offer one-of-a-kind clothing, accessories, art and objects with all of the proceeds being donated to UNESCO.

The online-only sale begins October 2nd and runs through October 15th. Think of it as the ultimate high-minded trunk show (or as the brand has dubbed it, “Runway to Rostrum”). The 72 lots have been culled from Prada’s Fall/Winter 2020 men’s and womenswear shows—Miuccia’s last as the brand’s sole creative director—including items from over 40 looks that walked the runway, backstage photographs of models like Gigi Hadid and Kaia Gerber, design objects from the show sets, vinyl of the show soundtrack by Frédéric Sanchez and ephemera like invites and seating cards.

Highlights include two painted wood sculptures by starchitect Rem Koolhaas, an array of the sleek wool topcoats that were a standout of the fall menswear collections and a beaded cotton poplin prototype dress that didn’t make it to the catwalk. It is a sale unlike anything a fashion house or auction house has ever mounted before—taking in-season designs that would typically be cataloged in a brand’s archive, or gifted to VIPs, and making them available to the highest bidder. Particularly as these were Miuccia’s final work before beginning a new chapter with Raf Simons by her side, the pieces on offer carry significant cachet. And given the recent string of high-profile sneaker sales at both Sotheby’s and Christie’s, this auction feels like confirmation of fashion’s status as cult collectible.

The question of whether fashion is art has been debated in fashion circles for almost a century. Elsa Schiaparelli deemed that clothing design wasn’t “a profession, but an art.” Karl Lagerfeld was adamant that “Art is art. Fashion is fashion.” Miuccia herself has expressed similar sentiments. But Claudia Dwek, Sotheby’s chairman of contemporary art, Europe, begs to differ: “I have no doubt—what is fashion if not wearable art?”

Dwek, who helped spearhead the sale, notes that Miuccia’s “creative vision pulls on many artistic, intellectual and political threads,” making her particularly well-suited to hang beside Sotheby’s other blue chip wares. “She studied her PhD in political science, worked as a mime artist at the Teatro Piccolo and acted as a central figure for the Unione Donne Italiane [Italian Women’s Union]. Her interests and experiences undoubtedly appeal to kindred polymaths who collect across categories.”

Prada’s bourgeois-intellectual look has long had a dedicated following of galleristi—many of whom acquire full runway looks, from faux fur trapper hat down to platform brogue, with the fervor of the most dedicated art collectors. It’s not such a stretch to imagine they’ll embrace one-stop-shopping at Sotheby’s, where, in the coming weeks, one can pick up a boxy camel jacket along with a Tom Wesselmann painting and a Patek Philippe split-seconds chronograph. Especially now that traditional brick-and-mortar stores are in the throes of an identity crisis, could this be the future of luxury retail? Miuccia always was a trendsetter…

Intriguing as that idea is, this sale wasn’t conceived as a clever solution to the pandemic’s roadblocks. Rather, it was created to help ease some of the hardships Covid-19 has spurred. All of the profits from the sale will be donated to UNESCO’s Covid-19 Global Education Coalition, which is working to ensure schooling for students around the world. According to UNESCO’s research, school closures during the pandemic interrupted the education of over 1.5 billion youths—90 percent of students globally—and disproportionately affected girls, who had more difficult access to schooling in many parts of the world even before coronavirus upended the educational system.

While in America, the topic of schooling is dominated by debates on the merits of Zoom classrooms and air filtration methods, the situation is much graver in less affluent countries. The United Nations estimates that 24 million children will drop out of school as a result of the pandemic, millions of whom will be forced into child labor as a means of survival. Considering these facts, the Prada sale at Sotheby’s is a rather brilliant fundraiser for an urgent crisis. It taps into the recent surge in online auctions—which have achieved record sums in recent months for categories ranging from paintings to spirits to loose gemstones—and the appetite for fashion with a story to bring attention to one of the many issues the world is facing right now.

Fresh on the heels of her bracingly chic Spring/Summer 2021 presentation—the first with Simons as co-creative director and widely considered the most anticipated show of the season—Miuccia Prada seems to be at the top of her game despite the obvious challenges. If you ask us (and a few professional forecasters), it looks like the value of Prada is poised for growth. In other words: these lots are a smart investment in every sense.