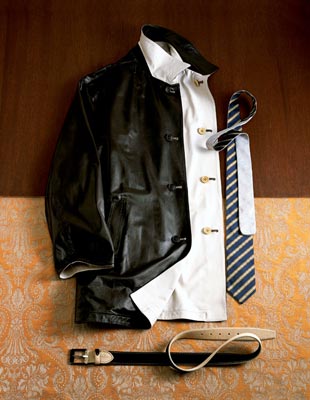 Many credit Scottish coat makers with inventing the concept of reversible clothing in the early 1900s. In an attempt to prevent their heavy wool Harris Tweeds from soaking up rain (and with it, excess weight), they added a processed cotton lining that made the garment impervious to water when turned inside out during a downpour. Since that time, designers have become increasingly fascinated with reversible garments and have even put a new spin on the concept with convertible items that change character with a simple maneuver. Today, reversible and convertible fashions are about versatility, and clothing makers are applying the concepts to everything from outerwear and knitwear to accessories such as hats, belts, neckwear, and even shoes.

Undoubtedly, the most ingenious application of reversibility for spring 2004 comes from Italian shoemaker Silvano Lattanzi, who devised a pair of reversible moccasin-style loafers. By using supersoft and pliable crocodile skins paired with a thin flexible sole, his innovative design allows you to reach inside the shoe and simply turn it inside out to reveal a different and equally attractive skin. A removable leather sock slides inside to prevent the outer sole, which was previously pounding the pavement, from touching your own. While the price of $6,000 is astonishing, one could argue that you actually get two pairs of shoes in one.

In fact, value—by virtue of versatility—is the driving force behind the prevalence of reversible items as well as zip-off sleeves on jackets and hoods that turn into travel pillows. Menswear brands such as Kiton, Herno, Robert Talbott, and Ermenegildo Zegna never had players in mind when they adapted the simple cotton golf jacket. Their new combinations of water-resistant suede that reverse to cashmere, and solid-colored cottons that reverse to stripes or plaids, give these coats life both on and off the fairway. Many are also offering featherweight calf and lamb suede jackets that reverse to cotton or another color of suede. In knitwear, Brioni and Avon Celli employed double-mercerized and Sea Island cottons, respectively, to fashion reversible zippered cardigans and vests that allow for a change of color or pattern without adding bulk. And Ermenegildo Zegna hopes to extend the longevity of its accessories with a collection of elegant, reversible suede belts, as well as Twin neckwear that changes from silk stripes to mini pin dots or foulards merely by being turned around.

Putting a modern spin on the reversible concept, other manufacturers have developed convertible items that can be easily adapted for different uses. Sportswear maker Canali, for example, has created a dual-purpose pinwale corduroy shirt with a convertible dress-to-camp shirt collar that goes from boardroom to boardwalk when you simply unfasten the upper button. Belvest has done the same for its hybrid sport coat/outerwear jacket, which has six oversize pockets and tabs on the sleeves and under the collar, allowing it to imitate a notched-lapel blazer after some simple adjustments.

Versatility can also be enhanced by combining the characteristics of two pieces into one that straddles the line. Borrelli used its fine cotton shirt fabrics to create a hybrid shirt jacket with striped shirt cloth under the collar and lining the seams. Though it is styled like a jacket, the lightweight piece can also be worn as a shirt. Similarly, Ferragamo designed sport coats with banded collars à la Nehru, so they can be worn as blazers over dress shirts or simply layered over T-shirts.

“Next spring, it’s all about convenience,” explains Italian clothing maker Gianluca Isaia, whose entire collection of suits and sportswear incorporates multipurpose details. For Isaia, the concept is exemplified by a revolutionary Storm System–treated, water-resistant linen sport coat that, with a few tugs on some pieces of hidden Velcro, becomes a calf-length trench. The jacket also has a detachable hood that folds into a travel pillow. “Lots of companies are experimenting with suits for traveling, but no one has really addressed the issue of outerwear,” explains Isaia, who created several coats in one to lighten the traveler’s load. “We are all more transient now,” he says, “so everything we buy has to serve several functions.”