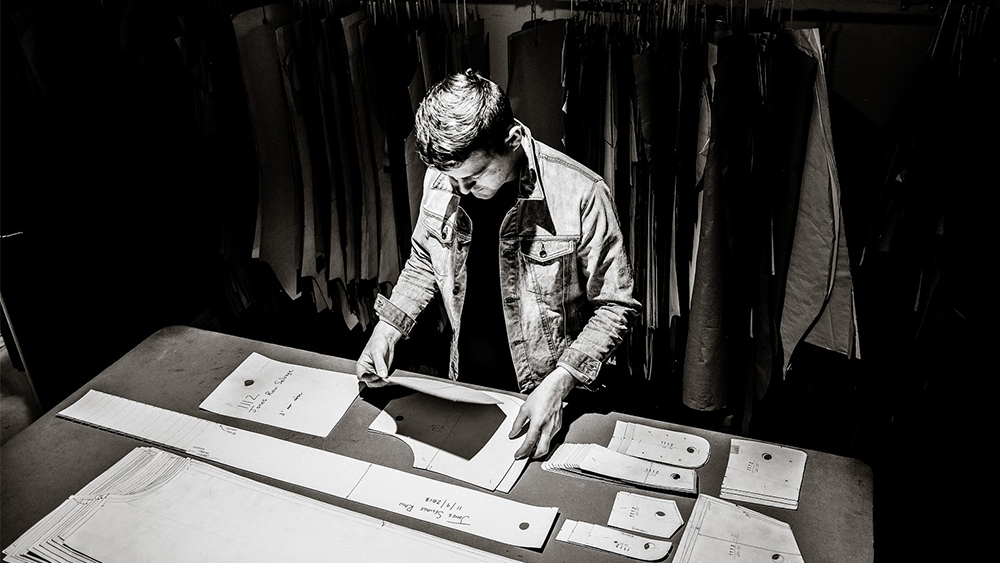 The word “omakase” typically suggests fatty tuna, not selvedge denim, but that might change thanks to Raleigh Denim Workshop. Priced at $5,000, the brand’s Omakase custom service connects patrons directly with company co-founder Victor Lytvinenko, who draws on the business’s substantial archive of rare fabrics to create a one-of-a-kind garment.

There’s a reason that Lytvinenko, who worked as a chef at Nobu’s Tribeca location before co-founding Raleigh Denim Workshop with his wife Sarah Yarborough in 2007, landed on the Japanese word translating to “I’ll leave it to you.” Rather than asking participants to dictate the details of their ideal garment via an online form, Lytvinenko prefers to engage them in a one-on-one conversation by phone or an in-person session at the company’s workshop to better understand their personality and style.

Based on that interaction, Lytvinenko will hand-make a piece with every element tailored to the client’s preferences. If you’re unsatisfied with the outcome, you can ask for a full refund—a money-back guarantee that has yet to be requested. Since the program’s inception, Lytvinenko has serviced clients including rapper J. Cole and Bon Iver frontman Justin Vernon and created everything from patchwork selvedge jeans to a green chore coat inspired by a client’s vintage Porsche.

At the invitation of Raleigh Denim Workshop, I recently had the opportunity to experience Omakase myself. After flying into Raleigh, Lytvinenko picked me up at the airport and piloted us to the brand’s “curatory”—a hybrid space in the city’s Warehouse District that acts as a retail shop in front and a fully functioning jean factory in the back.

The retail portion of the brand’s headquarters.  Raleigh Denim Workshop

Over lunch nearby, I told Lytvinenko that I’d long been searching for a high-rise, wide-legged jean that might complement my fall/winter uniform of oxford cloth button-downs and tweed jackets. Fortuitously, Raleigh Denim Workshop had just introduced its roomy Rowan cut, marked by a generous 14-inch rise, which fit me well.

Knowing that we’d be working off that model, we began to explore the fabric bolts stashed about the factory. Out came deadstock selvedge from North Carolina’s White Oak mill (Lytvinenko purchased the shuttered mill’s last 20,000 yards), Japanese reproductions of that particular selvedge, loosely woven Italian basket-weaves, even a stretchy, porous denim made from 70 percent cotton and 30 percent banana stalk. After witnessing more shades of indigo than I thought were possible, we settled on a selvedge made by the UK’s Hewitt Denim Mills in a dark hue recalling the nighttime ocean. Originally presented to Lytvinenko as a gift and yet unused, the bolt contained enough fabric to make just three pairs of jeans.

Using one of the hand-drawn patterns he’d developed, Lytvinenko cut the panels of my jeans and got busy putting them together on a sewing machine. A few experiments were tried: At Lytvinenko’s suggestion, the jeans were initially sewn with a single stitch, until I decided that I preferred the more typical double stitch and the correction was made in real-time. The garment’s most unique feature is a subtle one: The front pockets are slanted at a 90-degree angle, rather than the curved pocket shape found on most jeans. As this was a design Lytvinenko had never attempted, he first sewed a “dummy pocket” on top of a piece of less-precious denim so that I could be sure the shape would comfortably accommodate my hand (it was a success).

After close to four hours of watching those bits of fabric evolve into a three-dimensional object, the jeans were complete save for their extra-generous, unfinished hems. Agreeing that it was time to get dinner, I rolled them into a massive cuff and joined Lytvinenko at a nearby restaurant for Nashville hot fish collars and barbecue beef tartare. We returned to the workshop afterward to finish the hems, and jointly sign the inside of the jeans below a tag indicating the garment’s “1/1” status.

They are, admittedly, one of the tamer pieces to come out of the Omakase experience; past commissions have required Lytvinenko to bleach denim in the parking lot or even burn the fabric. But my understated design reflects my buttoned-up personality—which is the entire point of this service.

By the time we’d finished, it was close to midnight. But Lytvinenko was still jumpy with creative energy and imagining what could be done with a future commission. “I think when you get two people in a room and you create some time and some space, some really special things come out,” he says. “It’s a method of creation that is so pure and honest, and I believe in it more than I believe in anything in the world. I wouldn’t have made this jean if you had never visited.”

And unlike the edible version of omakase, this creation was something I could bring back home.