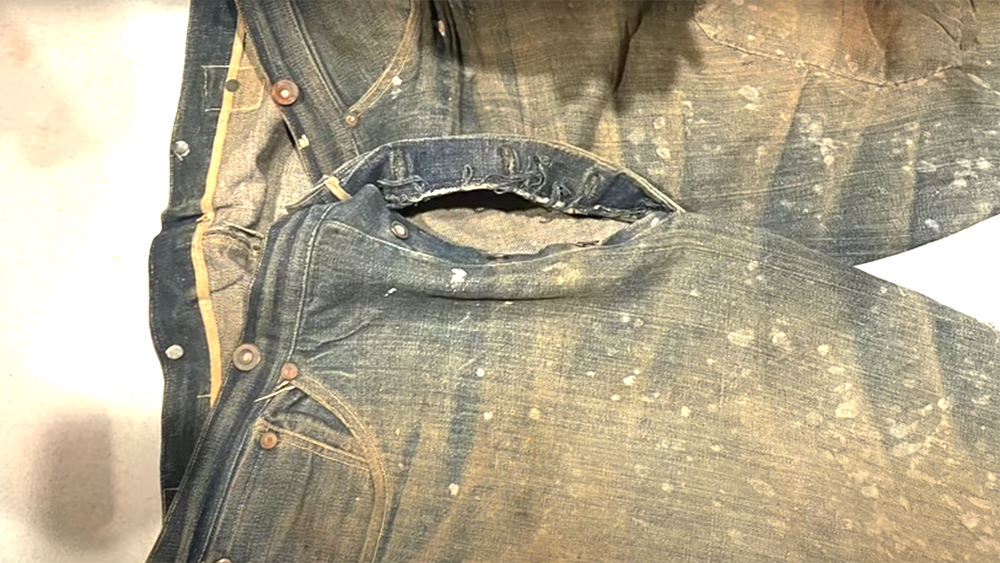 Turns out gold isn’t the only valuable thing you can find in a mine.

A pair of vintage Levi’s discovered in an abandoned mine shaft in the American West recently sold for $87,400 at an auction in New Mexico. The jeans, which date back to the 1880s, were unearthed by self-described “denim archaeologist” Michael Harris several years ago before they were snapped up by a pair of vintage-clothing dealers at the Durango Vintage Festivus on October 1.

“I’m still kind of bewildered, just surprised in myself for even purchasing them,” Kyle Haupert, who bought the jeans with Zip Stevenson, told The Wall Street Journal.

As Levi’s of this age rarely come up at auction, they are especially sought-after among collectors. This particular pair, which are apparently still in a wearable condition, features splatters of wax from the candles miners used to light the narrow tunnels. Other notable details that are specific to jeans of this era include a cloth patch along the beltline, a buckleback adjuster along the seat, suspender buttons and a single back pocket.

In addition, there is a label on the inside of the jeans that reads: “The only kind made by white labor.” Levi’s told the WSJ the company introduced the slogan after the Chinese Exclusion Act of 1882, which barred Chinese workers from entering the US at a time of rampant discrimination. In fact, Levi’s even had an anti-Chinese labor policy in place during this time.

“It’s wild to see that,” Haupert added. “That’s how old these jeans are.”

The slogan and policy were both scrapped in the 1890s, according to a Levi’s spokesperson, who added that the brand is “wholly committed to using our platform and our voice to advocate for real equality and to fight against racism in all its forms.” The Chinese Exclusion Act was repealed in 1943 and later condemned by Congress in 2011-2012.

The auction of the jeans was a clear highlight of the four-day Durango Vintage Festivus. Indeed, one video of the bidding has been viewed more than 7,000 times as of writing. Collectors probably won’t find the final hammer price that surprising, though. Levi’s from the 19th century routinely attract thousands at auction. In 2018, a pair from 1893 sold for nearly $100,000 through a private sale to a buyer in Asia. Just imagine what your Big Es could be worth in a century.