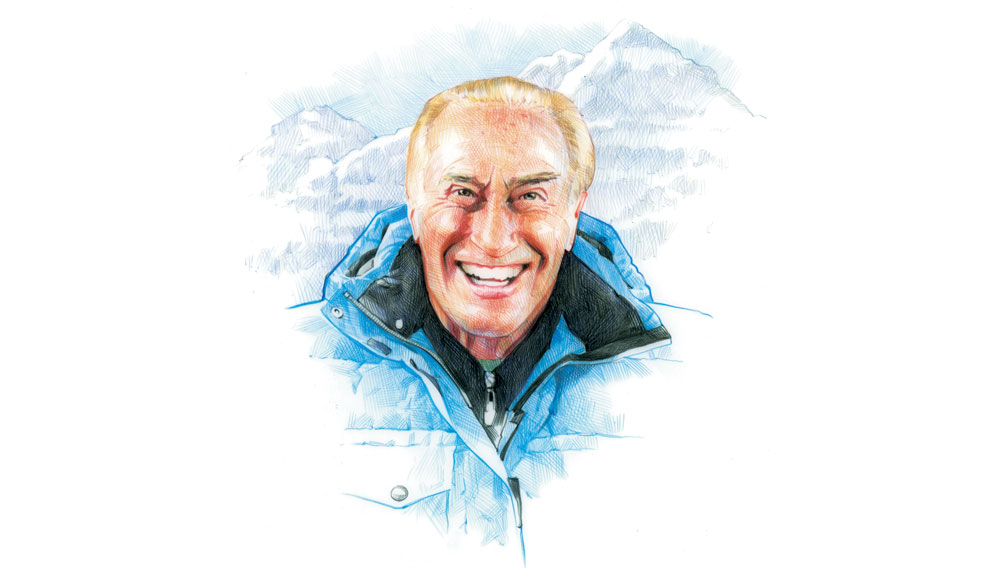 A conversation with the skiwear pioneer and ageless outdoorsman.

Klaus Obermeyer’s need for speed developed at the tender age of 4, when the native of Oberstaufen, Germany, nailed a pair of wooden boards to his boots and descended his first snowy slope. Nearly 90 years later, the founder of the Aspen, Colo.–based skiwear company Sport Obermeyer is widely regarded as the grandfather of modern skiing. The former instructor—whose skiwear innovations include the first down-filled ski parka—remains a fixture on the slopes, as well as a swimmer, tennis player, windsurfer, farmer, and even yodeler. In advance of his 95th birthday in December, Obermeyer shared with Robb Report his secrets to staying forever young.

What were some of your most memorable moments as a ski instructor?

I taught Gary Cooper, Ingrid Bergman, and Lex Barker, who played Tarzan in the movies in the 1950s. I was 27 years old and one of the first instructors in Aspen. At the time, it was so cold that people wore long wool coats up the ski lifts, but then they couldn’t ski down wearing them. I cut up the down quilt that my mother made for me to bring to North America and made my first warm jacket. It looked like hell, but it made skiing a little more comfortable. I sold it to Gary Cooper for $250.

What other sports have you mastered over the years?

I swim and play tennis, and I enjoy windsurfing in Maui and on Ruedi Reservoir near Aspen. I’m now learning how to kite surf. It is simpler than windsurfing and a lot faster. And I used to rock climb a lot but stopped when I turned 90.

What is your perfect day off?

I don’t take days off. I love what I do, so I don’t have to take a day off to have fun. I ski every day, and I’m lucky that, in my line of work, I can call it product testing.

Tell us about your farm.

I have a 100-acre ranch about 20 minutes down valley from Aspen where I do everything organically. I keep horses and cows, and in my garden I grow peas, beans, and tomatoes. I especially love my orchard. The apple trees were brought over as seedlings from Valle d’Aosta in the Italian Alps more than 180 years ago. Those old farmers had the right idea. The old apple varieties ripen in sequence so month after month another tree has ripe apples from August until the end of November. I have a cider press and make some quite good cider.

You also built a hydroelectric plant.

I designed and supervised the construction of a 5-

megawatt hydroelectric plant that supplies clean and renewable energy to more than 7,000 homes in southern Colorado. I design sportswear for skiing, but I received an engineering degree in post-war Germany. Maybe the dam is less of a surprise when you know this.

What is your favorite toy?

I like my custom bike. It is a road bike made by a friend of mine in northern Italy in 1959, which was the year that Hawaii became a state. He painted an American flag on the frame. The frame is made of steel, and it is very heavy but it goes really well downhill. I take it mountain biking on the Rio Grande Trail, and it never breaks down.

Your 95th birthday is coming up. What is your secret to longevity?

I think it is attitude. Keeping life in balance, working out every day—mentally as well as physically—and enjoying nature. On my 82nd birthday, I skied down Aspen Mountain at 82 miles per hour. Actually, I was clocked at 83. That was my fastest. I’m not going for 95 on my 95th, but I do always celebrate birthdays with wiener rostbraten and homemade apple strudel with whipped cream.