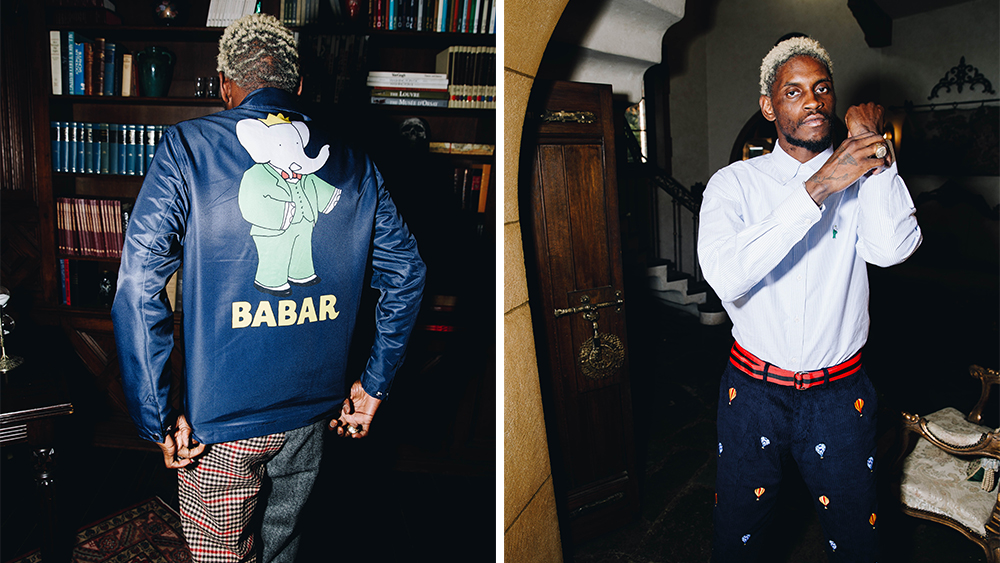 How well do you remember the story of Babar the Elephant? In many ways, the French children’s book, created in 1931 by Jean de Brunhoff, is the story of a renaissance man. Despite a tragic beginning (for those who don’t recall, a hunter kills Babar’s mother), Babar escapes to the big city where he becomes a man, er, elephant of sophistication, donning a natty green suit and learning about the ways of the world before returning to his home and becoming their king. Unlikely as it may seem, the regal elephant has serious style chops.

This is the central hook of Rowing Blazers’ newest collaboration. Not content to rest on their laurels after a smashing royal partnership that the brand literally cannot keep in stock, the NYC-based clothier is ending 2020 on a strong note with a collection that celebrates Babar’s nostalgic charm. Prime for holiday gifting, this collection is the first of an ongoing partnership between Rowing Blazers and Canadian animation studio Nelvana that takes the preppy threads the brand is known for and remixes them with de Brunhoff’s classic iconography, including Babar, his car, even his hot air balloon.

“I wanted to do this collaboration for a long time,” Jack Carlson, founder and designer of Rowing Blazers, tells us. “Babar is all over our mood board. He’s a big inspiration for me, for the brand. Babar is a super stylish guy in terms of his clothes and in terms of his overall lifestyle—very fun and whimsical. I just love the whole vibe.”

That playful take on upper-crust life jibes with Rowing Blazers’ irreverence rather well. Recounting the elephant’s refined sensibility, Carlson says: “Babar has done it all. He’s skied in the French Alps. When Babar visits America, [he] does it right. He has dinner at the White House. He gets an honorary degree from Harvard. He’s in the Presidential suite at the Waldorf having brunch. He attends a party in Los Angeles that looks like something Slim Aarons would photograph. He’s like if James Bond had a family. Babar doesn’t mess around.”

The collection doesn’t mess around either. Rowing Blazer staples like corduroy trousers, caps and ruby shirts are cheekily emblazoned with Babar’s likeness. The most eye-catching (and collectible) get is an actual reproduction of Babar’s famed green suit. Crafted from comfortable cotton gabardine, it’s a faithful page-to-real-life recreation—just cut to flatter homo sapiens. In a characteristically thoughtful touch, the interior lining features Babar getting fitted for his version of the suit.

The other standout is a cashmere-wool blend sweater, intarsia-knit with the elephant king, that might seem familiar. “I’m not ashamed to say that it’s a little bit inspired by a Polo Bear sweater,” Carlson said, referring to Ralph Lauren’s cuddly mascot. “Doing that sweater was a big challenge, actually. Getting it all rendered really well—because it’s a hand-worked process, it’s not like it’s a screen print.” Rather than a conventional print, the design is knit into the sweater—which Carlson says took some twenty iterations to perfect. The tenacity paid off, resulting in a piece that’s bound to move as quickly as those Diana sweaters did.

Sure, Babar may not top any lists of fashion icons. But a deeper look proves how style is central to the character’s story. Translating a childhood cartoon into something that speaks to grown men is no easy feat. Still, Rowing Blazers has managed to do it in a way that feels effortless—while also reminding us that fashion inspiration can come from the most unexpected places.