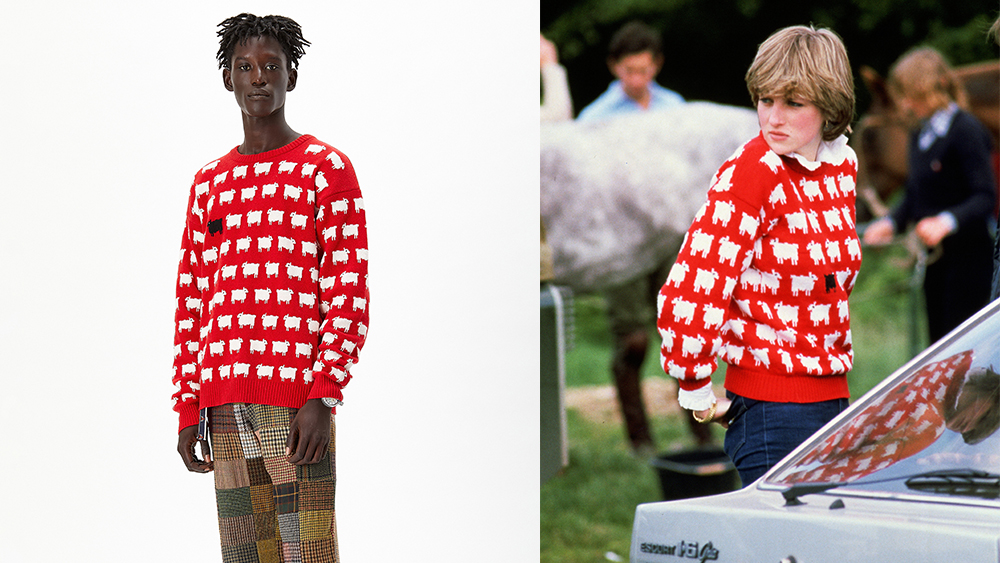 Pretty much from the moment she entered the public eye, Princess Diana’s effortless charm endeared her to millions around the globe. During her lifetime, the people’s princess was celebrated for her Versace couture and high-wattage glamour but, in recent years, her quirkier off-duty attire has been rediscovered by a younger generation, making her a subject of fashion fascination anew. There are scores of tribute Instagram accounts, including one dedicated to her best post-divorce “revenge looks”, and last year, one of Lady Di’s favorite workout sweatshirts fetched a stunning $53,532 at auction. This facet of the royal’s fashion lexicon has cemented her status as a style icon for an unlikely demographic: men.

What can Di teach guys? Look no further than Rowing Blazers’ latest collection, which took the princess as a leading inspiration. More than a mere ode to Diana’s knack for layering, the collection includes two faithful recreations of the princess’ most infamous sweaters, produced in collaboration with the original designers—the first authorized reproductions ever. They’re just a couple of the pieces that prove the Princess of Wales had serious sartorial swagger.

“I think Diana is a menswear icon,” says Jack Carlson, founder and designer of Rowing Blazers. “She was, like, the pioneer of mixing high and low, and really very early in blurring the lines between menswear and womenswear. The way she dressed when living her everyday life is almost proto streetwear—and all the while she’s the queen of Sloane Ranger style,” Carlson says, referring to the Anglo equivalent of the preppy collegiate look that is Rowing Blazers’ modus operandi.

Carlson specifically drew on the aspects of Princess Di’s style that have often been overlooked until recently, namely “the way she could take a Philadelphia Eagles Starter jacket or a Harvard sweatshirt and wear it with a blazer that just as easily could’ve been worn by Prince Charles.” That talent for combining patrician threads with everyman sportswear provides a compelling template for styling contemporary menswear, which increasingly toes the line between casual and tailored. In Carlson’s summation: “A lot of what she did has more to do with how men dress today than it did with how women were dressing in her time.”

Given her high profile, Diana’s outfits for every trip to Sainsbury’s or rollerblading in Regent’s Park were well-documented by the paparazzi. One of the most memorable features of these low-key looks was the princess’s collection of statement sweaters. An especially buzzed-about design was a red crewneck emblazoned with rows of white sheep and one single black sheep—a not-so-subtle commentary on Diana’s standing in the royal family? Surely, the metaphor wasn’t lost on the image savvy princess.

As such, the sweater made the tabloid rounds. And in the decades since, it’s been copied extensively—most notably in a Lanvin sweater-vest sported by Harry Styles. None of those iterations gave credit to the original designers, Sally Muir and Joanna Osborne, who launched their brand, Warm & Wonderful, in London in 1979 and swaddled the likes of David Bowie and Andy Warhol. Carlson, whose mother still owns her original Warm & Wonderful sheep sweater, managed to track Muir and Osborne down and propose reviving their most famous design. And now, for the first time since 1994, an authentic version is available again (for considerably less than the $900 the originals go for on eBay).

Another of Diana’s most controversial knits was a pale pink number declaring “I’m a luxury…” across its front, concluding with “few can afford” along the backside. As one can imagine, the tongue-in-cheek, all-caps statement ruffled a few tea cozies among the Debrett’s set. But as Gyles Brandreth, a noted author, broadcaster, former member of parliament and one of the “luxury” sweater’s designers, tells us: “Those that don’t get the joke don’t matter.”

Coincidentally, both sweaters originated around the same time that preppy style became codified across the pond. In several designs from this same collection, Rowing Blazers also features the legendary “Are You A Preppy?” poster that took the style beyond Ivy greens and spawned a worldwide phenomenon. Carlson reveres it as “a very important work,” explaining that the poster was, in its way, the original meme.

“It was so ubiquitous. The poster came out in the spring ’79 semester of college and by September, that poster is on the cover of Men’s Club magazine in Japan.” It provided the “visual vernacular” for The Preppy Handbook, the gospel for OCBDs and Top-Siders, and defined a look that is enjoying a renaissance among menswear enthusiasts today.

Other hallmarks from this era round out a collection that, as a whole, is an irreverent celebration of Aristo eccentricities: fleece jackets in the style of traditional polo jockey silks, a selection of pieces featuring the famed Unicorn in Captivity tapestry from the medieval collection at The Cloisters (a nod to heraldic iconography), patchwork tweeds and vivid rugby stripes. It’s a very Diana mix, to be sure, with plenty worth copping. But those unmissable sweaters can’t help but stand out as the must-buys of the range. While inherently eye-catching, the designs also feel surprisingly well-suited to the current moment.

Brandreth has long been a proponent of the novelty knit, beginning in the 1970s. As a frequent presenter on British TV, Brandreth began donning brightly colored sweaters with playful graphics—a Scrabble board, a teddy bear, Shakespeare’s visage—for added stage presence. Soon enough, the sweaters caught on with viewers and a style imprimatur was born. In the early ’80s, he happened upon a sweater baring two cockatoos and was smitten (even more so after learning the Princess of Wales had just purchased one herself). He tracked down its maker, George Hostler, and they joined forces to produce hundreds of cheeky sweaters for Brandreth’s TV appearances, including the famous “luxury” design.

Unlike Warm & Wonderful, Gyles & George was never a widely distributed brand. It was mainly a passion project made available to the duo’s notable friends, like Diana, Elton John, Absolutely Fabulous’s Joanna Lumley and Downton Abbey’s Hugh Bonneville. That rarity makes Gyles & George’s revival all the more newsworthy for certain scholars of early 90s Brit style. Of the princess, Brandreth recalls: “She used to say ‘These are jumpers that make me smile,’ and that’s the idea. I think we need two things now: to smile, of course, and to be allowed to pamper ourselves.”

After retiring the sweaters when he joined Parliament, Brandreth brought them back during lockdown. A fan reached out on Twitter with a plea: “Desperate times call for desperate measures. We need your jumpers.” Ever the civil servant, he responded by donning a sweater and reciting a poem on Twitter every day for 150 days straight. Indeed, the lighthearted sweaters—a riot of childlike colors and charmingly naif imagery—are a potent antidote to the doldrums of 2020.

Desperate times call for desperate measures. Yes, the jumpers are back! I’ve been to the basement, picked through the mothballs & in the coming days I’ll be sharing some of my novelty knits from the 1980s along with some of my favourite poems: some may be serious but not today’s pic.twitter.com/hFplBEaIiE

Even for those self-serious men who deem jokey fashion an affront to their cultivated poise, Brandreth (who, let’s not forget, has served in the most hallowed halls of British government and shared air with her majesty, the queen) suggests you reconsider. “Anyone who can sport the preppy look successfully can certainly, comfortably wear one of these jumpers.” But, moreover, any man can stand to benefit from the garment’s effervescence.

“Every survey ever done of ‘What Do Women Look For In A Man?’, top of the list is always a sense of humor. With these jumpers, even if you are an inarticulate geek, people will warm to you.” Referencing Oscar Wilde, he adds that the sweaters “have the effect of that old picture in the attic: wear one and you stay young.” Now that Princess Di has gotten her due, it may be Brandreth’s turn to be reevaluated as a modern menswear icon.