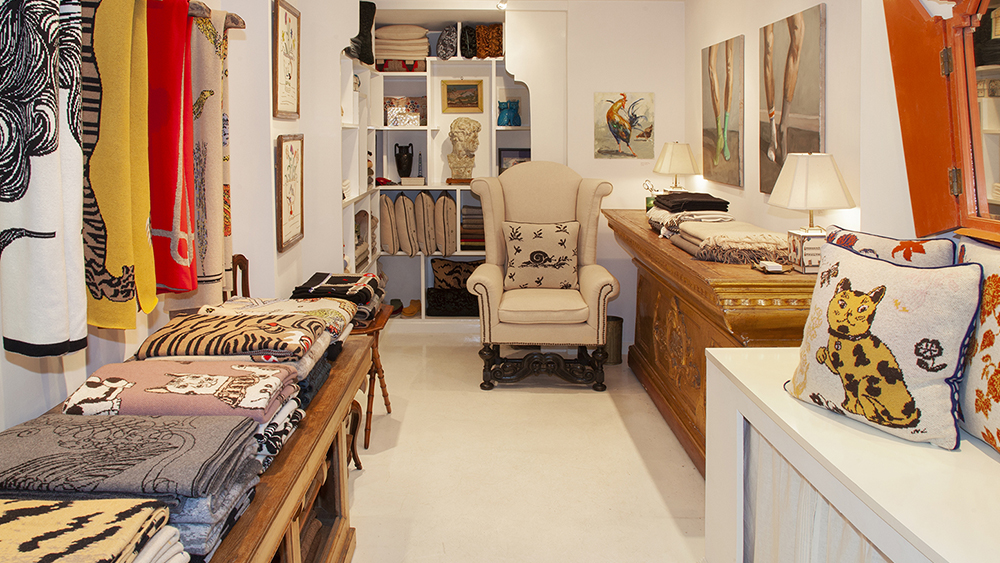 The term “curated” has become so overused by store owners and designers that it’s now less an adjective than it is self-congratulatory PR jargon. Perhaps that’s why, when a retail business truly is curated by a refined, singular eye, it makes a big impression. Such is the case with Saved New York, a small clothing and housewares company situated in Manhattan’s Gramercy Park neighborhood. An Ali Baba’s cave of decorative delights, the store is best known for its cashmere but, like all great troves, it also contains plenty of the unexpected.

Founded by artist Sean McNanney, who studied textile design at the Center for Creative Studies in Detroit and cut his style teeth building sets for Ralph Lauren, the brand debuted in 2015. In addition to the Gramercy shop, Saved also has a store in Williamsburg primarily stocked with furniture. If the Manhattan store is an edited cabinet of curiosities, the Brooklyn store is the fascinating warehouse they pass through before making the cut. Although the stock runs the gamut from whimsical collages to rare antiques, Saved New York has become best known for its handmade cashmere sweaters, scarves, pillows and throws, all of which are designed either by McNanney himself or in collaboration with various well-regarded illustrators, artists and tastemakers.

A cashmere polo-neck pullover ($775) and a throw blanket created in collaboration with Lukas the Illustrator (from $1,475).  Saved NY

While some of the designs are subdued, many of the sweaters are wonderfully dramatic (think of something Oscar Wilde might wear on Casual Friday). Although McNanney reports that most men are partial to a tiger-striped crewneck sweater, there are decadently chunky shawl collar cardigans, polos and other classic silhouettes in a range of neutrals. For the more daring, there’s an almost floor-length cardigan in a slithering snake print, a sweater vest jacquard-woven with assorted fauna silhouettes and a graphic rooster sweater that puts one in mind of Pennsylvania Dutch country—a piece that reflects of McNanney’s interest in American folk art.

Although his inspirations may change, McNanney’s commitment to sustainability and fair-trade practices never waivers. These principles have guided him from the start, when McNanney sought a cashmere supplier whose ethos aligned with his. Thankfully, he didn’t have to look far. His father’s second wife just happened to come from a family that is one of Mongolia’s better-known cashmere suppliers, as McNanney explains: “I started working with her family in Mongolia because they raised cashmere goats, camels, yaks and horses. They’ve been doing it a long time and are really established in the world of cashmere.” A modest description—they’ve supplied the likes of Hermès and Loro Piana.

Of the process of culling the cashmere, McNanney says things are still done the old-fashioned way—slowly and with care. “For our blankets, you need the cashmere from probably four or five goats,” he reports. “And to comb one goat, it’s 45 minutes each—that’s just combing! Then you have to clean it, and half of everything you comb is ‘waste.’” In fact, he says, that excess fur is turned into felt. “The felt is what you use to make the inside of a yurt and the carpets on the bottom of a yurt. They really don’t waste anything!”

It has always been true of New York, in particular, that every now and then a design voice comes along that establishes not so much a store but an aesthetic (think John Derian, Roman and Williams or, if you’ve really been here a long time, Wolfman Gold). Looking at McNanney’s point of view as a whole, one can almost feel the day when someone will enter an apartment and say, “Oh, this has a very Saved look!” That is, if they aren’t saying it already.