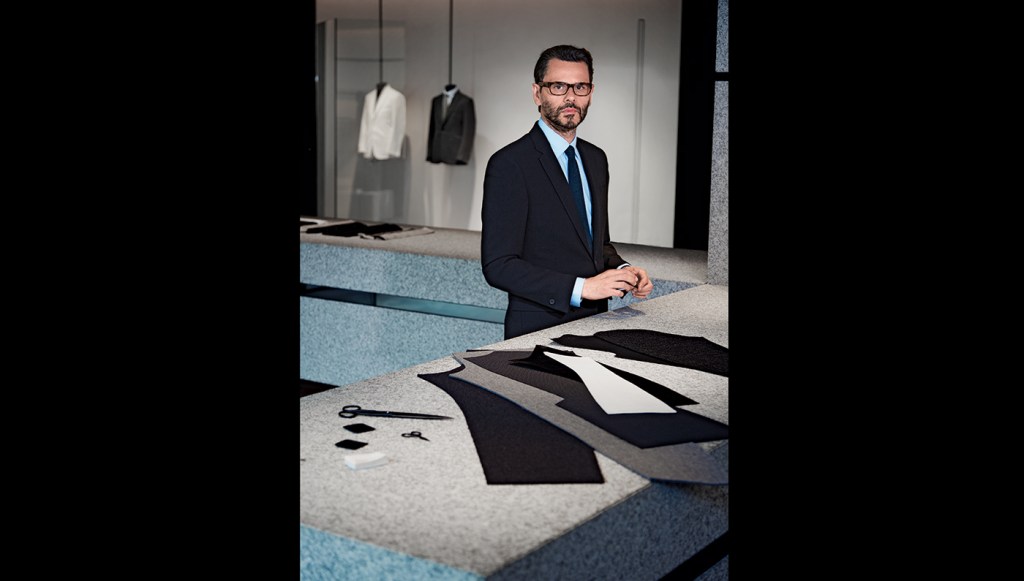 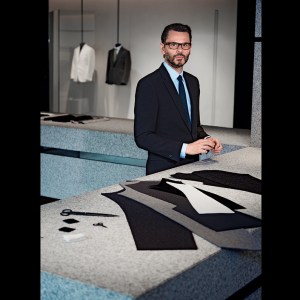 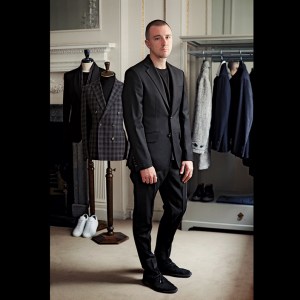 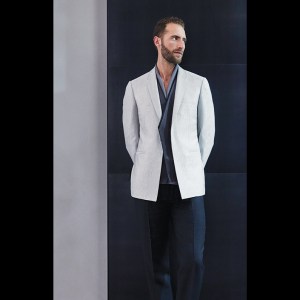 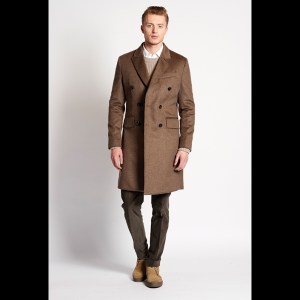 On a bright summer day on London’s distinguished Savile Row, it’s easy to notice the shift in men’s attire. The days of businessmen walking along the famed thoroughfare in structured, strong-shouldered power suits paired with the compulsory dress shirt, necktie, and pocket square are, by and large, a thing of the past. That uniform has evolved, and now it is common to see men wearing relaxed tailored jackets, trousers, and open-collared shirts and exuding the relaxed confidence that comes with comfortable clothes. They are forgoing the traditional suit in favor of unstructured jackets and “broken” suits—ensembles that pair jackets with a different style of trousers. It’s a more modern way of dressing in today’s less formal society.

“Today it is all about choices, and men have a very clear opinion about how they want to look,” says Carlo Brandelli, freelance creative director for Kilgour, which has operated a tailored-clothing business on Savile Row since 1880. In the past, he says, Savile Row tailors dictated what their clients wore, but now well-informed men are shaping their own wardrobes. Although the suit remains at the core of the businessman’s wardrobe, it meets the newest demands of the wearer: softer, unlined, and simply more comfortable.

This evolution is evident in store windows on the Row, as it is known among insiders. On display are more modern suits and sportier clothes, and, for the first time in Savile Row’s history, a woman’s name is above the door of a tailor shop. Kathryn Sargent, formerly of Gieves & Hawkes, launched her own company in 2012 and debuted her own tailoring house on the Row in April. “It’s a sign of the times—a pleasant sign of the times—and it shows that this industry is more diverse,” says Sargent, whose high-profile clients include the United Kingdom’s royal family. All of this points to the tailoring community’s adaptability. Rather than staying stuck in a time warp, it is employing the expert skills that have made the Row the world’s premier destination for bespoke suits and reemerging as a force for contemporary tailored clothing that is not only exceptionally made but also sophisticated and fresh.

“Men want to look sexy in a suit,” says Darren Barrowcliff, the new design director for the Savile Row house Hardy Amies. The Detroit native’s own uniform consists of a streamlined black jacket and trousers with a T-shirt, and his take on modern tailored clothing pairs the unexpected, such as a suit jacket with tailored cargo pants, and evening jackets with knit T-shirts or turtlenecks. “I want to make the concept of the suit a little more playful and modern,” he says.

Barrowcliff and his peers represent the new guard on Savile Row, and they are breathing new life into age-old tailoring houses. It is a careful balancing act: bringing these venerable companies into the modern era while staying true to their remarkable histories. Hardy Amies, for instance, was known throughout London in the late 1940s for his dapper sense of style and lavish entertaining on the Row. The bon vivant, a former military man, established his tailoring house in 1945 at 14 Savile Row, and in the 1950s it became the official dressmaker to Queen Elizabeth II. Today Hardy Amies’s garments are still made by hand in the basement of that Georgian-era structure, which also houses the company’s design studio and bespoke service. A few doors down, at No. 8, his storied style is interpreted in a full-scale ready-to-wear collection that is displayed in the brand’s sleek new store.

At Kilgour, Brandelli has garnered considerable attention for his evolution of the house’s signature suit style. The new aesthetic is more streamlined and refined, but at the core is Kilgour’s familiar silhouette: a one-button, single-breasted jacket slightly nipped at the waist with a neatly constructed shoulder. These suits are often unlined and made in lighter textured and performance fabrics, as opposed to the traditional heavy English fabrics of the past.

Indeed, old-fashioned meets new all along the Row. Next door to modern minimalist shops are traditional houses filled with historic memorabilia, including photos of royals and dignitaries donning formal suits and regal clothing. Below most shops, tailors continue to work in basement spaces as they have for decades. “The craft has not changed in 140 years,” says Brandelli.

At Kilgour, for instance, 14 tailors work downstairs, and a large window gives passersby a glimpse of the artisans at work. By contrast, the company’s new modern store, located upstairs, is sparsely adorned with clothing and features “floating” tables suspended from columns. Hanging on the wall are pattern swatches encased in Lucite along with the names of the notables—David Chipperfield, Daniel Craig, Jacquelyn Kennedy Onassis—who wore them.

Among the other new establishments on the Row is No. 37, where Sargent is preserving the traditions of bespoke tailoring while dispelling any antiquated notion that the trade is for men only. Having spent 15 years at Gieves & Hawkes, where she became the Row’s first-ever female head cutter, she opened her own shop, which she wanted to feel welcoming. “There’s such a mystique around Savile Row; I didn’t want anyone to feel intimidated coming in,” she explains. “I just put myself in their shoes.” Her store has brightly lit interiors and an open layout, and she strategically placed the cutting table in the front window so that the passing public can glimpse her or one of her staff members cutting patterns. She works closely with each client to offer suiting that meets the individual’s needs, whether that means traditional formal or new casual. “The days of your father taking you to his tailor are over,” says Sargent. “Savile Row has evolved and will keep evolving, and I think I’m part of the evolution. I’m very proud of it.”