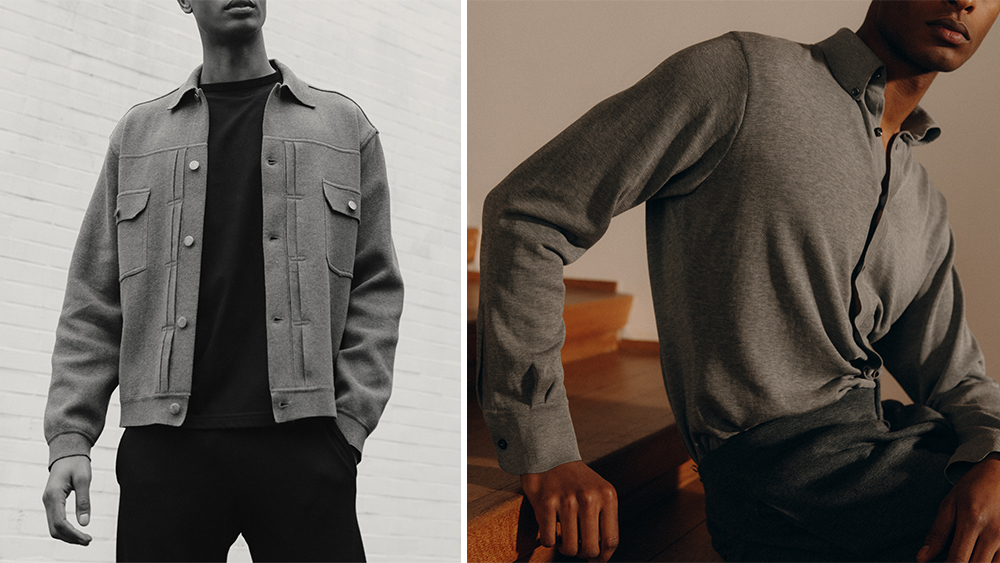 Sometimes the simplest things are the hardest to get right. Which is why, despite the plethora of designer duds out there, it can be a struggle to find a really good basic. Sure, there are plenty of solid T-shirts and crewneck sweaters on the market, but how many are really, reliably exceptional? That search is what led Joe Serino and Lexi Sacchi to launch Serino, a new range of wardrobe staples that are as thoughtfully crafted as any sartorial showstopper.

Serino, the brand’s namesake, is an industry vet who spent sixteen years designing for Nike. After so many years working for a global fashion juggernaut, he felt an urge to pare things back and focus on the building blocks of one’s wardrobe. “The luxury brands do their thing…and then there’s the kind of commodity world,” he tells us. “Most essentials live in a world that’s kind of the lower level.” As he and Sacchi began discussing what would become Serino, they realized that those essentials, however unremarkable, formed the core of their attire: T-shirts, sweaters, streamlined trousers. Serino describes them as pieces “that you can wear every day, with everything, that you don’t really have to think about.”

They honed the collection down to seven indispensable styles for both men and women, one for each day of the week: a long-sleeved sweater, a short-sleeved tee, a button-down shirt, a blazer, a trucker jacket, flat-front trousers and joggers. Sacchi, whose background is in retail, notes that finding, say, a great, simple black pant is a perennial struggle for many shoppers. A designer might make them one season, but then they’re gone the next. And most shop floors are rife with statement pieces but short on sartorial bread and butter. “For women, you can find a cocktail dress, no problem,” she says. But, “the kind of stuff you’re actually going to live in day to day” rarely gets equal billing. So, the question became, how do you up the luxury ante on such basics without any unnecessary bells or whistles?

The answer they landed on was to craft them like the very best sweaters, using silky Pima cotton and a 65-year-old family-owned Italian factory. Everything is flat-knit in a fine gauge and hand-linked, which means that even the blazer and trousers have all the comfort of a T-shirt. And while the founders had originally planned to launch pre-pandemic, the past year-plus proved to only heighten the need for comfortable, versatile garments. The button-down shirt, which follows the form of a classic OCBD but wears like a knit polo, is a prime example: it looks smart while lounging or working at home, can be layered over a tee like a cardigan or easily tone down the formality of traditional tailoring when worn under a suit.

Serino’s fine-gauge button-down ($395) is a cross between a knit polo and an OCBD.  Serino

Given the designs’ relative simplicity, every buttonhole and pocket angle is deeply considered. “It’s easy to be loud and, you know, embellish,” says Sacchi. “We really, really ask ourselves—with every aspect of the brand—is this necessary? Why would you put that there?” On a pragmatic level, the single cotton yarn that features in every piece is machine-washable, easily packable and naturally breathable. And on a stylistic level, stripping away all the excess yields garments that are true wardrobe workhorses.

“We really wanted it to have this effortless quality,” Sacchi explains. “Whereas nowadays, with more luxury fashion, it feels very effortful. We wanted pieces, too, that people could put their own aesthetic on.” Minimalist or traditionalist, uptown or downtown, young or old—these are pieces that can easily weave into any and all wardrobes.

And while Serino is adamant about avoiding novelty for novelty’s sake, the brand is planning to expand its range to suit all seasons. After launching with seven pieces in cotton, this month will see the release of equally essential designs in heavier-weight merino wool. Their aim is to work within this framework—premium fibers, neutral colors, in various weights—to continue riffing on tried-and-true silhouettes, never discontinuing a style and only adding what’s truly needed.

“There’s a lot of product in the world today,” Serino says. “Having worked for one of the biggest brands in the world, Nike, for so many years, I saw a lot of waste and that’s something we wanted to address as well. This idea of making exceptional essentials without a lot of excess became a kind of mantra for us.” It’s a wise approach for manufacturing and, moreover, for dressing with unimpeachable style.