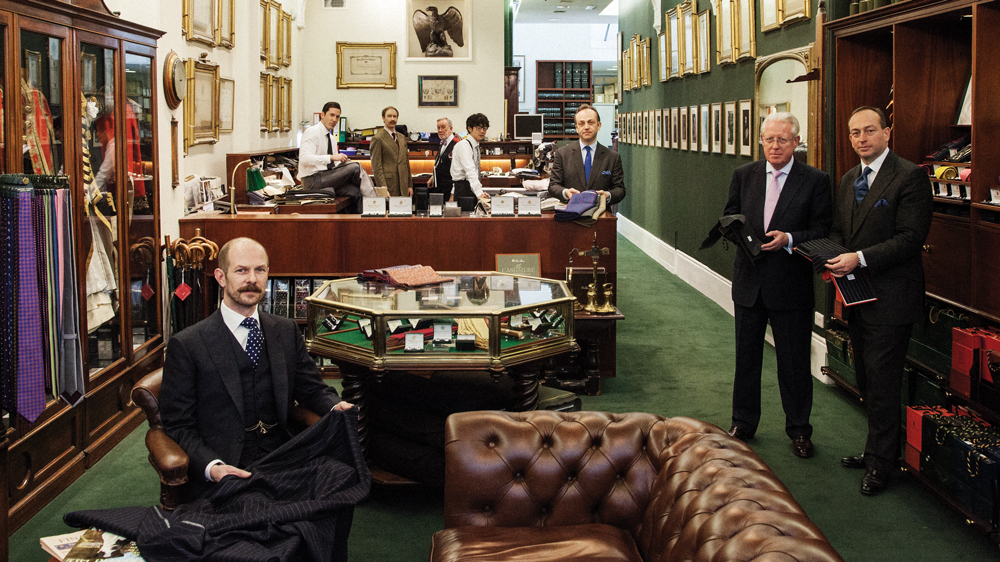 The British royals,young and old, are a discriminating bunch when it comes to everything from clothing and accessories to umbrellas and footwear. But even after these privileged patrons deem a brand worthy of their custom—which, in some cases, can be more valuable than a social-media star’s endorsement—a rigorous approval process is required before a vendor can be awarded the official warrant. Following are some of the House of Windsor’s most favored favorites, some of which have been serving its members for multiple generations.

Since establishing the first tailor shop on Savile Row in 1846, Henry Poole & Co. has clothed an astonishingly regal roster that includes Emperor Napoléon III, Queen Victoria, King Edward VII, Emperor Hirohito, and a lengthy list of tsars and maharajas. The  recipient of some 40 warrants, the firm might hold the record for royal recognition, according to managing director and seventh-generation owner Simon Cundey, whose ancestor Samuel took over from cousin Henry in 1876. The brand, which continues to fill the Windsor wardrobes, has held a warrant from Queen Elizabeth II since 1952.

Despite its impressive heritage, Poole’s atmosphere is comfortable rather than starchy or showy. About 1,200 suits—which start from around $4,900 each and take about 3 months to make—are made there each year. “Our customers are not so much celebrities as CEOs and captains of industry,” Cundey says. Nevertheless, a theatrical touch can be found in the numerous ceremonial outfits the brand has produced for the royal family, such as the uniforms worn by the postilions riding in the procession at William and Kate’s wedding in 2011.
In contrast to its entrenched traditions, Poole is credited with some fashion firsts. “The Prince of Wales [later King Edward VII] had bought Sandringham and wanted something less formal for a party,” says manager Anthony Rowland. “He asked Henry Poole to cut the tail down.” Thus the modern suit was born, which led inexorably to the dinner jacket or tuxedo, pioneered by Prince Edward’s U.S. friend James Brown Potter.

Still, notes Cundey, “We’re more about timelessness.” Henry Poole’s signature cut has a natural shoulder line and a waistline that actually is at the waist, not the hip. “It’s a classic, balanced look. But our principle is that the suit should always be discreet: secondary to the person.”

At the back of the shop, past two fitting rooms, is a stair that leads down into a busy basement. Here, past many toiling cutters, another history lesson awaits. In a paneled room Rowland points to many mighty ledgers dating back to 1846 and bound in green moleskin. Historic artifacts in their own right, these volumes are filled with exquisitely handwritten specifications, including the dimensions of countless illustrious frames. What has changed in the intervening century and a half? Rowland smiles. “I’m afraid gentlemen were considerably slimmer then.”

Earlier this year, Margaret Barbour, chair of the Barbour clothing brand, revealed that in 2012 (Queen Elizabeth II’s Diamond Jubilee year) she offered the monarch a new Barbour jacket. Surely, she thought, the queen’s old faithful must be a bit battered by now and in need of replacement. The queen, however, politely refused and instead requested that her Barbour Beaufort jacket be re-waxed. After all, this British perennial—just like a stately home—benefits from looking lived in.

A Barbour waxed jacket is a favorite of the queen.  Photo: Courtesy

Today Barbour sells a full range products, from footwear to dog blankets, in 40 countries around the world. But its waxed jacket remains a familiar staple that is often passed down from father to son, from mother to daughter, like an heirloom. This durability is a point of pride for the company, which was established in 1894 in England’s wuthering northeast, making waterproof oilskins for old salts. A fifth-generation family-owned business, the brand is now better known for clothing the sporting gentry than rugged herring fisher­men. Still, something about the classic waxed jacket conveys the very essence of the British countryside, making it a royal essential.

“We’re extremely proud to supply outerwear clothing to the royal household,” says Steve Buck, Barbour’s managing director. “It reminds our staff that our workmanship and enduring quality are recognized by one of the highest authorities in the land.” And as the queen is well aware, they’re just as pleased to revive an old jacket as they are to sell a new one.

Tartan is much more than just plaid cloth, as the people at the almost 150-year-old Highland outfitter Kinloch Anderson are pleased to inform you. Said to be rooted in Scotland’s old clan system, tartan designs are fiercely guarded, and rogue wearers of, say, a military tartan will be severely frowned upon even today. Kinloch Anderson is at once a modern, global firm (it even produces a whisky) and a family-held company with deep roots in its native Scotland. The brand not only makes tartans and Highland uniforms for Scottish regiments but also has been appointed to serve Prince Philip and Prince Charles, as well as Queen Elizabeth—whose Balmoral Tartan, by the way, should only be worn with her permission.

Turnbull & Asser is one of the eminent names associated with shirts and ties, having supplied its wares to Prince Charles as well as distinguished figures including Pablo Picasso and Charlie Chaplin. “We’ve proudly held the royal warrant as shirtmaker to His Royal Highness the Prince of Wales since 1980,” says bespoke director Steven Quin, who also takes pride in the fact that the brand still makes its shirts in Gloucestershire and Kent. Prince Charles, he says, likes “a classic repertoire: sober colors, pinks and lilacs, soft stripes, medium-spread collars, and double cuffs for links.” Although Quin is mostly tight-lipped about the preferences of his royal clients, he did relay how, after breaking a shoulder in a riding accident in 1990, Prince Charles had a shirt made with a matching sling.

A recipient of one of the odder royal warrants, Fulton Umbrellas meets each season with a representative of the queen to deliver her needed umbrellas—indispensable appurtenances, given the moody British climate. Fulton’s signature is the transparent PVC Birdcage umbrella, invented by Fulton in 1963 to shield Her Majesty from the rain while still enabling her to see and be seen. “It was tremendously innovative at the time,” says company CEO Nigel Fulton. “We worked with [fashion designer] Mary Quant, and it gained lots of attention. The warrant is such an honor. We’re part of umbrella history.”

The noted London shoemaker John Lobb holds warrants from both Prince Charles and Prince Philip. “Our first boots were made by my great-great-grandfather,” explains Nicholas Lobb, the fifth-generation scion and manager. “He moved to London from Cornwall and, luckily, in 1863 made shoes for the Prince of Wales.” The rest is cobbling history. The company’s biggest sellers include the Oxford Cap and the Double Monk. Lobb refuses to disclose which shoe the royals prefer, but Charles was fitted for his first pair of black Oxfords in 1971, and his shoes are still made using that original last.

As a supplier to the royal family, wool maker Johnstons of Elgin was recently commissioned by Prince Charles to revive an old pattern called Albert Tweed, whose reds and grays conjure the granite terrain of Aberdeenshire: the location of the family’s Scottish estate of Balmoral. Best known for its cashmere, which has been made since 1851 in the same Elgin mill, Johnstons has also garnered a following for its camouflaged Scottish Estate Tweeds, whose pattern enables the wearer to blend in with the local foliage.