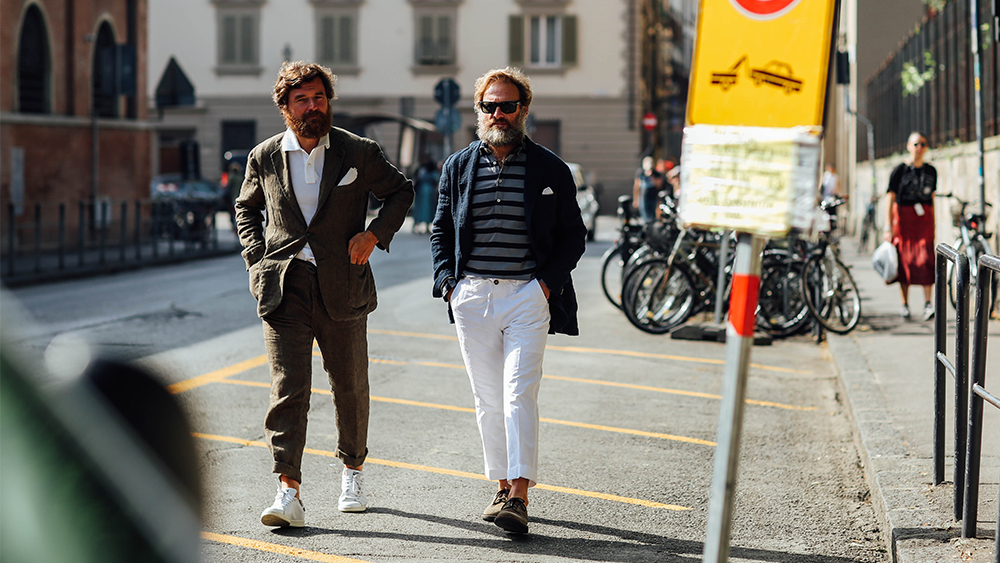 It’s hard to put a finger on what makes Spanish menswear so appealing. You might overhear a man saying he only suits Neapolitan tailoring, or that his look is ‘more English’ (Hemingway, for one). Perhaps he shops the couture houses of Paris, or cops Ivy League staples in New York City. Despite having as much craft and provenance as its European brethren, Spanish style remains a menswear deep cut. ¿Por qué?

In an effort to better understand the Iberian allure, we spoke with Mr Porter’s buying manager Daniel Todd, a dedicated follower of Spanish fashion. “The influences seep into every part of Spanish culture—but it is rooted in well-made craft and tradition, with a functional purpose.” As an example, he points to one of Spain’s biggest contributions to the style canon: the espadrille, or zapato. “Traditionally a peasant shoe,” Todd says the humble slip-on rose to fame when it was “re-interpreted by Castañer for YSL in the ’70s. Now it’s a summer essential.”

One Spanish export perhaps even more influential than the espadrille is Cristóbal Balenciaga. “Even though the brand is headquartered in France, there’s no denying its roots,” Todd notes, adding that you can visit the eponymous designer’s home and museum in Getaria. “Creative Director Demna Gvasalia took inspiration from the founder’s Spanish Catholic origins for his fall line.”

Tradition is key in Spanish dressing—tied up in conservative, Catholic values, the countryside lifestyle and myriad regional customs and festivals. If you’re raised in Spain, you’re getting a lot of use from a suit, whether it’s going to Seville’s April Fair or Sunday Mass. Todd highlights the country’s relaxed take on tailoring as a point of differentiation: “Brands like Man 1924 have done such a tremendous job capturing that effortless elegance I believe embodies the essence of Spain.”

It’s worth considering that Spain missed out on the culture quake of the 1950s and ’60s, when the birth of commercial aviation yielded widespread stylistic cross-pollination. “People forget that modern Spain started during the ’70s, after Franco,” says Jorge Navares, who along with Carlos Castillo is the third-generation at the helm of Man 1924. While much of Europe enjoyed its post-war boom—the Swinging Sixties in London, Parisian Nouvelle Vague or Italy’s La Dolce Vita period—Spain was under the grip of fascism. “Luxury was in the back of our minds,” says Navares. “The most important thing was how functional our clothes were.”

More than a prevailing silhouette or flourish, Spanish design stands for quality and utility. Perhaps this is why Spanish artisans are so revered for footwear—the likes of Carmina, forum-favorite Meermin and the fantastical creations of Norman Vilalta are increasingly sought-out by discerning men of style.

Navares believes that contemporary Spanish menswear is “classic, influenced by British dressing [but] colorful, with eye-popping tones and checks, wider lapels, ties and collars and a more relaxed fit.” It is perhaps not that surprising when you consider the two nations’ similarities: both have popular monarchies with royal warrants and garments crafted for voguish aristocratic pastimes like hunting (still popular in Spain).

“Country-wear is a major part of Spanish style,” agrees Carmen Alvarez, who runs century-old royal shirtmaker Camisería Burgos (a favorite of bullfighters, Orson Welles and Hemingway). “Lots of tweed, large checks, cord…Today, you find this [worn] in the city, too.” But unlike the Brits’ hardy Donegal suits and Aran knits, Spaniards specialize in breezier fare. “The difference is that these styles are made with our weather in mind,” says Navares, noting a preference for linen, Viyella and other airy textiles.

While hunting gear may be native to the lush, wind-swept valleys in the North, there’s no ignoring the influence of Spain’s beachy coasts. Todd points to Jonathan Anderson’s work at the Madrilenian house of Loewe: “His send-up to Paula’s Ibiza, inspired by the feel-good spirit of the Balearic boutique and the romanticism and vibrancy of a Spanish summer.” Loewe might be one of the country’s biggest names on the global luxury market, but—originally founded by a group of artisans and still a purveyor to the royal court—it is as Spanish as paella.

When it comes to pinpointing a distinctly Spanish garment, Alvarez cites the Teba—another example of the Anglo-Spanish alliance. Legend has it the Teba was first crafted on Savile Row to the specifications of King Alfonso XIII. His friend, the Count of Teba had it adapted by Bel y Cia for shooting in the hot Spanish countryside. The lightweight, cardigan-like Teba was soon adopted by farmers and laborers and, today, is widely worn as a smart-casual blazer. The best are still made by local tailoring houses (like Reillo Sastre, Lange and Calvo de Mora).

This isn’t to say all Spanish men wear tailoring (they don’t) but much of what is now sported in wealthier Madrid suburbs like Salamanca has a distinct Ivy League-Rowing Blazers vibe. Their proclivity for preppy-staples—penny loafers, tennis shoes, oxford shirts, repp ties—might be owed to values shared between puritan New Englanders and Spanish Catholics. “That part of our culture hasn’t changed,” says Alvarez.

So, Spanish style: traditional, influenced by royals, colorful, slightly British, relaxed but elegant—and very much its own oeuvre. Or, in other words: Pedro Almodóvar’s lost episode of The Crown.