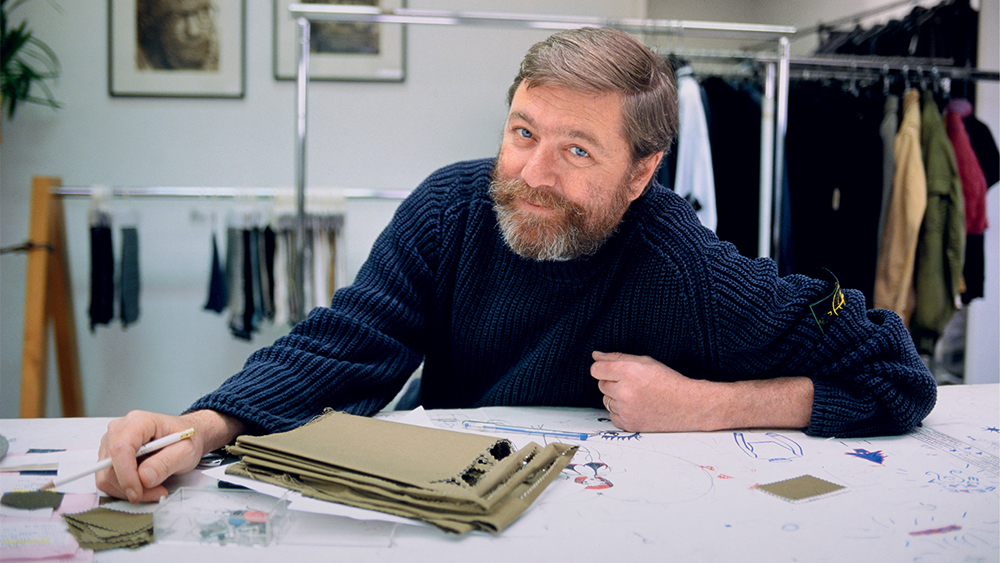 Stone Island doesn’t like to think of itself as a fashion brand. But not in the clichéd “it’s a lifestyle” kind of way; Stone Island isn’t concerned with this season’s latest styles so much as it is the future. It is a company that focuses on the nuts and bolts of design, engineering fabrics and constructing garments to be stronger, smarter, more efficient. And yet, Stone Island has pioneered many of the ideas that define capital F Fashion today. It has, in its way, written the book. Now, it literally has.

Stone Island: Storia, out from Rizzoli on October 6th, is a comprehensive monograph detailing the brand’s genesis from a factory in a small Emilia-Romagna village to a global sportswear cult. It’s no exaggeration—since its founding in 1982, Stone Island has inspired a fervent following among subcultures from paninari (luxury-crazed Italian teens of the 80s) to British football fanatics and American hip-hop MCs, all proudly identified by Stone Island’s signature compass badge. Despite its widespread acclaim, the Italian brand’s story isn’t particularly well-known. Unlike most conventional fashion houses, Stone Island doesn’t frequently trot its heritage out. As a result, it’s rarely recognized for the roads it has paved for menswear and streetwear as we know them.

The new book delves into the brand’s 38-year history and many firsts: championing workwear when everyone else was talking tailoring, borrowing from the world of industrial design to invent entirely novel means of production, eschewing conventional branding to generate authentic hype (back when Supreme was just an adjective). Dedicated fans will be thrilled to find a thorough archive of the brand’s most innovative designs—from the classic Ice Jacket to more recent Shadow Project prototypes—explained in near-clinical terminology. Even in print, Stone Island stays true to its utilitarian DNA.

We Zoomed with Carlo Rivetti, the brand’s CEO and creative director, to discuss Stone Island’s impact, the state of fashion and his dream collaborators (not Drake, though he gets top marks, too).

It was interesting to learn how you were a fan of the brand before being a part of it. Do you remember what first attracted you to Stone Island?

I was working at GFT [Rivetti’s generations-long fashion manufacturing family business], which was only formalwear, and I was thinking that the future of the garment industry would be much more linked to sportswear. So, I started researching the best Italian sportswear companies. I discovered this company in a small village between Bologna and Modena, owned by C.P. Company. I was really attracted to the technology.

Considering your background with GFT—working with Armani, Valentino, Ungaro—this was such a different approach to menswear, and very forward-thinking. How would you define menswear today?

We are living with change—look, you’re working from home—and consumer habits are changing. I think it is a very difficult time for formal jackets and ties, formal shirts. The future is much more relaxed: sweatshirts, stretch fabrics.

What is the modern equivalent of the suit and tie?

I think you can be elegant wearing a black sweatshirt. I always remember Mr. Sergio Marchionne, the former CEO of Fiat, who was always in a blue crewneck sweater, for every occasion. He gave an idea of a more modern efficiency than a traditional suit.

The advertising and branding in the early days—no models, no lifestyle imagery—was a pretty bold choice for the time.

Yes. To me, the most important thing is the product. When we started this approach, the idea was…you know the manual of a car? When you buy a car, they don’t say to you ‘Oh, you’re buying a beautiful car, fantastic color.’ They only speak to the performance: consumption, ignition, this type of information. So, it’s only that type of information we want to use, about the performance of the fabric.

When we started to shoot models, we were thinking about mugshots and this idea of “the eye of the tiger”. The guys we shoot always have a serious expression, the position is always the same, the only thing that changes is the product.

Looking at the old ads, it’s amazing how many people are doing the same thing today.

I have a friend who traveled to Indonesia and came back with a fake Stone Island baseball hat—we don’t sell in Indonesia. I think it’s fantastic to be copied, it means you are on the right side. If nobody copies you, you’re probably doing something wrong. I’m proud when they try to copy, but the way we make the garments—it’s a mess—nobody can really copy. You need to be a little crazy [to do what we do].

Stone Island has pioneered so many technical innovations. Is there one you’re proudest of?

One of the key points for me was when we were able to garment-dye polyester. In the first 21 years, we were only able to dye natural fibers. When we were able to dye polyester, we opened a totally new field of research. That was really an unbelievable innovation because it…it really opened up the future. Working with man-made fabrics, innovation comes really fast each season. We’re still improving our know-how, we still study.

A lot of the processes you use are geared towards achieving a multi-dimensional, lived-in look. Why do you think that’s so important?

When you dye a fabric, it’s flat. When you dye a garment, it’s three-dimensional. I saw that the depth of color was totally different when you garment dye. At the shop, I see when guys try a garment on, they feel cool. They do this [mimes flexing]. You really feel strong in a way. It’s also the military, workwear aspect that makes Stone Island so special.

The way the brand is set up, it’s almost more of an industrial design company than a fashion brand. But people inevitably look to Stone Island as fashion…

We feel closer to industrial design because of the way we talk, the way we show. I think the mechanisms of the fashion system have become a little old. For several years now, we launch the new collections on social media when they are available in the shops. In my opinion, this creates hype.

If you do a fashion show in Milano, you show something that will enter the shop in a year’s time…it’s too long. The world has become so fast. I remember when I was a young guy, fashion shows were an average of 40 minutes. If you do a 40-minute fashion show now, they will kill you!

And I always say, we only do men’s products. Men are simple: we need friends, to talk about cars, football, drinking a glass of wine. We don’t need so much. But the womenswear world is totally different. So, I understand that is real fashion. Like I said, when I see our final customer, they do this [mimes flexing] and then they look for the pockets—we need pockets because we don’t know how else [to stand]! The complexity of women’s…mamma mia!

That’s something very hip today…not doing a show, having “drops”. It’s very much how streetwear operates.

Again, I think streetwear, sportswear, non-formal is the future. When I was a young student, I had to go to school in a jacket and tie. Then I saw my son going to school like I go to the gym. If you don’t learn as a young guy to wear a formal jacket, you don’t feel comfortable. Formalwear will continue for special occasions; the young generation still wants to dress up.

In terms of conventional fashion brands, are there any you admire?

I admire a man, his name is Roberto Cappucci. He’s a genius, he’s an artist. He never entered the fashion system because he was only doing alta moda [haute couture]. He made the most beautiful women’s dresses that I’ve ever seen in my life. On the other side, I was very honored to work with Mr. Armani. Again, he’s a genius. He reinvented a man’s formal jacket in the ’80s—something very, very hard to conceive—and achieved incredible results. My dream is to do a five-pocket jacket with Mr. Cappucci, just to see what he would do.

You’ve done a lot of amazing collaborations—Supreme, Nike. Besides Mr. Cappucci, is there anyone else you’d love to work with?

There is one, because I admire the product: Apple. A couple years ago, some people from Apple visited the factory with me. We entered the quality control office, and I’m very proud because mine is the only fashion company in the world in which quality control belongs to the product [design] office and not to production. Usually, quality control is thought to solve a production problem. They looked at me and said, ‘At Apple, it’s the same.’ From a philosophical point of view, it could be very interesting.

The brand has such a diverse following; have you ever been surprised by the different groups that have become Stone Island fanatics?

We started selling in China; I don’t want to do something especially for the Chinese market. Because the world is so interconnected, you can’t change your language—can’t say one thing to the Chinese, another to Americans. So, I speak Stone Island. If people like it, they will come.

Let’s say I’m surprised how fast it’s happened. There is no marketing strategy, it’s just that now a lot of people are listening. I remember the first time I spoke about subcultures, I had to explain: subculture doesn’t mean a minor culture, it means a different culture from the dominating one. I’m proud that so many subcultures have chosen us.

Is there anyone you’re especially proud to see wearing Stone Island?

I am proud to see anyone wearing Stone Island. As you can tell, I’m very emphatic. I’ll stop people on the street and say ‘Hey! Nice jacket!’ and it happens the other way around. I was in China, wearing a jacket from the 2nd or 3rd season, and a young guy stopped me and explained how we’d built the jacket. It’s a circle.

I loved the story about how Drake was wearing Stone Island and you wound up doing the costumes for his tour.

Drake’s mom, when he was 12 or 13, bought him a Stone Island sweater. So, probably in his mind, it became something he remembered. Then he grew up and, lucky, my son Matteo was living in New York and leaving his apartment building and Drake was entering—his gym was there—and both were wearing the Stone Island badge. When two people wearing the badge meet, there’s a sort of recognition. So, Matteo introduced himself and they started talking. He was planning his tour in Europe and asked us to do the costumes. I went to deliver them and said, ‘Drake, these are only for you. We will never make these garments to sell.’ He’s a fantastic guy, really a fantastic guy. But in general, I have beautiful customers.

If you had to pick one Stone Island product to wear for the rest of your life, what would it be?

The next one! Actually, there is one very special jacket my three kids made for me for my 60th birthday. It’s a one-of-a-kind piece using three different technologies, three different fabrics, three different treatments. It has a special badge and inside, where we put all the information, there’s a dedication to Papà.