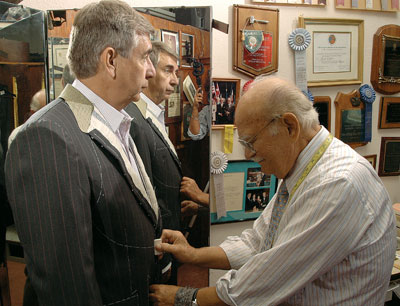 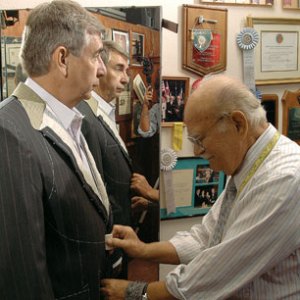 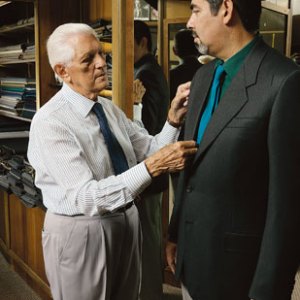 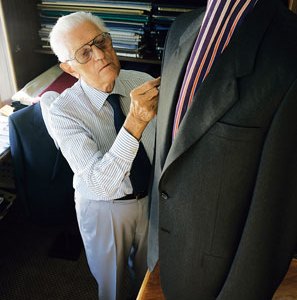 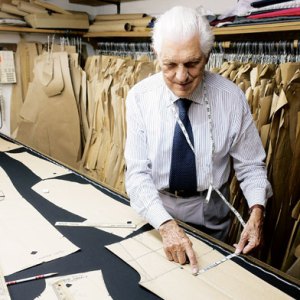 In 1940, a young tailor named Giacomo Trabalza was serving in the Italian army and stationed near the tiny hillside town of Chieti in Abruzzi. Aware of what Trabalza’s profession was prior to the war, his captain, who wore riding pants, requested that the private make him a new pair. Lacking the necessary tools to do so, Trabalza found a local tailor shop, Carlo Vico, and convinced its head tailor, known simply as Nicola, to allow him to work there until he completed the task.

About a decade later, Trabalza moved to the United States, eventually settling in Los Angeles, where he opened his own shop. In 1980, he joined the U.S.-based Custom Tailors and Designers Association (CTDA), the oldest trade organization of suitmakers in America, and met fellow tailor and then chairman of the group, Joe Centofanti, who owns a shop in Ardmore, Pa. During the course of their conversation, Trabalza learned that Centofanti, an Italian-American, had spent his adolescence in that same town of Chieti, where, a few years after Trabalza had passed through, he acquired some of his earliest training from Nicola at Carlo Vico. That shared experience helped them forge a friendship that has lasted for 25 years.

Several years after that first meeting, the men, now two of America’s most prominent tailors, discovered that their backgrounds had even more in common. As youths they learned a similar method of suitmaking while training with master tailor Rocco Aloy of Torino, Italy. During its heyday in the 1930s and ’40s, Aloy’s now-defunct namesake tailoring schools were reserved for only the most promising young talents. Centofanti studied at the school in Rome in 1935, when he was 17 years old. A few years later, Trabalza, who was born in Perugia, received the same training at the Aloy school in Milan. “Anyone who graduated from that school had to be an important tailor,” says the 87-year-old Centofanti, who adds that he has never met another tailor in the United States other than Trabalza who studied there.

Even today, Aloy’s unique style of pattern making continues to influence both tailors’ work. Aloy’s method involves cutting the pattern (the paper model for each piece of the suit from which the fabric is cut) wider than most tailors do to allow for more flexibility when tweaking the final garment. It is a subtle nuance, but a wider pattern allows the tailor to make minor alterations that define the suit’s silhouette.

“The construction is the same,” says the impeccably dressed Trabalza of his and Centofanti’s suits. “But there is a slight difference in the style.” A Trabalza suit typically has two or three buttons, a lightly padded but otherwise natural shoulder, and a silhouette that is very tapered under the arms and through the body. By comparison, a Centofanti suit features a more roped, or defined, shoulder and a less exaggerated hourglass waist.

“My suits have just a flare on the sides to show the waistline. It’s not much, but it gives that sense of a fitted waist,” says Centofanti, who notes that his shape references the British Walker, a lean cut with broad shoulders made famous on Savile Row. “It’s a style that the English lords initiated in my father’s time,” adds the tailor, who, in addition to being trained by the Aloy school, learned the craft from his father and applies his father’s techniques when outfitting today’s aristocrats. “All my life I’ve tried to be the tailor to the chairman of the board.”

The 83-year-old Trabalza learned the secret of shaping suits from his cousin, a tailor named Tao Trabalza, whom he apprenticed with as a teenager in Milan. “Tao used to tell me that the most important thing is to make the customer look as if he lost weight,” says Trabalza, who considers the hourglass structure he has been tweaking for the past 30 years his signature style. “I first developed it in the 1970s, after I began working for myself.”Trabalza spent his first four years in America working in New York under such esteemed tailors as Luigi Deluca and Reggie Patassi. After moving to Los Angeles in 1953, Trabalza worked with Peter Burn, whose business he later acquired. “Joe says my suits are tu la pittura, like a picture, because it looks as if I painted it [on the body],” says Trabalza, who calls Centofanti “the professor.”

When visited recently at his small, fabric-filled shop in West Hollywood—a dark paneled room that has not been remodeled since he moved into it in 1963—Trabalza was grabbing at layers of fabric under the arms of a rather portly client. He was explaining how and where he would remove excess material to give the gentleman a trimmer profile. Trabalza honed his skills in fitting large men while working with Arnold Schwarzenegger, for whom he has been making suits since 1984. At that time, Schwarzenegger’s 52-inch chest and 34-inch waist posed a challenge that any tailor would find daunting. “When he made a muscle, his body extended six inches—during the first two fittings he opened the seams of the suits,” recalls Trabalza, who made three models for Schwarzenegger before solving the problem. “I ended up adding six inches in the back rather than in the chest, as most tailors would do, so the suit would still look natural,” he explains, describing how he cut the arms in a convex shape instead of a concave shape to accommodate the muscles. Trabalza has since cultivated a following of large-size men in addition to more average-size celebrities, studio heads, and politicians.

While Trabalza does not depart from his distinctive suit style, Centofanti is more flexible. “I’m not like Giacomo or even Bill Fioravanti or Tony Maurizio,” explains Centofanti, citing other prominent American tailors. “They all have only one suit model and that’s it. I like to make every kind of suit, whatever the customer wants.” He adds that Fioravanti and Maurizio will even refer to him their customers who want a natural-shouldered suit because they will not make that style.

Although decades ago he solidified his standing as one of America’s master tailors, Centofanti continues to study his craft, with an eagerness to learn about any innovations or other changes in suitmaking. In August, he was among only a handful of American tailors who attended the World Congress of Master Tailors in Berlin, Germany, where he learned about a new suit shape that is loosely modeled on the Neapolitan style and produced by his friend Franco Puppato of Venice, Italy. “The suit had a small shoulder, a roped sleeve, and was cut in a very clean way close to the body, which my customers won’t like,” he says matter-of-factly. “But it was the only garment at the show that looked very modern—like it was going to be the future of suitmaking.”

The notion of an octogenarian tailor contemplating the future of menswear seems ironic, until he presents samples of his tailored clothing, which he makes entirely by hand at the Pennsylvania shop he has operated since 1953. There, in a series of rooms that have changed little in half a century, jackets hanging on dress forms exhibit a multitude of styles, all appearing thoroughly contemporary. The 70-year-old Rocco Aloy schoolbooks sit open on a table, ready to be referenced or to provide inspiration. “Sometimes when you are making a new pattern, it’s a good idea to go back and review the basics,” says Centofanti, who produces five suits per week, with prices starting at $2,600.

He and Trabalza, whose California-made suits start at about $3,000, continue to compare notes frequently. “When he’s making something very special, like a full-dress tuxedo, we’ll talk about how he might change it, update it,” says Centofanti. “I remind him of things, and he reminds me of things that we read in the books.”Neither tailor plans to retire anytime soon, although Centofanti attempted to do so almost a decade ago, when he sold his business to a much younger tailor who planned to expand it by outsourcing most of the tailoring. Centofanti’s customers did not respond favorably to the changes, and the business collapsed within six months. Centofanti reacquired the debt-laden operation and revived it. “I was so happy to take it over again because, in truth, I was getting bored—I’m not good enough or young enough to play golf all day,” he says, adding that business has never been better. “I’ve sold more cashmere in this one year than in all the time I have been in business.”

Meanwhile, Trabalza, who lost both his sons at early ages, complains about the lack of worthy apprentice tailors. He cannot find any who want to put in the hours and learn the necessary skills and who possess the patience to accommodate the whims of his clients. Even if he or Centofanti could find someone to take his place, neither is likely to move on willingly.

“These are two of the most humble, talented men I’ve ever met,” says Leonard Logsdail, a New York custom tailor and current president of the CTDA. “Most modern tailors are not necessarily tailors at all. They are salesmen who try to make suits via a factory. But these guys actually sketch the paper patterns, cut the cloth, and make the suits by hand. And when they go, there aren’t going to be many left who can do that.”