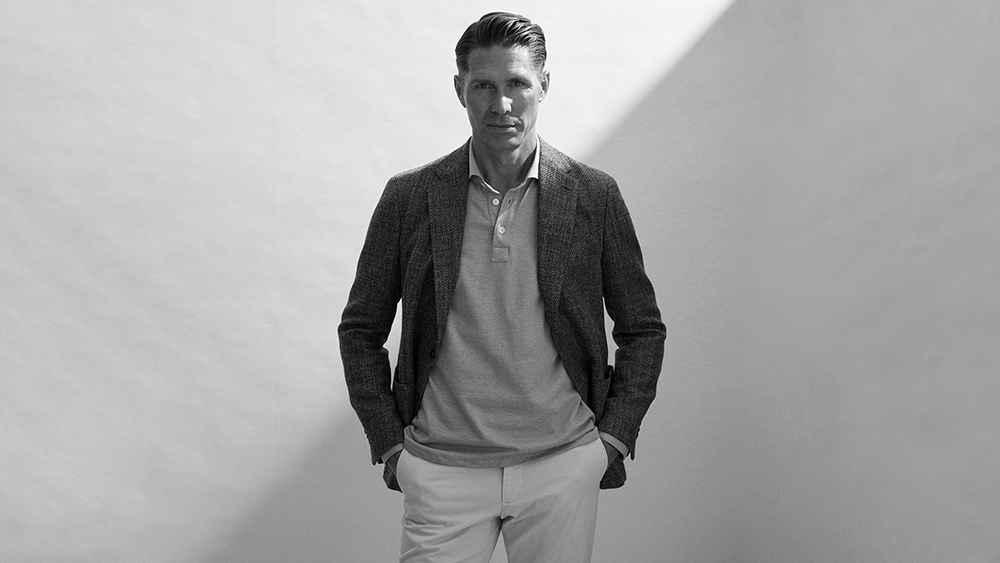 Mats Klingberg’s approach to style is firmly rooted in reality. His knack for making pragmatism look elegant is one of the reasons Trunk, his store with outposts in London and Zurich, is beloved by menswear enthusiasts the world over. Since it first opened 10 years ago, Trunk has become a destination for refined yet easygoing finds by a diverse roster of niche makers, from Ring Jacket suits to Valstar suede jackets and Alden boots.

Klingberg’s astute eye for what works in the real world might have something to do with his unconventional route to becoming a retailer. Born in Sweden, his family moved to Sao Paolo when he was 10 and did a fair share of traveling—piquing his interest in how style translates around the globe. After studying in Switzerland and Paris and getting a master’s in business in Sweden, he began his career in finance and eventually moved to London to work for American Express. In his role as global manager for luxury retail, Klingberg worked with marquee brands like LVMH and Richemont to draw Amex cardholders to their stores from Stockholm to Singapore.

Well-versed in customer-insight studies, he decided to have a go on his own in 2008. “Although there was no shortage of great menswear stores in London at the time, what I thought was missing was an old-school gentleman’s shop that had a good mix of everything,” he recalls. “A tight edit of wardrobe essentials for the man who appreciates great quality but doesn’t have the time or energy to run around and find these things,” he continues, noting that many of the brands he was wearing at the time were procured during his travels and not readily available in the city he called home.

While he didn’t have any formal experience, Klingberg observes that “being naïve was a good thing, going at it from a consumer perspective.” He bought what he loved—and shoppers loved it, too. We spoke with Klingberg about the wisdom he’s gleaned over his years in the business, from the hair product he can’t live without to why you need an umbrella upgrade.

“The term ‘smart casual’ gets used a lot, and I know it’s something that confuses a lot of guys but, for me, it’s pretty clear what it is. I’m very often in a pair of chinos, an oxford or chambray shirt, maybe a sweater, a gray or navy jacket. Rather than ‘smart casual,’ I prefer to call it ‘effortless elegant’. It’s a look that fits into most situations—you’re never overdressed or underdressed.”

Klingberg in a variation on his uniform; MCR poplin shirt ($145).  Trunk

The 5 Pieces Every Man Needs

“A navy jacket is a no-brainer. A nice navy hopsack blazer works well with lots of different things—grey flannels, jeans, chinos—and works year-round. Of course, you need a good suit. If you have a navy jacket, maybe go for a gray suit. Ties aren’t as relevant as they once were, but everyone needs at least one nice tie. I think a navy grenadine is an important staple. A white or light blue shirt—what’s important is that it fits you. I have very long arms so I do made-to-measure shirts; we do them with a brand called MCR from northern Italy. And I think a pair of beige chinos is really important.”

The Accessory You Shouldn’t Overlook

“A nice umbrella. Generally, people don’t think of them as an accessory, but it does compliment your outfit. And most carry something cheap that they bought at the closest newsstand when they got caught in a downpour, but if you invest in a really nice umbrella, it stays with you. Look for one that’s small enough to fit in your bag so you can always carry it around. We have [one from] the brand London Undercover.

It’s all in the details—a nice pen, a nice notebook—all those things you don’t really think about are worth investing in something more considered.”

The Grooming Product He Swears By

“Since I’ve gone to Japan a lot, the one hair product I’ve been using for almost 10 years is from Shiseido. It’s called Uno, and it’s actually only available in Japan. Because of the pandemic, I’ve had friends in Japan send it to me. It’s not greasy at all, it’s just sort of perfect for keeping my hair in place.”

“It comes down to how to dress ‘smart casual’. I think lots of guys feel comfortable in the suit they wear to the office but when it’s time to dress down, they still wear their formal shirt and their suit jacket, combined with a pair of ill-fitting jeans or chinos. That’s just not a very good look. You need a jacket that is more casual, unstructured and a softer shirt that isn’t just a dress shirt with the tie taken off.”

“Because I mainly live in Switzerland now, I spend a lot of time in the German-speaking world. There’s a Tyrolean jacket with a sort of Manadrin collar; you see it a lot in Bavaria or up in the mountains, in the chalets. It’s something I wouldn’t wear so much in London, but here in the Alps…I’ve been doing this for 10 years, and there’s only so excited you can get about a new blazer, but this is a new category I’m diving into.”

The One Trend He Wishes Would Disappear

“I don’t know if it’s a trend but harnesses—like some celebrities are wearing, like at Louis Vuitton. I just don’t agree with these items that don’t have a function. They’re just a bit gimmicky. But, fashion is fun so if people get joy from that, let them wear a harness. It’s just not for me, and I wouldn’t recommend it to anyone.

Also, capes. A couple of years ago at Pitti, all of these people I know were in capes. It’s like harnesses—it’s just not about reality, it’s living in an Instagram world.”

“I love scarves. I have lots from Begg & Co. in Scotland, we did a collaboration with them. It’s a way to add a bit of texture and volume to an outfit that is otherwise quite basic.”

His Advice for Shopping

“A lot of guys see a look on a mannequin or in an ad and buy the whole look, which is great, but if you’re buying a lot of different looks, they don’t necessarily all go together. In my wardrobe, I can go in blindfolded and pull out a jacket, a sweater, a trouser and they will work together. Because they haven’t been bought as separate looks, they’re pieces that can be matched or dressed up or down in different ways. It’s a bit Marie Kondo—declutter.”

“Meeting so many men over the years, I’ve realized how much anxiety there is over getting dressed and how many guys still need their wife or their partner to go shopping with them and give their approval. There’s so much contradictory advice out there, there’s genuine anxiety about getting it wrong and not fitting in. This should be quite simple and fun and make you feel good. I want our customers to not have to worry about what they’re wearing.”