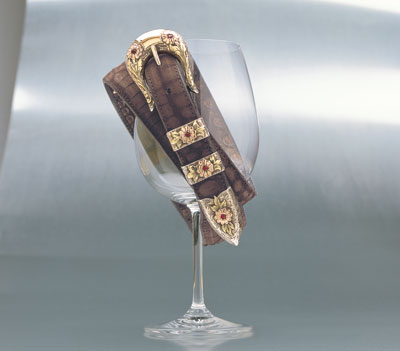 John Winston, an artist who prefers to go by simply Winston, recently carved a 391-carat chunk of turquoise into the shape of an American bald eagle. The piece is an impressive example of his work, which involves carving depictions of wildlife or Native Americans from pieces of rough turquoise, mother-of-pearl, and other gemstones and minerals. As with his other creations, Winston did not intend for his eagle to be displayed on a mantel in its owner’s home; he expects the owner to wear it on his belt. Winston crafts unique belt buckles that are precious enough to become family heirlooms.

“There is absolutely no one in the world who makes buckles like him,” says Todd Rauchwerger, owner of the J.W. Cooper stores in New York City and Bal Harbour, Fla., which have carried Winston’s buckles for more than a decade. Rauchwerger says he could have sold many more of the $1,500-to-$6,500 buckles over the past six years if the artist had not spent much of that period living and working in an RV with no telephone or Internet access.

“I called him once to place a $6,000 order, and his phone had been disconnected,” says Rauchwerger, who searched for the elusive designer for months before he received a Christmas card explaining his whereabouts. “It said something like ‘Dear Todd, I got tired of people, so I sold my house, bought an RV, and set up shop in my mobile home.’ ” Winston recently established a more permanent address in Daytona Beach, Fla., but his flamboyant designs remain difficult to acquire because he produces fewer than 115 buckles a year. “I can see them doubling or tripling, up to $10,000 or $15,000 at least, with time,” notes Rauchwerger of the buckles’ value as collectibles.

Much like custom cuff links or a limited-edition watch, a belt can reflect the wearer’s appreciation for quality and workmanship and demonstrate a sense of style. “Unfortunately some men pay a lot of attention to their clothing, but attach less importance to their accessories,” says Beatrice Amblard, who worked at Hermès for more than a decade before establishing her own custom business, April in Paris, in San Francisco six years ago. “If a man has a great suit and a beautiful pair of shoes, and he wears them with a poorly made belt, it’s a good indicator that at some point his sense of style just stops.” Amblard produces understated 18-karat gold or sterling silver buckles that she pairs with simple, high-quality alligator or calfskin straps. Amblard says that acquiring a custom buckle and belt can require research and legwork, unlike ordering a bespoke suit or bench-made shoes, which are more widely available. Retail outlets for such belts and buckles are limited, and most of the country’s finest buckle makers—often artisans who learned the skills from their fathers and grandfathers—ply their craft in remote locales, often in obscurity.

The buckle is only part of the equation. Usually, a custom belt necessitates the contributions of two craftsmen: a silversmith who makes the buckle and a leather artisan who manufactures the strap. The two components are sold separately, so the client or retailer must put them together to make the complete belt. That task can become difficult because, like some of the top buckle makers, at least two of America’s best strap makers, Bruce Erickson and Bill Niemczyk, prefer to remain out of the limelight.

In a nondescript building in a one-street town between Santa Fe and Taos, N.M., Erickson, the owner of Chacon Leathers, produces elaborate, hand-tooled straps from cowhide and nubuck alligator skin. Niemczyk—who owns Wm. Julian Designs and has produced prototypes for Giorgio Armani, Ralph Lauren, and Calvin Klein—fashions custom belt straps out of crocodile, ostrich, and sharkskin, in the basement of his Granby, Conn., home. Of course, a few artisans—including Neil Hunt of NR Hunt Studio in Minnesota, James Reid of New Mexico, and the aforementioned Amblard—work with both metal and leather to produce complete belts.You will find notable differences in quality between such artisan-made belts and those that major luxury brands’ machines churn out by the thousands. Nevertheless, Kielty, a silversmith, points out that his handmade solid silver and gold buckles, which start at $250, sell for about the same prices as gold- or sterling-plated designer-brand buckles. “You can’t make 100,000 belts for 350 stores without eliminating some of the processes and the detailing that make them true luxury items,” says Kielty. In contrast to off-the-rack belts, custom buckles are almost always made of solid gold or sterling silver, rather than brass or nickel with silver or gold plating. A Mark Kielty gold Sonoma buckle has 17 beveled surfaces—a typical machine-made buckle may have six to eight sides—and Kielty can spend more than 36 hours just casting, grinding, and polishing a single buckle. “Now, how long would it take me to make 100,000 of them, even if I had a 100 people working on an assembly line?” he asks.

Silversmith Clint Orms references what he calls the “heirloom factor” when distinguishing his creations from mass-produced belts. “Sometimes when I compliment a man—whether he is in his 80s or a teenager—on his belt buckle, he’ll tell me it belonged to his grandfather,” says Orms, who was a bull rider until the early 1970s, when he began making buckles with an ornate style influenced by the designs of antique silver teapots and flatware and Victorian jewelry. Now one of the country’s most renowned buckle makers, Orms turns out elaborate, gem-encrusted buckle sets that have sold for more than $58,000. “To me the most important part of my business is making something that is going to touch somebody and be passed down from generation to generation,” he says. “And when you use solid silver and gold, the patina just gets better with age.”

A buckle maker usually employs the stamped, or bench-made, process to produce a Western-style buckle. He uses die stamps to cut the pieces that will form the buckle from sheets of nickel (in the case of inexpensive buckles) or sterling silver or gold for premium-quality designs. Then the buckle maker solders the individual pieces into a hollow, three-dimensional form before cleaning and polishing. For standard belts, the process ends there, but custom silversmiths then will add more elaborate embellishments that can include gemstones, scrollwork, overlays of sterling or gold, and engravings of figures, logos, or crests.

“This is not a machine-stamped process like most rack belts,” explains Casey Vogt of Vogt Silversmiths in Woodland, Calif. Vogt’s grandfather, a cowboy/silversmith who started out selling bits and spurs at rodeos, founded the company in 1969. “Every buckle is a very individual process, so there will always be differences, even if they aren’t obvious to the naked eye.”

Because they are solid metal, cast buckles involve a more intricate and often costlier method, depending on whether the maker is working with nickel, brass, sterling, or gold. First he carves a wax model of the buckle and encases it in a rubber mold. Then the craftsman pours molten metal into the mold and melts the wax to produce the raw metal buckle. Once the buckle has cooled, the buckle maker removes it from the mold, and then trims and polishes it, a process that can take as long as 56 hours. “Casting is a very technical process. It’s all about getting the temperature right to prevent imperfections,” explains Vogt. After polishing the piece, the buckle maker often will oxidize some areas of the sterling to create color variations before adding adornments such as gold wire or band edging. “Typically with cast pieces, there is no real engraving to speak of,” adds Vogt, whose company makes both cast and stamped designs.

Vogt is an anomaly in this regard; most belt makers specialize in one or the other discipline. Kielty, for instance, makes only cast buckle sets, while James Stegman, owner of Comstock Heritage, considers casting a cookie-cutter process to be avoided. “With casting, you make a rubber mold from an original, and everything after is a copy,” he says, dismissing the fact that the belt makers still customize each casting. Instead, the third-generation silversmith works with 6-by-36-inch sheets of sterling, and cuts from them fanciful, often ostentatious Western buckle sets incorporating floral embellishments, filigreed gold overlays, and, in the case of a current design priced at about $12,500, diamonds. Such elaborate work is a radical departure from the inexpensive nickel trophy buckles that Stegman’s father and grandfather originally made for rodeo prizes. The company continues to produce the prize buckles in addition to its bespoke offerings. “I do everything myself but the engraving,” says Stegman, whose hands touch every custom buckle that leaves his four-man shop.

Engraving is often the final and most intricate stage of the manufacturing process. The engraver uses a tool resembling a tiny ice pick to etch designs that are far more elaborate than a typical monogram. The artisan sketches lacy patterns or renderings of scenes and cuts them into the metal, working from various angles to enhance light refraction. “The engraving,” says J.W. Cooper’s Rauchwerger, “is like a belt maker’s signature.”