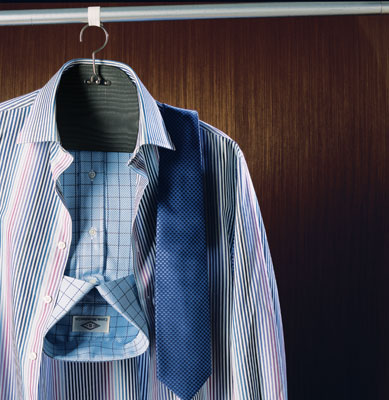 Custom clothing may enable the wearer to express his unique sense of style, but of the more than 100 custom shirts that Louis Bershad orders each year, the ones he relishes most are distinguished by features initially fashioned for another man. It is not by chance that Bershad’s shirts with the sharply pointed button-down collars and squared-off 31Ú2-inch cuffs with nickel-size buttons look like those that Dean Martin once wore. “There are some people who you don’t mind dressing like. If someone said to me, ‘Gee, you dress like Dean Martin,’ I’d probably buy him a shirt,” says Bershad, the president of a Hollywood talent agency.

Bershad first saw these idiosyncratic flourishes on design sketches belonging to the late Anto Sepetjian, who founded Anto Distinctive Shirtmakers in Beverly Hills. Sepetjian acquired the documents, along with Martin as a client, in 1987, when he merged his operation with that of Nat Wise, the Rat Packer’s longtime personal clothier. (Wise passed away in 1994, and Martin died on Christmas day the following year.)

Ordering custom clothing to emulate another man’s style may indeed be unusual, but Bershad’s shirts do speak to the vast range of possibilities that bespoke shirtmaking represents. “When I began in the clothing business 30 years ago, a man bought a custom shirt because he had specific fit needs that couldn’t be addressed off the rack,” explains Larry Jay, director of client relations for R.H. Newell, a custom shirtmaker in Medina, N.Y. “He may have been portly or had long arms or no neck, so buying custom was a last resort. Today, many clients wear a standard 16-inch neck and 34-inch sleeve, but they buy custom just to be unique. These men don’t want to be limited by pattern or styling, and most important, they appreciate the difference.”

However, since ready-made shirts have become available in superfine fabrics with hand-sewn sleeves and buttonholes, it can be difficult to distinguish between custom and off-the-rack models. “I had a customer who told me his friends thought his shirts didn’t look like they were custom made,” says Tom Yu, general manager of custom shirtmaker Ascot Chang in New York. “So I asked, ‘How is a custom-made shirt supposed to look?’ And he responded, ‘It’s supposed to be more fitted.’ I said, ‘I thought it was supposed to be made to satisfy whatever the customer wants.’”

A century ago, to make a custom shirt, a single tailor or seamstress would measure the client, sketch a paper pattern, cut the cloth, and fashion the entire shirt from scratch. Today, with few exceptions, custom shirts, like off-the-rack styles, are made by machines in an assembly-line fashion. A salesman instead of a tailor usually does the measuring and then plugs the information into a computer, which generates a paper pattern. However, all custom shirt houses do employ fabric cutters, whose sole job is to cut the material by hand. (It is fiscally efficient to use machines to cut fabric only when producing mass quantities of shirts.) Once the cloth is cut, the pieces are distributed to seamstresses, who specialize in particular components–collars, cuffs, plackets, pockets, or buttonholes. As the shirt progresses through the production process, each seamstress applies her respective skill until the shirt is complete.

A few custom shirtmakers maintain the single-sewer tradition. Alexander Kabbaz is one of them. He and his staff of two other tailors have been making shirts for three decades in a studio in Amagansett, N.Y. Kabbaz is the only U.S. shirtmaker who uses leftover Swiss and Italian cotton broadcloth, instead of dressmaker’s muslin, for his prototypes. The texture of the broadcloth is such that it enables him to see exactly how the shirt will drape on the body. Kabbaz typically produces multiple prototypes over a period of weeks, to ensure that the armholes do not bind, the shirttail stays in place, the cuffs accommodate watches and cuff links, and the sleeve length is correctly proportioned under the jacket. When he is satisfied with the fit, Kabbaz fashions the finished shirt, cutting the fabric by hand on the premises and accommodating every sartorial whim–from special collars, cuffs, and buttons to monograms. “In a really good and expansive week,” he says, “we’ll make 10 shirts.”

Similarly, at Paris Custom Shirtmakers in New York City, a single seamstress sews an entire shirt, but only after the measurements, patterns, and fabrics have been prepared by others. The firm, which employs 14 shirtmakers, includes the name of the sewer next to that of the client on every pattern, so that the same seamstress makes shirts for that individual every time he reorders. “With an assembly line, 10 people may be involved–each with a different sewing technique,” explains Paris owner Atam Sahmanian. “With seam allowances, some might take more and others less, so there is no consistency.” Sahmanian adopted this method from his father, Mark Sahmanian, who worked for Charvet in Paris before establishing his own company in France in 1958. The elder Sahmanian moved the business to the United States in 1974, and at age 72, he still crafts patterns several days a week.

Although Anto Distinctive Shirtmakers and R.H. Newell employ the multiple-sewer method, both draw and cut their shirt patterns by hand. “It’s more precise,” says Newell’s Jay. “Like a master tailor making a suit, the individual who creates and cuts the pattern sees things that you wouldn’t see using a computer-generated pattern. He’ll often tweak things while cutting to create a truer, finer fitting shirt. A computer can’t make those kinds of decisions.”

Anto has the added advantage of operating its own store and making all its shirts on the premises. You cannot expect your shirt to fit properly if you have to communicate with your shirtmaker by phone or e-mail across an ocean, maintains Jack Sepetjian, who, with his brother Ken, has worked at Anto for two decades. The brothers took over the business last year after their father, the company’s namesake, passed away. “If a guy is 5 foot 10 and 275 pounds with a round back and shoulders, he is going to need two or three fittings,” says Jack. “Companies such as Ascot Chang, Thomas Pink, or Turnbull & Asser could send the fitting information back and forth over the ocean–it’s certainly doable–but I don’t know how precise that is.”

All custom makers apply some handwork to their shirts, but a few believe that hand-sewing has limited value. “A lot of Italian shirtmakers hand-sew shoulders and buttonholes, which is an example of incredible workmanship for the 21st cen­tury,” explains Simon Hobbs, general manager of the New York branch of Turnbull & Asser, the venerable British brand that has been making shirts since the late 19th century. Today, all of Turnbull’s custom shirts, like its ready-made products, are made in England by machine. “What is the point of all that handworkmanship,” ask Hobbs, “if it’s only going to get destroyed when you send it out to a $3 laundry?”

Still, those who appreciate the look of hand-sewing usually can have it added, though at a sizable surcharge. At Ascot Chang, an extra $150 will buy one of the company’s Hand Stitched shirts featuring more than 2,000 additional hand stitches on the armhole, cuffs, and collars. But Chang’s Yu points out that the handwork is only aesthetic and does not enhance the shirt’s durability.

Ultimately, though, appearance is the main reason most clients prefer bespoke. Ready-made shirts may be made of superfine cotton woven on silk looms, such as those from Kiton, or include proprietary design details, such as Borrelli’s crow’s foot button-stitching and hand-sewn gussets. They even may feature impeccable single-needle stitching and precision pattern matches, which are evident in every shirt that leaves Charvet’s Paris headquarters. A custom shirt, however, affords one-of-a-kind exclusivity that no ready-made label can match. In addition to owning a shirt created expressly for your physique–accounting for everything from sloping shoulders and arms of varying lengths to an oversized neck or exaggerated chest–you also can act as your own designer by selecting the fabric, cut, placket width, collar and cuff styles, and button and pocket placements.

“Making a bespoke shirt is all about balance and scale,” explains Turnbull’s Hobbs. “If a guy is 6 foot 4, he can wear collar points up to 31Ú2 inches, but you can’t put that same collar on a man who is 5 foot 6 because it just doesn’t look proper. That’s the trouble with a ready-made shirt–you don’t have the option to change it.”

To address the increasing number of customer requests for customization, many fine men’s stores have opened custom shirt departments. Levy’s in Tennessee, Rodes in Kentucky, the Claymore Shop in Michigan, and Kaps in Massachusetts offer more than 350 fabrics that can be combined with 30 different collar and 12 different cuff styles. These shirts are made by Measure Up in Lafayette, Tenn. Measure Up is a division of Individual Apparel Group, which owns Oxxford Clothes and produces shirts that carry the labels of prominent retailers throughout the United States. “All of our bespoke shirts come with true mitered split yokes and extra-thick mother-of-pearl buttons, which are sewn on with machines, then hand-wrapped, so they have shanks like on sport coats,” explains Bonita Schulman, Measure Up’s national sales director. “We also turn the buttonholes on the collar at an angle, so they are easier to unbutton, and the side gussets and the top stitching on the armhole are both done by hand.” The company’s U.S. location enables customers to enjoy a quick turnaround: Shirts usually are delivered within two weeks.

Ascot Chang’s clients in New York and Beverly Hills, by comparison, will wait as long as six to eight weeks for the finished shirt to return from the brand’s Hong Kong factory. Still, Chang’s customers can choose from as many as 4,000 in-stock fabrics, including two-ply solid-colored poplins, Sea Island and Egyptian cotton broadcloths, twills, oxford cloths, gabardines, and linens. “Go into any shirt store, and you wouldn’t get even close to that many choices,” says Yu. The Ascot Chang price range is equally broad, from $100 to as much as $850 for a hand-stitched Sea Island cotton dress shirt. “If you compare a $100 custom shirt with a $500 off-the-rack shirt, the cloth of the $100 shirt is not very impressive,” says Yu. “But even with the $100 custom shirt, you have a lot of choices–40 different options for the collar alone.”

This cafeteria concept is somewhat bewildering to an old-world shirtmaker such as Kabbaz. “I don’t offer 25 collar styles to pick from,” he says. “The last time I counted, we made over 5,000 different collars. Nothing comes from a template. Rather than coming in and choosing from 10 cuffs and 25 collars and various body shapes and styles, for every new client, we start with a blank piece of paper, and we draft his shirt from scratch. My philosophy is simple: Custom is whatever the client wants it to be.”