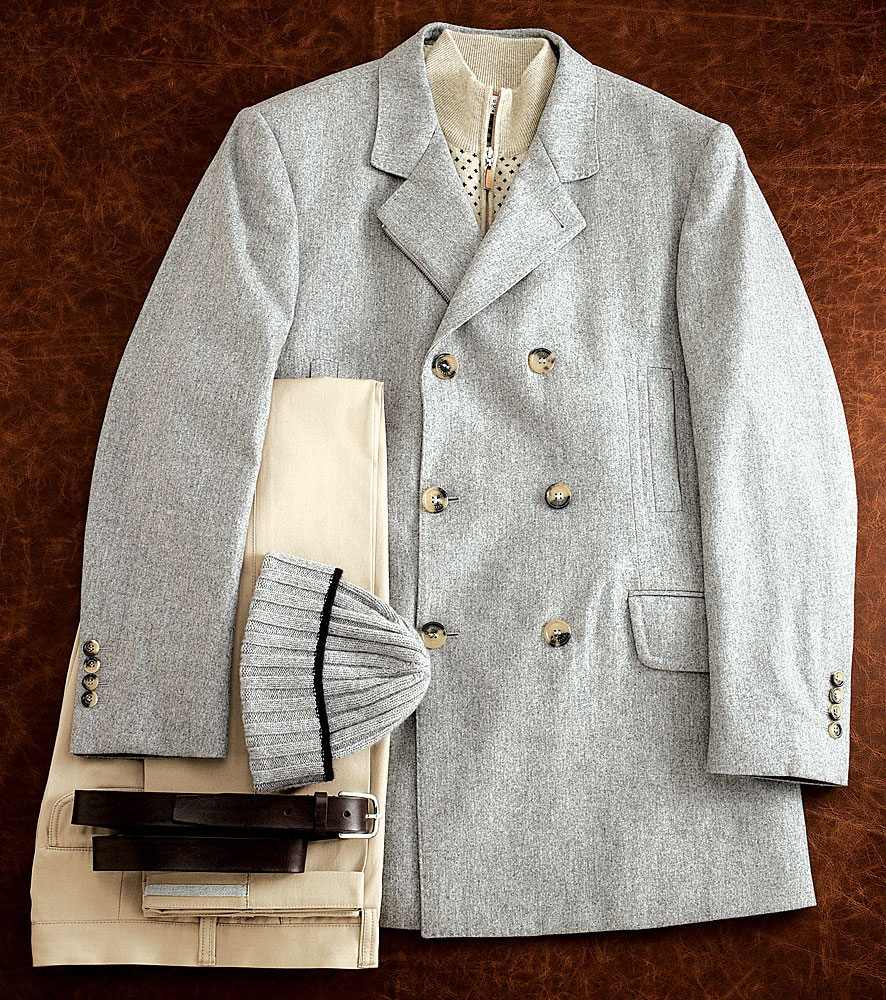 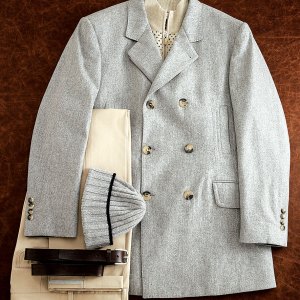 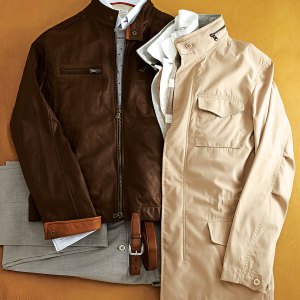 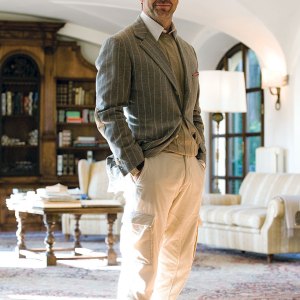 The sounds of rapping hammers and buzzing saws echo through Solomeo, Italy, as they have for much of the past two decades. On this summer day, construction crews are on schedule to complete the hilltop village’s first public theater, the Foro delle Arti, for its September 2008 opening performance. Some of these craftsmen have been working steadily in Solomeo—in Italy’s Umbria region—for 22 years, moving from one project to the next. They began by restoring the 13th-century castle that dominates the village, turned their attentions to reconstructing the Church of Saint Bartolomeo, then moved on to building a school, the Accademia Solomei, and now they are working on the theater.

The construction is not the mandate of the local government; it represents the mission of clothing designer Brunello Cucinelli, who vowed to restore the hamlet—where his wife, Federica, was born and raised—to its picture-postcard state. Cucinelli is revered here as much for rebuilding the town as he is for producing some of Italy’s finest cashmere clothing.

In 1985, Cucinelli moved his fledgling cashmere business from the nearby city of Perugia to Solomeo (located about 80 miles southeast of Florence, near Assisi) with the intention of establishing more than just a corporate headquarters (which he set up in the medieval castle, with his office on the top floor); he envisioned a kind of utopian society where culture and a sense of community would coexist harmoniously with commerce. The construction projects are part of that vision. “The buildings we live and work in were built 800 years ago, when they built beautiful things to last and help nurture the people who live in them,” says Cucinelli. “It’s important that we do the same for future generations, regardless of whether we are talking about clothing or architecture or anything else we enjoy.”

Cucinelli, whose boyish good looks belie his intensity, is dressed in one of his hallmark ensembles: trim-cut, cream-colored corduroy slacks with a knit shirt and a pullover sweater, topped with a gray cashmere blazer with suede elbow patches. “I like to look, and dress, as if I were younger,” says Cucinelli, who claims to be 49 but actually is 54.

His jacket’s collar is turned up, revealing an embroidered image of the domed Accademia Solomei. Cucinelli had the school built so that locals could learn about cashmere and clothes making. He also envisioned the school as a place where people could gather and exchange thoughts and ideas, like the coffeehouse in Perugia he frequented during the early 1970s, when he was a young engineering student. There he would play cards and share stories with friends, would-be philosophers, and even a prostitute. “That was a great way to learn about life; that openness to new ideas is what I want to bring to Solomeo,” says Cucinelli, who regularly reads works by Rousseau and Socrates. He lists Gandhi, Martin Luther King, and Charlie Chaplin among an eclectic group whom he calls his “mentors of life,” noting, “Chaplin was a great observer of humanity.”

During the 2006 holiday season, Cucinelli gave copies of the Koran to his employees, to facilitate a greater understanding of the Muslim world. “I’m always looking for ways to encourage a dialogue,” he explains. “We don’t speak anymore as a society.”

As he speaks, Cucinelli pulls sheets of paper from a neat stack on his oversize desk and manically sketches cryptic symbols and diagrams: a vertical line that divides the page in half, a half circle that stands for the Accademia’s domed roof, and a few words in Italian that he vigorously underlines.

Behind Cucinelli’s desk, a 16th-century fresco depicting people in various forms of distress covers the wall. The fresco, he says, offers a daily reminder of how fortunate he was to grow up happy, although poor, as the son of a Perugia farmer. The images also remind him not to neglect the well-being of his 300 employees, who constitute nearly one-third of the population of Solomeo.

Staff members, all of whom are required to leave work by 6 pm, promote and produce clothing made primarily from cashmere that Cucinelli acquires during seasonal trips to Inner Mongolia. His designs are intended to coordinate with pieces already hanging in your closet.

After years of touting the versatility of the solid gray cashmere sport coat, Cucinelli will present sporty, deep Mediterranean blue—not navy—blazers this spring. The blazers are made of cotton fabrics with subtle woven herringbone and striped textures. He also proposes a return to single- and double-pleated pants, now that men’s shops have stocked their shelves almost exclusively with flat-front trousers. “The look is still tailored on top but with more volume on the bottom,” he says of a style that he calls Chaplinesque. The pleats are minimal, allowing the slacks to retain a relatively trim fit. Other distinguishing details of his clothing include contrast-colored piping on interior pockets, casual pants with fully constructed sartorial waistbands featuring interior skirts and split backs to facilitate alterations, and suede trims on collars, elbows, and pockets.

“Brunello is more modern, but with a traditional twist,” explains Margaret Spaniolo, senior vice president and general merchandise manager for menswear at Bergdorf Goodman, which, in 2001, became the first U.S. retailer to offer the brand. “His color combinations are always very sophisticated and not commercial at all. I think someone who wants to feel confident that he looks good and dresses well without looking too far over the edge can always count on Brunello.”

In addition to Bergdorf Goodman, two freestanding Brunello Cucinelli stores in Manhattan and East Hampton stock the collection, as do Neiman Marcus, Saks Fifth Avenue, and Mitchells in Westport, Conn.

Although Cucinelli typically has his clothing’s sleeves and buttons sewn on by hand, most of his collection is made by machine in nearby Perugia, just a few blocks from the garage where he started his business, as a women’s-wear brand, in 1978. “Well-crafted doesn’t necessarily mean all by hand,” he says, “but made from high-quality raw materials and with great thought and care.”

When he launched his label, Cucinelli offered brightly colored cashmere knits, though brown, beige, and gray were the norm in luxury knitwear at the time. He added men’s knitwear six years later and, over time, introduced additional sportswear items, all of which displayed the sporty flair that has become characteristic of his clothing.

Fisherman peacoats, ski sweaters, hunting vests, stadium jackets, jogging pants, and equestrian-inspired trousers all figure prominently in his collection. Yet unlike conventional sporting gear, his pieces are made from cashmere, fine wool, and other fibers far too precious to wear while breaking a sweat—his knitted sweatshirts incorporate micro fancy jacquard designs. “It’s all about the illusion of sport,” Cucinelli says, noting that we all want to look active, even if we are only pushing buttons on remote controls.

Cucinelli, who plays soccer, says sport is a unifying theme in his collection because it connotes both physical and spiritual well-being. His interest in bringing a theater to Solomeo actually is tied to his belief in the benefit of sport—and to his goal of creating a better world. “In ancient Greece it was very common to practice sport and theater together,” he says. “In fact, a foro delle arti [arts forum] was a space where you could find a gymnasium, a theater, and a garden.” When Solomeo’s theater opens next fall, with all of those components, a cast will perform a yet-to-be-chosen work by Italian author Luca Ronconi. “It will be a place for entertainment, of course,” says Cucinelli. “But it should also be a gathering place where people go to reunite and discuss how together we can change the world.”