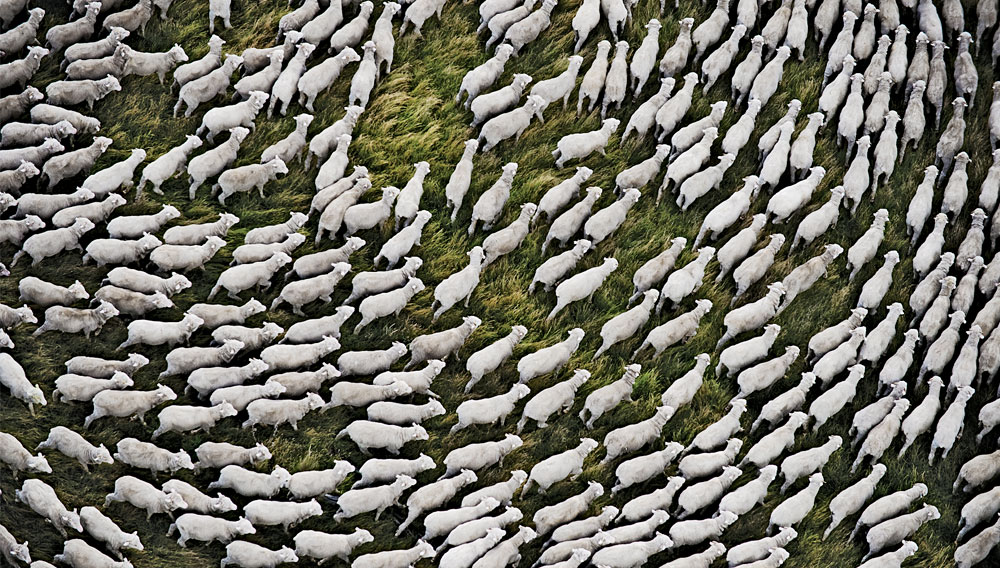 Weighing in at 50 pounds, about half of which is wool, Sharapova stands indifferent to an admiring crowd of international journalists. Named for the Russian tennis star, Sharapova is a prizewinning Australian merino sheep, and beneath her curly gray topcoat lies a snow-white fleece coveted for its silken texture and strong fiber. “It doesn’t feel real, does it?” asks Judith Blanch, a fifth-generation Australian woolgrower, as she pulls her hands through the flossy depths of the animal’s back.

Exceedingly rare fleeces such as Sharapova’s are the stock-in-trade of Blanch’s Westvale Farm, a century-old outfit located an hour’s flight north of Sydney in Australia’s Big Sky Country. On this blustery fall morning—sweater weather, indeed—the farm’s fertile emerald fields look like the English countryside, if it were dotted with eucalyptus trees. Blanch’s sheepdog lets out a bark that sends an entire flock scampering in unison, like a giant carpet floating over the damp earth.

Pampered creatures such as Blanch’s represent a mere 5 percent of the more than 75 million sheep in Australia. Descended from the original Spanish flocks brought to the continent in 1789 by John Macarthur, superfine sheep such as Westvale’s have been bred over the last three centuries to produce wool fibers that are less than 19.5 microns in diameter—well under a third the thickness of a human hair—and full of crimps, the miniature folds that indicate quality and elasticity. The more crimps, the better the fleece. And Westvale is known for its numbers.

The farm’s reputation attracted the attention of Paolo Zegna, the chairman of the Italian fashion and textile house Ermenegildo Zegna. Like generations of his family, Zegna comes to Australia to find the best raw material for his company’s impeccably tailored menswear. The Zegnas’ relationship with the Australian wool industry dates to the 1920s, when the company’s founder, Ermenegildo Zegna, began sourcing for his Lanificio Zegna textile mill in the Biella Alps north of Milan. The mill, in operation for more than a century, now produces more than 6.5 million feet of material annually, mostly for Zegna’s collections but also for Tom Ford, Yves Saint Laurent, and other designer labels. Most of the raw wool comes from elite growers in Australia. In 1963 the family created the annual Ermenegildo Zegna Extrafine Wool Trophy to honor these farms and challenge them to strive even higher.

In late April, to mark the 50th anniversary of the award, the company held a two-day event, flying some 200 members of the fashion industry and media to New South Wales and Sydney for a celebration of superpremium wool. An event like this, says Stuart McCullough, CEO of Australian Wool Innovation—a nonprofit association that supports nearly 29,000 of the country’s woolgrowers—“allows both sides to better connect from farm to fashion.”

later that morning, Sharapova is waiting in the shearing room, reclining almost cartoonishly on her back, supported by a pillow of wool. A previous grand champion at the Sydney Royal Easter Show, she produces wool in about the 13-micron range. Paolo Zegna picks up a pair of scissors that, with their foot-long steel blades, look more suited to trimming hedges than fleece. With the aid of the veteran sheepshearer Jim Murray, Zegna delicately cuts Sharapova’s fleece the way that sheep have been sheared for centuries (though electric shearing is more common today). Blanch and her husband, Leo, look on approvingly. “The whole family is involved,” Zegna says. “It is the same spirit in our factories, generation after generation.”

The shearing takes about five minutes, after which the entire cut fleece is bunched together and tossed onto an enormous antique wooden sorting table, where it unfurls into the shape of a sheepskin rug. Sharapova, looking naked, is returned to a pen with the other shorn sheep, and then everyone’s attention turns to the fleece. Any bits that have been stained by mud and rain are discarded; the rest are flung into separate bins for the back, the legs, and other sections of the sheep’s body. The best parts of the fleece—normally from the animal’s sides and shoulders—are reserved for making Zegna fabric. They are pressed into bales in an electric compressor, labeled with the farm’s logo, and shipped to Lanificio Zegna, where they will be spun and finished into fine fabric.

“We give a lot of credit to wool,” says Zegna, wiping his forehead and resting on one of the bales. The company uses fleeces with fibers less than 13 microns to weave its ultralight Vellus Aureum cloth for made-to-measure suits. But the high-end merino farms produce a limited quantity of such wool, and, as a result, Zegna makes only about 50 Vellus Aureum suits a year, each priced at $25,800 or more. The suits weigh only 7 ounces—less than a man’s shirt. They cannot be dry-cleaned and must be stored in temperature-controlled closets with consistent humidity. If the weather is humid, the suits shrink and expand, even if they do not get wet. But the texture is thrilling: It feels incredibly soft and pillowy. The material is so thin that it is nearly transparent, yet it has all the temperature-retaining properties for which wool is known.

“It’s like a Ferrari produced on the Formula 1 assembly line,” says Gildo Zegna, Paolo’s cousin and the company’s CEO. For each of the Vellus Aureum suits, Paolo writes a letter to the buyer, offering his gratitude and explaining the rarity of the garment. “Owning a suit made of this fabric,” Gildo says, “is like owning a vintage car or an old master.”

the next night, in Sydney, Ermenegildo Zegna is going to present 60 extraordinary suits on the runway as the centerpiece of its annual Wool Awards gala at the historic Royal Hall of Industries. Beneath the hall’s vaulted ceiling and cathedral windows, more than 1,000 revelers dine on wagyu-beef carpaccio, Peking duck pancakes, and other East-meets-West canapés. They wander through a multimedia exhibit, where images of the Lanificio Zegna mill are transposed with video of the Italian countryside. Then it is time for the main event.

Alas, it is not Westvale’s year. Windradeen Farm from Mudgee in New South Wales—the producer of a world-record 10-micron fleece in 2010—takes the Extrafine Wool Trophy, as well as Zegna’s Vellus Aureum Trophy, which is awarded for fleeces of less than 13.9 microns. Windradeen’s fleece measures 11.3 microns. Zegna will weave it into fabric for its finest suits.

As the house lights dim and the catwalk comes to life, the crowd falls to a hush. In the largest presentation in the company’s history, 60 models glide down the runway wearing suits from Zegna’s fall 2013 collection and from a special capsule collection created for the event—every suit made from Australian wool. It is easy to imagine them simply floating by, lighter than air.