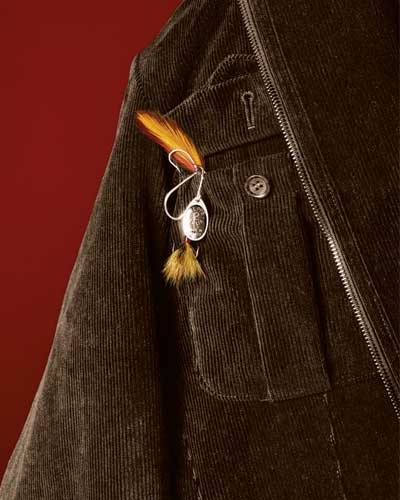 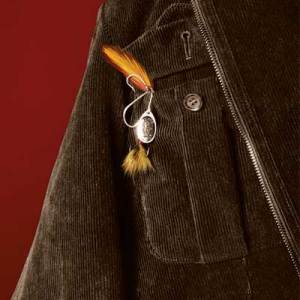 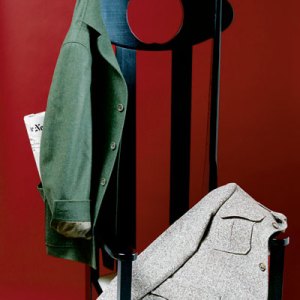 When Italian suitmaker Belvest introduced a new high-button sport coat with shirt-style cuffs, three roomy patch pockets, and an unusual oversize fourth pocket on the back, all but the most progressive clothing buyers dismissed the style as being too forward and avant-garde. However, the company’s Shark model, which debuted for fall, is actually a throwback.

A cross between a blazer and a coat, the jacket is a modified version of early 20th-century field coats that were made from durable, weather-tight cloth and styled with several pockets to accommodate sporting as well as military uses. “The inspiration was taken from a piece we found in a vintage clothing shop,” explains Roberta Cocco, Belvest’s U.S. president, who notes that the design was named for the original’s wool sharkskin material. “It has a retro sensibility, but at the same time is also a very modern weekend jacket, particularly with the pocket on the backside, which can hold gloves or perhaps a newspaper.”

The original field jacket from which Belvest took its creative license was itself a hybrid of a hunting jacket and a Norfolk suit, which dates to the early 18th century and was distinguished by a box-pleated, belted jacket. Norfolk jackets were traditionally made of wools patterned with checks that identified the district of the wearer’s country home. The pouch in back was larger, with an opening on both sides for storing game caught during an afternoon hunt.

While Belvest’s designers are aware that there is little need for a game pouch on contemporary tailored clothing, the 40-year-old company has built its reputation as one of Italy’s most progressive suitmakers by taking such fashion risks and by developing new shapes, including its unconstructed Jacket in a Box and, more recently, its multipocketed travel jacket. In each case, the motivation was the same: to push the slow-to-change menswear market forward. As classic styling dominates the tailored clothing market, some manufacturers are expressing their creativity with fashionable alternatives to the traditional suit, seeking design inspiration in museums, old magazines, and vintage clothing shops.

Brioni, Gianluca Isaia, Vestimenta, Brunello Cucinelli, Ralph Lauren, and Luciano Barbera offer their own field jacket variations, which range from luxurious to leisurely. Italian sportswear maker Brunello Cucinelli’s interpretation, made of sumptuous donegal cashmere, is one of the most elegant. Vestimenta’s variation, by contrast, is made of cotton corduroy, nylon, wool flannel, and other sturdy fabrics, rendering it less precious but no less versatile.

“The inspiration for this jacket was to take a classic hunting jacket and modernize it,” says Vestimenta designer Nicola Del Verme, who found the hunting jacket design in a vintage magazine. “Although it has a lapel and buttons like a jacket, it also has a zipper running up the lapel so it can close like an outerwear piece.” Despite the jacket’s retro styling, adds Del Verme, he and his Italian design team used modern tailoring techniques to give it a contemporary trim fit.

Such updated versatility is fundamental to the new field jacket’s appeal. Designer and men’s fashion historian Alan Flusser views these coats as the fashion equivalent of the sport-utility vehicle, which has displaced the station wagon as the family car because it is more functional and therefore more practical for people with active lifestyles. “Function is part of the lure of sport-utility design,” says Flusser. In the case of fashion, “it is about pushing garments past their normal identifications,” he says. As an example he cites old barber jackets, which were essentially fisherman’s jackets that fashionable people began wearing as raincoats a few years back. “There is always a desire to tap into something that feels and looks authentic. This new jacket is one of the few garments that allows for a tremendous amount of detail and versatility, which is a rarity in men’s clothes.”

Some of these coats are clearly permutations of the multifunctional travel jacket that suitmakers have been pushing for several seasons now. However, instead of including practical features such as wrinkle- and water-repellent fabrics, and unlike coats that fold into travel pillows and blazers that transform into trench coats, the field jacket emphasizes comfort and convenience—we can all use a few extra pockets. Other design features—such as back pouch pockets, belted backs, and leather-trimmed collars—are related more to fashion than function. Most important, these jackets are easy to work into a daily wardrobe.

“I think of them as a travel jacket or an everyday jacket because of their softness and relaxed nature,” says Scott Hill, whose Scott & Co. store in Los Angeles offers several variations on the field jacket, including Belvest’s Shark. “We bought them in washed corduroy, wool/cashmere, and pure cashmere to wear like soft cardigans, mostly because the sartorial market is moving toward more structure and roped shoulders, and there are a lot of guys, especially in California, who don’t have the need to wear a suit in that way.” Like the travel jackets that preceded them, Hill says, most of these new field coats can be folded for storage and have inside zip pockets to hold passports. Some even have inside tabs that can be used for holding a newspaper in place. However, he adds, their real versatility lies in their ability to be worn with a tie for casual business meetings or dressed down with an untucked shirt and a pair of jeans.

Although it is difficult to picture the dapper Italian designer Luciano Barbera donning a pair of dungarees, he understands the need for garments that straddle the line between tailored clothing and sportswear. He has designed a four-pocket, three-quarter-length field jacket that is fashioned from soft and lightweight weathered goatskin and has a lining made of Prince of Wales wool—a fabric typically used for suits—to remind the wearer of the coat’s tailored origins.

“Luciano’s idea is to dress up the sportswear and dress down the suits,” says Michael Sestak, Barbera’s U.S. sales agent. “The beauty of a piece like this is that it has very classic, elegant elements, but it can also be very young and modern, which appeals to a large audience of men.” Sestak also points out that the coat stands out from others because it is made of leather, while incorporating zip and bellows pockets that make it functional for travel. “Then there’s another contrast between the leather, which makes it very rugged looking, and the very classic Prince of Wales, Saxony-like fabric,” he adds.

Mario Bisio of Mario’s in Portland, Ore., is one of the retailers offering Barbera’s field coat, among others. “A man always has to anchor his look with a jacket, and that leaves a lot of room for interpretation,” explains Bisio. “So you’re always going to see a lot of these alternative jackets, especially during the fall. It’s a very sophisticated, masculine jacket so it appeals to a more mature guy, a younger fashion customer, and a leather outerwear junkie.” At the same time, he says, unlike a suit that typically has a single purpose, the new field jackets can fulfill the functions of a cardigan, a blazer, and a coat.

“Everyone is calling this the new sport jacket, which is kind of amusing, because when these jackets were first designed they were really intended for sport,” explains fashion historian Flusser. “They were digressions from suits and therefore called sport jackets.”

The irony is that today, men are more likely to wear the new field jackets to complement a tie rather than to hunt or fish. Yet, these relaxed multipocketed tailored blazers do serve a vital purpose in a wardrobe. “The jackets we’re talking about today are driven by function,” says Flusser. “We all lead multitasking lives now and need multitasking clothes that are comfortable to wear and at the same time serve more than just the given purpose.”