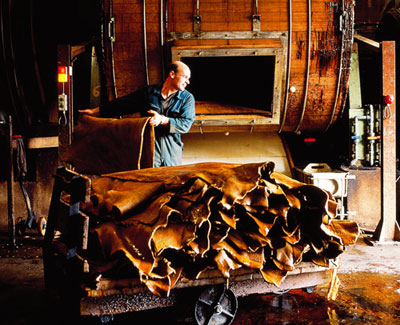 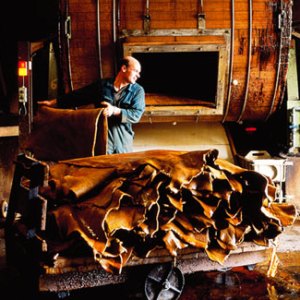 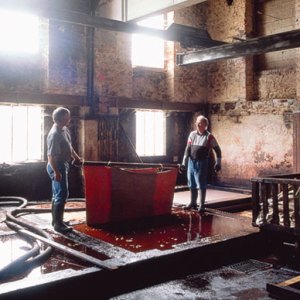 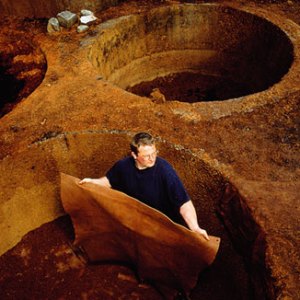 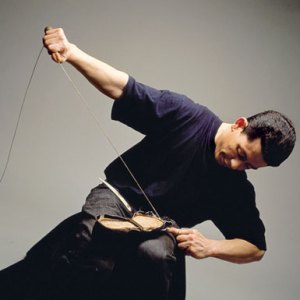 The stench of death lingers inside a series of stone buildings that were built during the French Revolution just outside of Saint-Léonard-de-Noblat in the heart of the French countryside. Here, in this lush green valley dotted with picturesque cottages, Bastin et Frères tannery, better known as Tannerie Bastin, has converted a former military supply factory into a makeshift warehouse, where the hides of slaughtered cattle are kept fresh with cool air and sea salts. The pungent hides, many still covered with fur and dried blood, will sit in this cavernous storage facility for weeks until Michel Desparrains and his small staff load them one pallet at a time into a foulon, or washing machine, the height of a two-story building. Eventually, they fill the massive drum with countless gallons of water, detergent, and bleach to remove the greasy texture, neutralize the hides’ colors, and open the pores so the fur can easily be removed later.

The space in which this industrial laundry session takes place is known as the “river works” room, because for more than a century this process was performed in the nearby Vienne River. Tannerie Bastin, one of the last remaining tanneries in the beautiful Limousin region of France, moved the operation indoors in 1850, about a century before the firm was purchased by its largest customer: French footwear giant J.M. Weston. The acquisition gave Weston the ability to form a completely vertical operation that integrates the entire process—from tanning the hides and cutting the soles to building the finished product and selling it in the company’s signature stores. Owning its own tannery also gives Weston complete control over the quality of the leather used for its shoes, belts, and, beginning this winter, a new collection of business and travel bags.

Tanning—not to be confused with color dyeing after the shoe has been made—is the art of turning raw animal hides into leather. A century ago, dozens of French tanneries performed this service in and around Saint-Léonard-de-Noblat and nearby Limoges, areas selected for the abundance of three key elements: cattle, water, and oak and chestnut trees (the barks of which are used for dyeing and treating the hides). However, the proliferation of industrial leather production and the depletion of livestock in the area have gradually decimated this once-prosperous artisan industry.

Founded in 1790, Tannerie Bastin persists as a throwback to another era, primarily because Weston is bent on retaining the firm’s Old World tanning methods. To that end, nearly 60 percent of the leather produced here is taken from the thickest portions of the hides—the backs and necks—and used for soles. Using fewer thick layers in sole construction results in shoes that have greater longevity than shoes with soles made from several thin layers. “We put so much effort into the sole, because it is like the engine of a car,” says Bruno François, Weston’s amiable president of U.S. operations. “You cannot put too much work into it.”

A visit to the tannery may shock those familiar only with the company’s signature store on the Champs-Elysées in Paris or its American flagship store on New York’s Madison Avenue. The facility is thick with the stale odors of standing water, rotting tree bark, and 24 tons of raw animal hides. Cleaning tempers the aroma, but following the arduous multiphase tanning process still requires an iron stomach.

After washing, the spongy hides are hand-strung hundreds at a time from metal rods suspended over sunken vats of murky brown water filled with oak and chestnut tree bark. Over a period of several weeks, the hides are repeatedly dipped and dried in assembly-line fashion, moving from one swamplike vat to another, each a little bit darker than the previous, until the wood chip residue impregnates the leather, giving it color as well as durability and rigid-ity. Fine-quality tanneries such as Weston use the tannins from tree bark, not chemical dyes, to transform the hides from their original milky complexion to the “natural” buff color associated with leather. In fact, in the industry, skins can be called leather only after they have gone through the tanning process.

Converting calves’ hides, which are by-products of the food industry, to luxurious leather is a particularly expensive operation largely because of the time and labor involved in selecting unblemished hides—an art in itself—and because of the optimal yearlong production cycle. Tannerie Bastin continues to dry its leathers the way it has done since the late 18th century: in large, cylindrical, open-air pits in which the leathers are stacked 500 deep with layers of shredded oak bark separating the skins. They are left there to dry naturally for as long as a year. Most commercial tanneries, on the other hand, often cut corners to minimize costs and remain competitive, usually by employing machinery or chemicals to accelerate the eight- to 12-month drying process, sometimes shortening the final and most important step to just two weeks.

“The key to tanning is finishing and stabilizing the skin,” explains Patrick Rodier, Weston’s production manager. “If you accelerate the drying process the way most do, the leather will deteriorate more quickly, and the finished shoe will scratch easier.”

Rodier insists that Westons are built to withstand the test of time. For proof, one need only visit the firm’s manufacturing facility in nearby Limoges, a city known more for porcelain despite its rich history in leather and shoemaking. Here, an entire wing of Weston’s massive industrial building is dedicated to the rewelting and reconditioning of used Weston footwear, some worn for more than 50 years. “If the leather upper has not been damaged,” explains François, “the shoes can be repaired to look good as new.”

To accomplish this task, Weston employs century-old Goodyear welting technology in which a half-inch leather wall, or flap, is made by cutting into the upper layer of the sole and peeling the layer upward. This wall is the piece onto which the shoemaker stitches the upper. Most shoemakers create this wall by gluing another piece of leather or even canvas onto the thin upper layer of the sole. Weston’s use of a thick upper layer allows the shoemaker to cut directly into the sole to create the wall. According to François, the difference is that when Weston rebuilds the shoe, it can replace the stitching on the original first layer of the inner sole where the foot has been imprinted, which will retain the shoe’s well-worn comfort. “If you have to rebuild that first layer by creating a new wall, you might as well just buy another pair of shoes,” he says. Americans have been slow to take advantage of this approximately $200 service (available at Weston stores as well as through retailers such as Wilkes Bashford in San Francisco); however, in France, the company regularly reconditions as many as 1,000 pairs every month.

Such special services as well as its exclusive traditional tanning methods have earned Weston surprisingly strong name recognition for a relatively small brand that is available at only about a dozen U.S. stores, including Weston’s signature shop in New York. “We’ve been carrying Weston for two years, and our customers already knew about it before then,” says Denver retailer Lawrence Covell. “It’s a classic European shoe that serves a broad range of our customers, especially a conservative guy who wants a good, comfortable pair of shoes.”

For those unfamiliar with the label, Weston was founded by French shoemaker Edouard Blanchard in 1891 under the name Blanchard. His son, Eugène, adopted the company’s fictitious name J.M. Weston in 1919 after spending a year studying with some of America’s best shoemakers, most of them located in and around Weston, Mass., which is now one of Boston’s most affluent suburbs. No one knows the origins of the “J.M.,” although company executives spec-ulate that it is a phonetic adaptation of j’aime, which means “I like” in French.

When young Blanchard passed away without heirs in 1955, the company fell into the hands of a financial trust, was acquired in 1976 by French financier Jean-Louis Descours, whose goal was to broaden the brand’s distribution beyond France and expand its fashion and made-to-measure shoe businesses. The company now has 25 signature shops worldwide and is run by Descours’ 29-year-old grandson, Jean-Christopher Descours.

The younger Descours recently installed women’s shoe designer Michel Perry to give the classic French shoe label some international fashion flair. Though Perry is known for his women’s footwear, especially his creations for Jean-Paul Gaultier Couture, Descours says Perry was a natural choice because he designs his own lasts and has extensive knowledge about fit. “Because of his experience in working with leather, his familiarity with the world of bootmaking, and his constant striving for technical rigor, Perry speaks the same language as the master craftsmen at Weston,” says Descours.

Perry is easing J.M. Weston forward by returning to the company’s past—a lesson he learned from time spent at Tannerie Bastin. “The new line is going to [reflect] shoemaking from the beginning of the last century,” he explains. “But I have altered the lasts on many of the old designs—classic cap toes, wing tips, and lace-up boots—to make them fit more comfortably.”

What will never change, he says, is the age-old method of construction and uncompromising commitment to top quality. “Owning our own tannery is crucial because it allows us to use only the center part of the hide, which is the thickest and most expensive,” says Perry. “You don’t see the benefit of this initially. But after you have worn the shoes for six months and realize the leather has not been scratched or worn out, it all becomes perfectly clear.”

François also emphasizes that what truly distinguishes J.M. Weston from other shoemakers is not readily apparent. “Most shoemakers find good sources for each stage of production, but they don’t control it all themselves,” he says. “When you integrate everything from the tanning to the finished shoe, how-ever, you know exactly what you put into the product. It is the foundation of the shoe—what is not visible—that really sets us apart.”