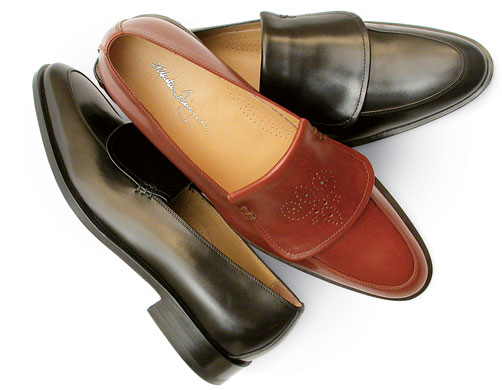 If understated black and brown foot-wear seems too staid for spring, the season to be a bit more daring in one’s manner of dress, take heart: Makers of the finest shoes are offering ample opportunities to step out on a limb—in supersoft suede driving shoes and sport sneakers in tropical colors, suede moccasins featuring innovative flexible soles, and two-tone leather spectators. Also prominent are leather flip-flops and sandals adorned with decorative hardware, sleek woven leather loafers, pointy-toed slip-ons, and white bucks, which were once confined to Ivy League campuses and Hamptons cocktail parties. Even clunky cap-toe, wingtip, and Balmoral dress styles—the kind Wall Street brokers and Fleet Street bankers have worn for decades—have been pared down with thinner heels and, in some cases, comfortable rubberized soles. Many of the season’s most notable styles also have been rendered in exotic skins, including alligator, ostrich, and lizard, or given a burnished antique finish.

“It’s the look and feel of a 1950s aristocratic summer in the South of France or the suave Italian style of La Dolce Vita,” explains shoe designer Michael Toschi. A perusal of the shoe department at Saks Fifth Avenue supports Toschi’s observation. Here, the fashion themes reflect life in an exclusive seaside haven. “Saint-Tropez is the saturated Mediterranean colors tempered with a lot of white,” explains Saks men’s fashion director Michael Macko, “while Palm Beach is more classic Americana, very preppy looks. Think the Kennedys on the sand in Palm Beach, not at Hyannis Port.”

Shoemakers refer to this relaxed yet refined style as “casual glamour,” a look that can be achieved by accenting jeans with a pair of Silvano Lattanzi’s colorful and dressy exotic-skin loafers adorned with nail heads and other metal hardware—a design element traceable to ancient Roman and Greek footwear. Another take on this seemingly contradictory concept would involve pairing one of this season’s unconstructed cotton suits with Cole Haan’s lizard-skin sandals or thongs.

“It’s definitely the season for the thong,” says Cole Haan creative director Gordon Thompson, whose latest collection of sandals, woven slip-ons, classic white bucks, and flip-flops was influenced by designs he encountered while touring the French Riviera. His flip-flops are not the dime-store variety, stresses Thompson, but rather a wide-banded interpretation in vegetable-tanned leather or exotic reptile skins with decorative topstitching. “It gives the foot plenty of coverage,” he says.

Thompson is not alone in incorporating unusual leather treatments in his designs. “We’re seeing tons of crocodile, ostrich, lizard,” says Saks’ Macko. “That’s probably the number one trend in men’s footwear. You can be a little more aggressive with Prada, which mixed purple ostrich with green lizard on slides, or you can wear a classic lace-up done in a beautiful brown ostrich skin by Zegna.”

A subtler alternative would involve a dress shoe with a sport element. Allen-Edmonds, the conservative Wisconsin company, is perforating the toes of its dress shoes to mimic the lines of a bowling or bicycle shoe. Barrett’s new Marathon loafers are distinguished by bold colors and rubber soles. Martin Dingman has taken half-boots and boat shoes made of alligator and outfitted them with rubber soles, and Ferragamo is using thin rubber bottoms on many of its dress loafers. “These are more contemporary, sleek-looking shoes with narrower toes,” says Ferragamo footwear vice president Brett Schenck. “They are shoes a gentleman can wear with anything from a suit to more casual sportswear.” Ferragamo shoemakers carve cavities into the leather soles to accommodate the rubber, allowing the shoes to maintain the Florentine brand’s signature thin-soled appearance. The company’s true dress footwear, he says, exhibits narrower silhouettes and thinner, pointier toes.

J.M. Weston designer Michel Perry has been streamlining men’s footwear for several seasons, most recently for his new Bagatelle collection. “We are coming out with a style that is a very thin, dandy look that a man could wear to cocktail hour,” explains Jean Christopher Descours, chief executive of the French shoemaker. Although the retro two-tone wingtips and simple lace-ups with toes that are perforated with a rose motif conform to the long and narrow shape, they also have a slightly curved toe for comfort.

Likewise, Martin Dingman’s footwear is distinguished by a slightly pointed toe, a style now popular in the United States and abroad. “I determined a long time ago that if the Duke of Windsor or Prince Charles wouldn’t consider it, it doesn’t belong in my collection,” says Dingman, whose favorite shoe of the season is a simple leather loafer adorned with an apron, or kilty, similar to those found on golf shoes.

The sleeker silhouette with a rounded toe also is taking hold at Hermès-owned John Lobb, says Paul Goring, North American director of sales. The leaner shape is certainly noticeable, he says, but more important is the use of thinner-skinned leathers and lighter sole and heel designs to reduce weight and enhance walking comfort.

As they seek to change the shape of footwear, designers also are presenting the option to experiment with strong colors. “You’ll still find the usual black, brown, and burgundy,” says Tony De Falco, vice president of the Italian shoe brand Moreschi. “But spring is really the time to introduce more unusual shades,” including Mediterranean hues such as sky blue, turquoise, coral, and sunny yellow for casual moccasins, driving shoes, and boat shoes. Those not ready to make the leap from brown to blue should “think white, white, and more white,” says designer Toschi, whose advice is echoed by other shoemakers, including Ferragamo, Tods, and John Varvatos.

The present take on white is nothing like the Miami Beach image of white pants, white shoes, white shirt, and a big Gucci belt buckle, says Gene Brown, the U.S. president of the Italian shoe house Santoni. Although white shoes clearly are not for everyone, Brown points out that they can be sophisticated accompaniments to the season’s linen, cotton, silk, and seersucker suits and slacks. “It’s elegant,” he says, “like something you might see in Capri.”