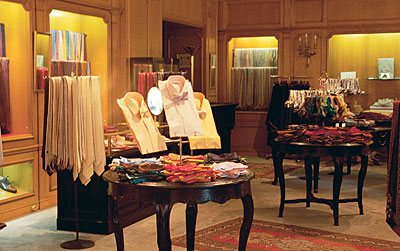 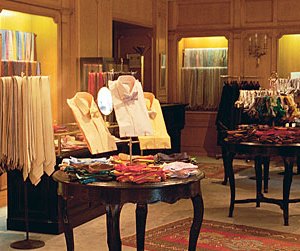 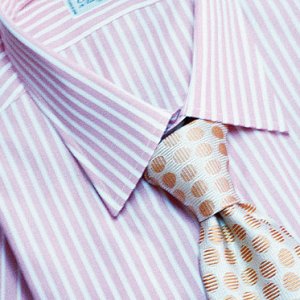 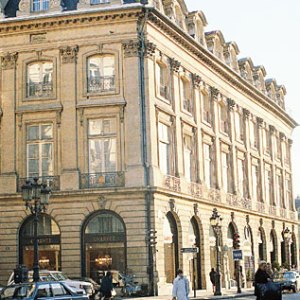 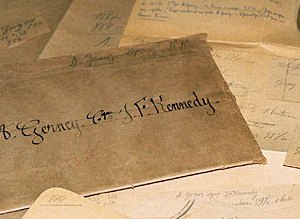 w. somerset maugham’s 1944 novel The Razor’s Edge, one of the principal characters, Elliott Templeton, exits Paris’ Ritz Hotel and crosses the Place Vendôme to a store called Charvet. Inside the luxurious menswear shop, he collects a pair of bespoke underwear made of silk and emblazoned with an intricately embroidered monogram of his initials coiled around the coronet of a count, a title that had been bestowed upon the expatriate Virginian by the pope.

Maugham, who was born in Paris, may well have had one of his own shopping excursions to the venerable French haberdasher in mind when he penned the scene in his story, which draws a stark contrast between the elitist American connoisseur and Larry Darrell, the protagonist in search of spiritual enlightenment. In his novel, however, the author fails to acknowledge that appreciating fine menswear and spiritual edification are not necessarily mutually exclusive at Charvet.

Established as the first shirt shop in France by Christophe Charvet in 1838, Charvet had been a European fashion destination for more than 100 years before Maugham introduced it to the masses. For generations, men who worship single-needle stitching and precision pattern matches have found Nirvana at the shop, with its gigantic selection of crisp cottons tailored with an artisan’s eye for detail.

Most Americans’ knowledge of Charvet is limited to the company’s ready-made and demi-measure (customized) shirts and ties, which are available at Bergdorf Goodman, Saks Fifth Avenue, Neiman Marcus, and Stanley Korshak. But the company also offers true bespoke service, though you have to journey to its Parisian headquarters to experience it. Unlike many premier European clothing makers, which stage seasonal trunk shows in the United States, Charvet does not offer custom service anywhere outside of France. But if you make the trip, you will find that Charvet’s custom offerings go well beyond its shirts.

From neckties, ascots, pocket squares, slippers, pajamas, and nightshirts to knitwear, suits, and yes, even underwear, “Everything in the shop can be custom ordered or customized,” says Anne-Marie Colban, who operates the family-owned business with her brother, Jean-Claude. Among the most popular requests, she says, are robes made of silk tie fabrics embellished with silk fringe, and smoking jackets cut from velvet or wool/cashmere suit cloth. The custom suits, which the company quietly has been making on the fifth floor of its seven-story edifice for the past 30 years, start at $4,000 for Super 100 wool and can run into five figures, depending on the cloth and details.

“We don’t have a specific shoulder style like the Italians,” Colban says of the suits, adding that the company’s two full-time tailors are equally adept at producing natural-shouldered garments for younger gentlemen or traditionally tailored heavy flannel and Prince of Wales plaid suits like those found on Savile Row. If a client is taller than 6 feet 2 inches and wants to complement his suit with a tie, the staff always suggests custom, because a standard 57-inch ready-made tie will come up short.

Despite its diversification, says Colban, Charvet remains best known for its custom shirts, and upon exiting the plushly carpeted elevator onto the cavernous second floor, you understand why. More than 5,000 varieties of cotton fabrics are “piled to head height and taking up an area as big as a millionaire’s billiard room,” as Peter Mayle described in his 1991 book Expensive Habits. Amid the silence and the kaleidoscope of pastel colors, the regimental stripes, and the walls of white, the search for the perfect fabric for a new shirt or pajamas can become a spiritual odyssey. “Men really like to come into this room by themselves,” says the petite, soft-spoken Colban. “They can spend an hour or more just going through the fabrics. It’s really a moment for them.”Indeed, time comes to a virtual standstill for a fashion devotee immersed in this paradise overflowing with crisp, clean cloths: French, Swiss, and Italian silks; Sea Island and Egyptian cotton broadcloths and twills; royal oxfords and poplins; gabardines, denims, and chambrays; voiles, Irish linens, and even Chantilly lace.

While most custom shirtmakers present samples of their fabrics on 4-inch-square swatch cards, Charvet stacks its cloths in full bolts to reduce the guesswork involved with envisioning the final garment. “One needs to see how some patterns look when they are enlarged, how certain colors look next to the skin, and especially how the fabric drapes,” explains Colban. Charvet’s inventory includes thousands of color variations—400 shades of white alone—and 100 new stripes and checks are added each season. Considering the range of material options, it is understandable why it offers custom shirts and other bespoke services only on site.

However, the variety of fabrics and colors is not all that distinguishes Charvet from other prominent shirtmakers. Just as significant are the company’s trademark cut and other design nuances that its founder adapted and, in some cases, invented. Christophe Charvet is credited with creating the first shirt with permanently attached collar and cuffs. Before Charvet’s design breakthrough, a gentleman laundered only the removable cuffs and collar (stress areas that rub against the skin) on a regular basis.

Charvet’s custom-made shirts, priced from $400 for cottons to $900 for silks, require as many as 18 measurements and two full fittings to produce a prototype made of heavy poplin that will ensure a proper fit. Most bespoke shirtmakers take tape measurements and make the finished shirts without first sampling the cut on the customer’s body. Charvet also sketches the pattern, which is pinned to the fabric, and hand-cuts the material. It performs these procedures on the premises, an additional departure from competitors, who conduct the same operations in a remote factory. Charvet then forwards the pieces to its tiny factory in nearby Saint-Gaultier in France’s Loire Valley, where a single craftsman trained for a minimum of four years assembles and sews the shirt by machine. Unlike premier Italian brands such as Kiton, Borrelli, and Finamore, which wax poetic about the amount of handwork used to produce their shirts, Charvet makes only custom buttonholes by hand, preferring the control and precision of machinery for other procedures. As Colban wryly notes, irregular stitching may be appealing to some, but “it is not the French way.”

Distinctly French or not, Charvet’s construction process is unique. For example, on its hallmark striped shirts, each line flows continuously along the shoulders, yoke, and sleeve to the cuff, where three small pleats ensure that the sleeve lies flat. Buttons are made from Australian mother-of-pearl cut from the surface of the oyster shell for added strength and greater color clarity, rather than from the commonly used and more fragile center. Unless otherwise specified, Charvet collars are always half-spread with sharp points and made from six layers of unfused cloth for a dressy, yet not stiff, appearance. Shirttails are cut longer, square-shaped, and vented, a proprietary detail that allows the shirt to cling to the body when the wearer stands and to relax when he sits.

Even Charvet’s ready-made shirts, which are priced from $250 and constructed in assembly-line fashion by six seamstresses, have distinctive features that include a one-piece curved yoke cut to the shape of the back, buttonhole yarns color-matched exactly to stripes, and a one-quarter-inch wider opening on the left cuff to accommodate a watch. The firm’s demi-measure construction—which combines ready-made and custom-made features at a cost that is about 20 percent less than full custom—is comparable to what some competing shirtmakers refer to as custom. In this line, Charvet cuts the body of the shirt from a preexisting pattern, while tailoring the sleeves and collar to individual specifications.

“Our Charvet customers are often repeat customers because the construction is so good,” says Bart Triggs, men’s furnishings buyer at Dallas’ Stanley Korshak, where Charvet is among the store’s most popular shirt brands. “[Charvet] pays very close attention to the details—such as the placement and heavier lining of the collar, and a placket facing that is a little heavier than most Italian- and American-made shirts.” Charvet ties are equally in demand, adds Triggs, noting the popularity of a striped fabric that shimmers and changes colors. “It’s really an ombré effect, but it has become so synonymous with the company that we call it the Charvet effect.”Charvet does not confine such attention to detail to shirt and tie making. On the second floor of the Paris headquarters, tucked behind shelves of cloth and pattern-making tables, is a small private room and archive devoted to monogramming. “We can create very special monograms here, but we have to be extremely careful, because the price of some monograms can easily become more than the price of the shirts,” explains Colban, as she shows off the elaborate embroideries created for noteworthy clients such as John F. Kennedy (who had the labels of his Charvet shirts removed), King Edward VII, Marcel Proust, Edouard Manet, Gary Cooper, and Charles de Gaulle.

While Charvet catered to many of the past century’s most distinguished men, few took as much interest in the label as did de Gaulle. In the early 1960s, upon realizing that various factions of the Charvet family were financially strapped and divided in their commitment to preserving the family business, de Gaulle confided this information to one of Charvet’s fabric suppliers, Denis Colban, who at the time served as an adviser to France’s trade minister. Of the five most prominent French shirtmakers of the 20th century—Bouvin, Charvet, Poirier, Seelio, and Seymous—all but Charvet had closed their doors. Fearing that his favorite men’s store was facing a similar fate, or worse, that it would fall into the hands of American investors, de Gaulle suggested that a local buyer be found to keep the business operating as a French company on French soil. Colban saw it as his patriotic duty to buy the brand himself, which he did in 1963.

“My father re-created Charvet,” says Colban, explaining how, in 1981, he moved the shop from 8 to 28 Place Vendôme and expanded the company both in terms of size and product diversification. He was also unyielding when it came to maintaining Charvet’s craftsmanship and reputation, refusing numerous offers to sell the company to a conglomerate or dilute the exclusivity of the brand by opening stores around the world.

“With 50 shirtmakers, we have very limited production capabilities,” says Colban, noting that to add more tailors would hamper the company’s ability to maintain quality control. Despite such self-imposed production limitations, Charvet has earned brand recognition and an illustrious reputation that extends well beyond French borders. In fact, about a third of its sales are attributed to the American market, where premier retailers have introduced their customers to the company’s ready-made shirts and ties. But once a man ventures into the flagship Paris store, says Colban, “he’s a bespoke customer for life.”