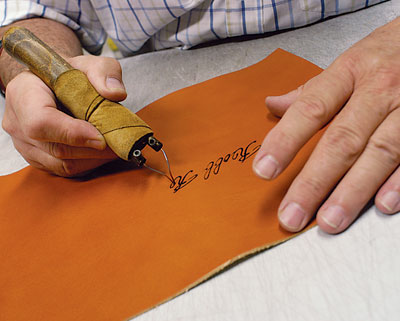 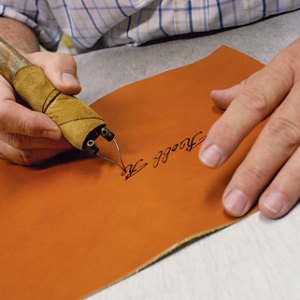 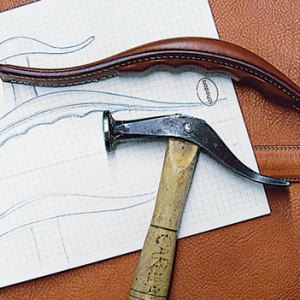 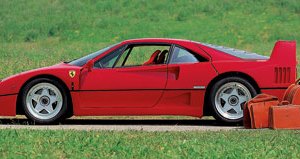 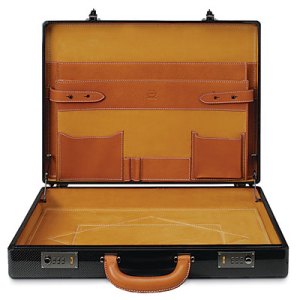 Simone Schedoni has firsthand experience with the fanaticism that Ferraris can engender. In his family’s Schedoni leather-goods factory in Modena, Italy (which is also home to the prancing-horse marque), a piece of stained, sueded pigskin is framed under glass and on display. The leather was removed from the driver’s seat of the Ferrari that Michael Schumacher drove to win the Spanish Grand Prix in 1996, his first of many victories for the Italian carmaker. The keepsake bears the driver’s signature—and his perspiration, which has tarnished the pelt.

“During a race, the driver has to wear a fire-retardant suit that is very hot,” explains Schedoni, vice president of the company that has been producing Formula One car seat covers for more than two decades. “Because of this and the heat from the engine, during each race, he loses about three pounds of perspiration, which permeates the suit and is absorbed into the suede. It’s a huge quantity, so the seat covers have to be changed after two, maximum three races.”

The Schumacher seat cover is one of nearly 100 signed originals that Schedoni has collected from a roster of Formula One Ferrari drivers that, in addition to Schumacher, includes Nigel Mansell, Alain Prost, and Jean Alesi. The Ferraristi consider this peculiar collection so valuable that one of them, a Japanese real estate developer, presented Schedoni with a blank check to buy the entire lot. “This man has about 30 Ferraris, including four 250 GTOs that are worth about $12 million each,” says Schedoni, noting that the collector even commissioned his own tombstone in the shape of a Ferrari. “He told me to fill in any amount I wanted.”

Schedoni resisted the temptation, because the collection testifies to his family’s long-standing link to Formula One racing. The company’s Ferrari alliance began in 1976 when Simone’s father, Mauro, created a set of luggage to fit in the trunk of his brother-in-law Franco Folli’s Ferrari 308 GTB. Folli’s close friend, a Ferrari sales manager, was so impressed by Schedoni’s work that he arranged a meeting between Schedoni and Enzo Ferrari. When Ferrari saw the suitcases—a set so detailed and precisely engineered that it fit in the trunk only when the handles were placed in a certain position—he hired Schedoni to craft for his fleet custom luggage, document pouches, tool kit cases, and even some leather interiors. In 1983, Schedoni began working with Gestione Sportiva Ferrari, which manages Ferrari’s Formula One racing team, producing seat covers for its racecar drivers. Schedoni’s Ferrari partnership soon led to additional luggage and leather-goods commissions from Audi, Lamborghini, Maserati, Pagani Zonda, and, most recently, Bentley, for its Arnage Drophead Coupe.

Because Schedoni leather goods traditionally have sold under the individual carmakers’ names, the brand had remained obscure, despite a history that dates to 1880, when the company was established as a shoe manufacturer. Simone’s father and grandfather both were shoemakers, but in the 1970s, Mauro expanded the factory’s production from footwear to a full line of leather goods. When Simone took over the day-to-day operation of the business five years ago, he launched the company’s first branded collection, and three years ago, Schedoni opened its first retail store, at Merrick Park in Coral Gables, Fla. A second store opened last year in Abu Dhabi, and a third is scheduled to open in November at the Hilton Plaza in Osaka, Japan. Additionally, the company has signed deals for in-store shops in Harrods in London, Isetan in Tokyo, and St. James in Moscow, among others. “We like to say we are a brand-new company with 125 years of manufacturing experience,” says Schedoni, whose current offerings span from luggage, briefcases, wallets, belts, and toiletry kits to recreational leather goods such as golf bags and backgammon sets.

While its association with the auto world was a blessing for the company, it also inhibited its growth. For nearly three decades, says Schedoni, Ferrari had usurped virtually all of its production capacity. In addition, such exclusive products had a limited audience. “We do luggage for the owners of the cars, not the fans,” he adds.

Still, it was Schedoni’s exceptional quality and design nuances that caught Enzo’s eye in the first place. The cowhides used to produce Schedoni bags, for example, come from Brittany, a region of France known for butter production. The animals are kept indoors and fed a high-fat diet that makes the skins exceptionally soft. Schedoni then selects skins from only the shoulder area, because it does not make contact with walls and sharp objects that can cause scarring. The skins are tanned in Tuscany in old-fashioned wooden drums filled with vegetable oil to retain the leather’s suppleness and reduce blemishes that can develop from contact with metal. More recently, the company began working with ostrich, crocodile, python, iguana, and other exotic skins.

Schedoni exercises even greater diligence with the design and production details. The distinctive shape of the handle found on most Schedoni bags and briefcases emulates the bowed design of a cobbler’s hammer, a subtle reference to the company’s shoemaking heritage. Using an oversize machine that enables the craftsmen to sew sideways and in circles, they produce the company’s characteristic contrast stitching with one continuous thread, which makes the piece stronger and less likely to separate at the seams. Most manufacturers sew their luggage in separate pieces and then join them by hand to form a complete case. Many Schedoni products also incorporate heavy woven nylon thread—the same thread that fine shoemakers use—because of its strength. “You can pull a car with a piece of this thread,” says Simone, who also uses the thread to embellish the company’s hand-sewn catalogs.

Design details culled from Schedoni’s Formula One experience also are evident in the collection. One $4,400 suede-lined briefcase is made of resinated carbon fiber, the same material used for the bodies of Formula One racecars. Schedoni can produce no more than two or three of these cases per week, because of the complexity of working with the carbon-fiber material, which must be dipped in resin, set in a mold, and vacuum-sealed inside a kilnlike oven for 12 hours. Shifting is not uncommon during the vacuum process, which can result in wrinkles and inconsistencies; the majority of cases never make it off the factory floor. “It’s not like leather, where you can see the flaws while you’re working with it,” explains Schedoni, who also uses the carbon-fiber cases for $5,800 backgammon sets that include titanium game pieces.

Schedoni’s product line includes more obscure collectible items, such as pencil holders made from Formula One engine cylinder liners and wrapped in leather. The company also manufactured 100 book boxes to hold limited edition copies of Chris Nixon’s book Rivals: Aston Martin & Ferrari Races from 1957–1959. Schedoni made the box from riveted aluminum to emulate a Ferrari fuel tank and trimmed it in leather with sterling silver clasps.

Schedoni’s diversity and technical prowess is particularly astonishing because, after 125 years, the company remains an artisanal operation. Simone’s father and his 92-year-old grandfather, Giuseppe, continue to work in the factory. Mauro serves as creative director and hand-burns calligraphy on custom orders, while his dad makes every key fob, even those bearing the Ferrari and Lamborghini logos, entirely by hand. However, now that Simone has taken the family business from esoteric automobile accessories into the topsy-turvy fashion world, which demands new designs every season, he is quickly learning that racing 150 miles per hour around hairpin turns is not the only thing that can make you sweat.