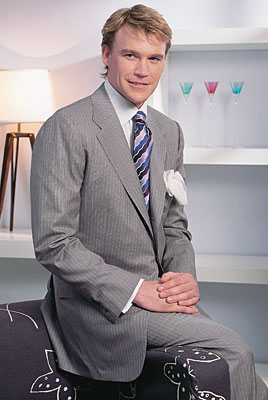 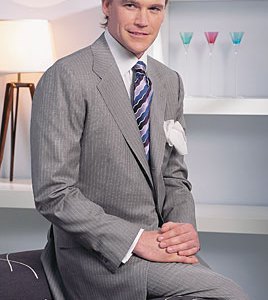 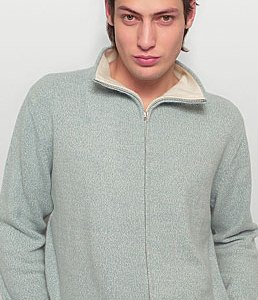 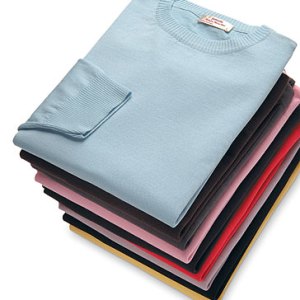 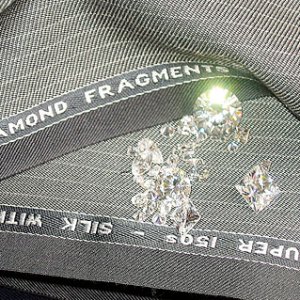 In the fable The Emperor’s New Clothes, a pair of con artists posing as tailors dupe his royal majesty into believing that his new wardrobe is made from cloth so refined that it appears invisible to all but the noblest of gentlemen. Donning the world’s most extravagant materials still holds the same allure, but we are not as gullible as the emperor. Therefore, to cater to the man who wants what no one else has, premium cloth makers are journeying to remote corners of the globe and pushing the limits of imagination—and nature—to deliver ever-finer and -rarer fabrics.

Belgian fabric maker Scabal took the fairytale notion of precious material literally when it produced its Diamond Chip collection of Super 150s worsted wool and silk fabrics featuring pinstripes infused with genuine diamond particles that sparkle when they catch the light. Another of its fabrics, Gold Treasure, is made of worsted wool entwined with 22-karat gold threads in a variety of striped and checked patterns. Scabal also weaves a Super-wool-and-cashmere blend with crushed lapis lazuli, the blue semiprecious stone used to make the breastplate of King David. The company is also trying to develop a cloth that will incorporate platinum ore.

“Men’s suits are pretty dull things, so we are constantly coming up with new cloths just to keep things interesting,” says Terry Brown, Scabal’s managing director for the United Kingdom. “Certainly, [Diamond Chip] makes a good talking point, especially to someone in a business like the film industry, where they want a bit of glitz.” Scabal has sold close to 5,000 meters of the material, enough for about 1,500 suits, making it one of the mill’s most successful new luxury cloths.

Savile Row tailor Richard Anderson, who offers these Scabal cloths for suits costing as much as $8,500, says fabric suppliers are inundating him with similarly rare materials. He recalls one who recently enticed him with what he referred to as a “super duper” 180s wool-and-cashmere blend enhanced with a touch of mink.

Such a mix does not seem so exotic considering the lengths cloth makers will go to to procure unique fibers. Their quests have them trekking to remote sheep farms in Australia and New Zealand in search of extra-fine micron wools, called best bales, that are as delicate and soft as cashmere; combing the Arctic tundra for the discarded fleece of musk oxen to weave cashmerelike knits and topcoat cloths; and courting Peruvian vicuña farmers in the Andes to gain access to the rare camelid fiber from the animal, which was recently removed from the endangered species list after 30 years.

To create its new Cria collection, Italian knitwear manufacturer Avon Celli uses only the long, shiny fleece from the first shearing of Suri alpaca babies, or crias, raised in the high plains of Peru. The fiber is so rare, says Franca Foligatti, Avon Celli’s U.S. president, that the company can produce only about 800 Cria sweaters per month. The naturally hypoallergenic knits are available exclusively at Bergdorf Goodman.

The French fashion brand Dormeuil dispatched a team of buyers to the mountains of Ladakh in northern India, where carpa hircus goats flourish. Their goal was to secure the animals’ very fine, long pashmina fibers, which are used in the company’s new guanashina cloth—a blend of kid pashmina, guanaco, baby cashmere, and Super 200 wool. A guanashina suit starts at about $12,000. “This is the height of luxury,” says the company’s U.S. sales agent, Jim Sheed, noting that Brioni is a top customer. “There are few fabrics like it in the world today.”Representatives from the Italian fabric maker and fashion house Loro Piana traveled halfway around the world to meet Fiona Gardner, a New Zealand farmer who has spent the past 20 years breeding only dark-colored sheep. Because white fleece is easier to dye, man has spent centuries controlling breeding to limit the population of so-called black sheep. Nevertheless, the animal’s natural dark color remains a recessive genetic characteristic. The rare merino wool fleece produced by these aberrant animals is the distinguishing feature of a new line of Loro Piana cloth called Pecora Nera. Because the finished fabric does not rely on dyes and other chemical agents to achieve its natural mélange of brown-to-black colors, the fibers retain their intrinsic softness.

While wool from white sheep dominates the fiber world, few of these animals are bred under such strict conditions as those of the flocks of Australia’s Gill family. By manipulating the animals’ diet and environment, the Gills are able to produce merino wool fiber that measures from 12 to 14 microns, a fineness comparable to vicuña’s. “Vicuña is a rare fiber that is very short and, therefore, limited in how it can be used,” says family patriarch Ian Gill. “But our wool is rarer than vicuña, because sheep don’t normally produce wool this fine.”

Gill, referencing the adage that you have to develop thick skin when confronted by a bully. By keeping the bully sheep segregated, he says, his farmers reduce stress levels on the rest of the herd. The Gills sell their fiber and fabrics under the brand Jemala, the 16-year-old farm’s moniker, which combines and condenses the names of Ian’s sons, Jeffrey and Matthew. Jemala is further distinguished as one of the first sheep breeders to market finished suit cloth woven by English mill Taylor & Lodge and Loro Piana, and it even has developed a collection of knitwear that debuted this fall at Paul Stuart in New York.

The primary appeal of such cloths is their exclusivity; some of the fibers are so scarce that fewer than 100 suits can be produced from the available finished material. Such limited supply fuels the high prices breeders charge for the fibers. Weaving the fibers into cloth is also expensive because of the technical challenges involved in the process. In addition, the fabric produced is so delicate that it requires specialized hand-tailoring skills, which further add to the expense of a garment. In the most extreme cases, you could pay as much as $35,000 for a finished suit. Bear in mind that the suits constructed from these delicate materials are so fragile they cannot stand up to regular use, which calls into question the point of such lavishness.

“Why does a Swiss watchmaker produce a watch with diamonds and rubies? It’s the same principle,” says Nick Hall-White, chief executive of the Scottish textile mill Reid & Taylor. It is one of only three mills in the world that produces Escorial, an ultrafine merino wool cloth similar to Jemala. Reid & Taylor weaves the cloth from the fiber of a rare breed of miniature sheep descended from a flock kept by King Philip II of Spain in the 16th century. Oxxford Clothes and Brioni are the only two fashion brands offering Escorial fabrics in the United States. Wealthy men, says Hall-White, already have closets full of navy suits and cashmere blazers, a situation that challenges clothing manufacturers—and subsequently, cloth merchants—to develop products that break from the status quo.

“There is always a certain percentage of the population that wants what no one else can have, and that is what we are targeting now,” says Gordon Kaye, the chief executive of Taylor & Lodge. Kaye adds that by offering the affluent man something new to hang in his closet, he and his European peers can survive competition from developing countries such as China and India. As these countries have begun to dominate the basic textile market, British and Italian mills have had to concentrate their efforts at the high end of the market to compete. “Cloth production in the U.K. and Italy will survive on the development of fabrics so fine and exclusive that the Chinese and Indians don’t have the skills to make them,” Kaye explains, noting that the quantities involved at this level are too small to concern such mass manufacturers.

For the past two decades, efforts to enhance fabric quality have centered on a numbers game played with wool fibers. Under natural conditions sheep’s wool can measure as thick as 45 microns in diameter. But by tweaking and refining breeding conditions, farmers have managed to shave that number by more than two-thirds. These finer-micron wool fibers produce fabrics called Super wools, which are further delineated by numbers that correlate to the fineness of the fiber used to make them. As a general rule, the higher the number, the finer the fiber.In the early 1980s, textile mills touted the unprecedented softness of Super 70s wool made from fibers measuring 21 microns. It did not take long to surpass that achievement. By the early 1990s, many of the better mills were weaving Super 170s wool from fibers measuring 14.5 microns—even finer than cashmere, which measures about 15 microns.

Despite the marketing hype surrounding Super wools, Jemala’s Gill questions whether a man really cares if the cloth is a Super 150 or a Super 190, or even understands the difference. “Even the weavers are wondering if this strategy is working,” he says.

And now that the industry has developed a Super 210 made of wool fiber measuring 12.9 microns, the material world has hit a snag. “There’s really not any further you can go,” says Scabal’s Brown. To breed the wool any finer would risk the lives of the animals. In addition, he says, “There’s a limit to how fine you can spin the actual yarn made from the fiber.”

“Think of it like running a world-record mile,” says Dormeuil’s Sheed. “All you can do is clip seconds off it.” Which means leading-edge textile companies such as Dormeuil and Scabal will be hard-pressed to continually develop intriguing and innovative materials such as guanashina and Diamond Chip. For them, staying above the competitive fray has become a virtual magic act: The trick is to convince men that there is more to these fabrics than meets the eye. But, Sheed concludes, “It’s becoming more difficult to pull an unusual rabbit out of the hat.”