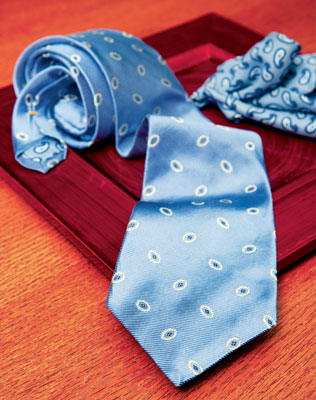 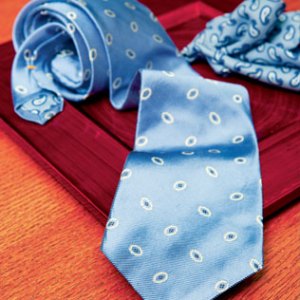 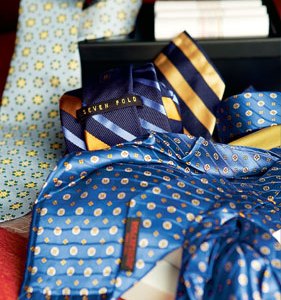 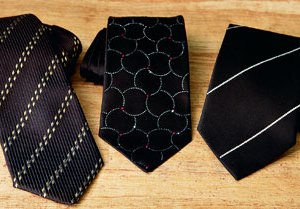 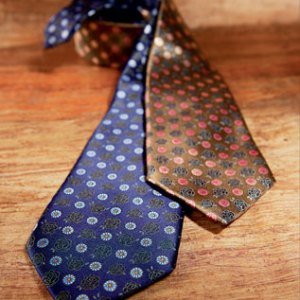 Fashion imitates art at Dolcepunta’s New York showroom, where a gilded picture frame showcases a colorful silk necktie that has been turned inside out, butterflied, and pinned to reveal the numerous hand folds and stitches executed by company founder Rolando Scapellato. More than just an illustration of the complexity of fine neckwear construction, the display represents the Italian brand’s perception of the necktie as a cloth masterpiece.

While some may consider ties only as complementary components of traditional business attire, Scapellato and other designers are creating neckwear that could be any wardrobe’s most visually compelling accessories. New fabric technology has allowed for increasingly intricate jacquard-woven patterns in an expanding kaleidoscope of colors and with shining embellishments made of metal or crystal. But to understand the true artistry involved in crafting a necktie, you need to turn it inside out. At Dolcepunta, Scapellato spent nearly a year experimenting with silks of varying weights—from 2.8 ounces to 4.4 ounces—until he succeeded in producing a necktie that comprises 11 interior folds without being bulky and difficult to knot.

Until Scapellato developed his 11-fold tie, seven-fold construction served as the litmus test for neckwear quality. Conceived in the United States more than a century ago and based on the same mathematical principles used in origami, a seven-fold necktie is constructed from a single piece of silk folded in on itself seven times to create a symmetrical, triangular-tipped blade. The folds endow ties with strength and stability, but after silk became scarce during World War I, the use of linings—which were better suited to mass production—soon prevailed. Linings made neckwear more affordable, because their use reduced by half the required amounts of costly silk while also eliminating the complex and time-consuming hand-folding process. Consequently, seven-fold neckties and the craftsmen who made them were virtually obsolete by the early 1930s.

Decades later, the late Audrey Talbott, wife and business partner of California tie maker Robert Talbott, came across one of her uncle Louis’ favorite neckties: a seven-fold made by Charvet of Paris at the turn of the 20th century. The Talbotts were so impressed with the tie’s construction that they lured tie maker Lydia Grayson out of retirement to teach their staff the folding process. In 1986, just before Robert Talbott passed away, the company introduced Seven Fold by Robert Talbott, a collection that continues to incorporate new fabrics, including unorthodox blends such as cashmere and mink or cashmere, silk, and Orylag, a yarn derived from an animal in the chinchilla family. Over the past few decades, fashion brands ranging from Kiton and Borrelli to Massimo Bizzocchi and Bulgari have offered their own variations on seven-fold neckties—some with linings and others without. This year, Domenico Vacca has introduced a nine-fold incarnation for his six retail stores.

Although the folds serve some structural purpose, Scapellato contends that they also enhance what he calls the neckwear’s “romance.” His $275 Dolcepunta 11-fold neckties require about a square yard of silk, which is double the amount needed for a standard seven-fold tie. “It’s only for the connoisseurs,” he says, adding that his tie makers need “golden hands” to manipulate the extremely delicate cloth into perfect, compact folds. “When you put all those folds into a tie, the trick is to keep the lightness,” he explains. “Otherwise, you’re going to end up with a tank around your neck.”

Beyond reacquainting gentlemen with folds, neckwear makers have been equally intent on improving silk manufacturing and printing processes to create ever-finer materials and more intricate and colorful patterns. Older silk looms used for weaving fancy jacquard patterns can accommodate only eight different colored threads at a time, which limits tie makers to those color combinations. But Robert Talbott uses a double-headed jacquard machine, enabling the company to produce neckwear with more than twice the standard number of color variations.

When Holland & Sherry launched its first tie collection last spring, the English cloth supplier exercised its clout to develop a silk weave that uses 220 picks (or threads) per inch in the weft and 350 ends (or threads) per inch in the warp—almost twice the number of threads used in the warp of a typical silk cloth. “In woven neckwear—as opposed to prints—if you want fabulous design definition, you fill up the warp,” explains John Minahan of Individualized Apparel Group, which owns Holland & Sherry. Minahan points out that Holland & Sherry adapted many of its tie patterns from 19th-century English designs and recolored them to complement the firm’s seasonal suit cloths.

Italian brand Tino Cosma recently has introduced ties made from polka-dot silk velour, a plush material not typically associated with neckwear. “This is not the old-fashioned velour, like tapestry,” says Angela Libani, the company’s U.S. general manager. “These ties are made of a very shirred silk that produces no fuzz at all, and they look great with fall’s tweedy, sporty jackets.” Another Tino Cosma collection incorporates 24-karat gold threads into silk stripes for a subtle hint of shine. In a similar vein, Italian designer Stefano Ricci—known for fanciful multipatchwork pleated ties made from 280 squares of silk and the Solo Una made of Super 210 wool and cashmere—has introduced a collection of silk-satin evening ties appliquéd with tiny sparkling Swarovski crystals.

Neckwear makers also are developing printing techniques to enhance the definition and dimension of intricate patterns. Italian menswear brand Ermenegildo Zegna has devised a multistep printing process that imparts a metallic effect to its Cesello collection, the name of which is a reference to the 16th-century sculptor and goldsmith Benvenuto Cellini. (Cesello is the Italian word for chiseled.) The collection’s distinctive three-dimensional look is achieved through a proprietary process that culminates with metallic lacquerlike dyes being placed as pin dots and shadow accents on multicolored, screen-printed patterns. Made of duchesse satin, a material once reserved for haute couture ball gowns, the elegant $155 ties are suitable for both formal wear and business attire. Zegna plans to limit production of its Cesello ties to 24 designs in fewer than 12 colors per pattern, further adding to their collectible appeal—an increasingly important aspect of neckwear.

For decades, Hermès has produced five-fold silk twill ties made in color combinations that it retires at the end of each year. These neckties have serial numbers to help collectors locate out-of-print patterns from previous years (if they have not sold out). Since Henri d’Origny introduced the first Hermès tie in 1949, the company has produced approximately 1,600 different designs.

Still, no tie is more exclusive than one made to your own specifications. “If a guy wears a custom suit and a custom shirt, why not the tie, too,” says custom tie designer John Kochis, who allows his clients to personalize every element, from blade width and length to the fabric and even the weight of the inner linings. Kochis also notes that many companies may claim to make custom ties, but most offer only a set number of different length and fabric options. “But when you sit down with the tie maker and you can request a specific lining, fabric, and width, you can’t get more specific than that,” he explains. “I have a couple thousand fabric swatches to choose from, and if I don’t have exactly what he wants, I can usually get it.”

While custom neckties are highly recommended for those who are difficult to fit, girth and height are not the only reasons for choosing the custom route. “The third reason a man buys a custom tie is because of his size,” says Kochis, insisting that fabric selection and choice of details should take priority. “It’s a matter of personal expression, not fashion.”