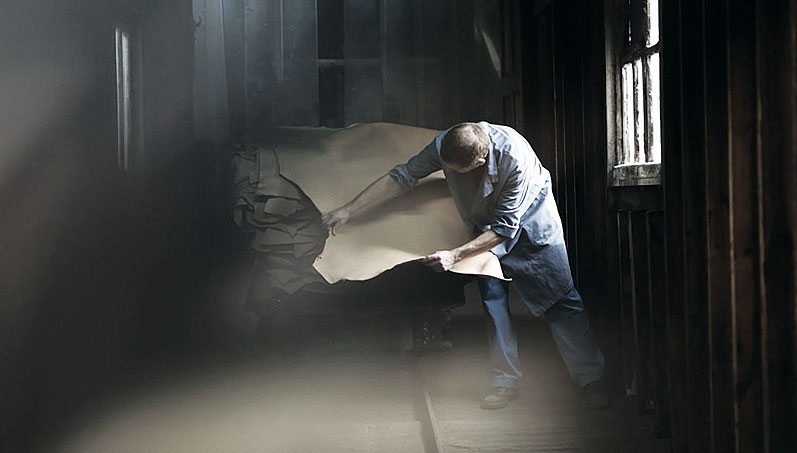 In a quiet village outside Paris, a small group of craftsmen slices strips of wood by hand, while other workers meticulously hammer tiny brass nails one by one. Nearby, sewers are joining swaths of fine leather, using linen thread that has been dipped in beeswax to create a smooth stitch. The air carries scents of wood, leather, and wax, and one might easily mistake the year for 1859, when Louis Vuitton established this workshop in Asnières-sur-Seine to create the custom trunks and travel accessories that would make him an international name.

In the 153 years since, the atelier has served a discerning clientele, building custom and made-to-order pieces such as a folding bed trunk for explorer Pierre Savorgnan de Brazza in 1875, a portable secretary desk outfitted with bookshelves and a typewriter for conductor Leopold Stokowski in 1936, and custom camera bags fitted with special compartments for photographer Annie Leibovitz. But in recent years, the Louis Vuitton name has become more associated with mass-produced luxury goods made in factories in France and Italy. It is the flagship brand in the LVMH conglomerate, a group with nearly $29 billion in annual sales. Handbags and accessories with the signature LV badge are showcased in some 450 Louis Vuitton boutiques around the world, making that insignia one of the world’s most recognized luxury logos.

Now, after years of success on a grand scale, the company is returning its attention to the small atelier and expanding its made-to-order and custom lines. It is building workshops across Europe to further its use of old-world craftsmanship and training a new generation of artisans in the creation of handmade luggage, footwear, watches, jewelry, and fragrances. In doing so, Louis Vuitton is recapturing the essence of the bespoke profession that emerged in the 1800s—a vocation known as the carriage trade, where patrons ordered custom clothing, jewelry, and other goods from a local proprietor, who enlisted skilled craftsmen to create the pieces.

That tradition is evident at Asnières-sur-Seine, where, under the guidance of Patrick-Louis Vuitton, the company’s head of special orders and a fifth-generation descendant of the founder, the atelier takes no more than 500 custom orders a year. Each commission begins with a client meeting. After a series of renderings and approvals, the piece goes into production; delivery of the finished product can take up to a year or more. Prices can range from $3,100 for a small, hard-sided trunk to $114,000 for a casino trunk equipped with games, but they can go higher depending on the materials and the complexity of production.

“Without the Asnières workshop, I don’t think we could have maintained the traditions as well as we have,” says Yves Carcelle, company chairman and CEO. “When you visit the workshop you can see the passion of the craftsmen and feel the emotion.”

Among the company’s new workshops is a footwear atelier, built three years ago in Fiesso d’Artico in the Veneto region of Italy—the cradle of shoemaking since the 13th century. The atelier uses age-old techniques, such as sprinkling tiny pieces of cork under the sole for cushioned comfort and handpainting the bottom of the shoe. Its master shoemakers have trained apprentices in the art of handcrafting shoes; now there are enough craftsmen to allow the brand to offer for the first time made-to-order footwear in a few Louis Vuitton stores in the United States, including the Fifth Avenue flagship boutique in New York City. Clients will select from a wide assortment of leathers and exotic skins, and have shoes made to their specifications. The shoes, which take approximately six to eight weeks to complete, are priced from $2,600 for leather to $12,400 for exotic skins.

The made-to-measure service has been extended to handbags through the company’s new salon, Haute Mar­oquinerie, which opened in the Fifth Avenue store in June. Clients choose from an array of leathers, exotic skins, and hardware options to create custom handbags and totes, which start at $7,900 but can cost upwards of $100,000, depending on the skin and the complexity of the bag.

In addition to its leather-goods workshops, Louis Vuitton has watchmaking ateliers in La Chaux-de-Fonds in the Swiss Jura Mountains and in Geneva, where it developed the brand’s first in-house complicated-watch movement, the Tambour Minute Repeater. In July, the company opened a watch-and-jewelry boutique in Paris’s storied Place Vendôme that has a jewelry atelier above the store for special commissions and customization. Next year it will open a larger watchmaking facility in Geneva.

Louis Vuitton may be applying its name to everything from watches to perfume, but the brand clearly is not willing to sacrifice the art of handcraftsmanship. The artisan who carefully stretches the leather over a carved wooden shoe last, achieving just the right form and finish, is creating a kind of beauty that cannot be duplicated by a machine.