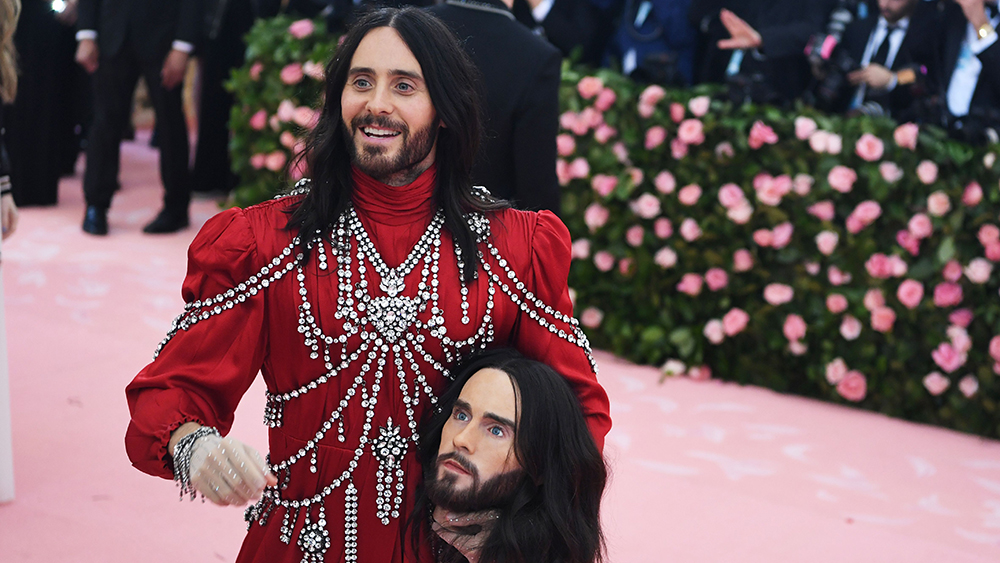 At most red carpet events, all guys have to do is put on a tuxedo, make sure there’s nothing stuck in their teeth and show up on time. But at this year’s Met Gala, the annual fundraiser for the Metropolitan Museum’s Costume Institute, that wasn’t the case.

That’s because the theme of this year’s gala—and the exhibit it honors—was “Camp: Notes on Fashion.” If that sounds familiar to any comparative literature majors out there, it’s because the entire affair was organized as a reflective response to Susan Sontag’s 1964 essay “Notes on ‘Camp,'” in which the late filmmaker and political activist codified the word as representing a specific, heightened sensibility and approach to style. “Camp is a vision of the world in terms of style—but a particular kind of style,” she wrote. “It is the love of the exaggerated, the ‘off,’ of things-being-what-they-are-not.”

And while plenty of guys did turn up to the pink carpet at the Met on Monday looking great in pretty standard black tie fare (Alexander Skarsgard: here’s looking at you, kid), a lot of guys tried to do something a little out of the box—much to the surprise and delight of both professional and amateur fashion critics alike. While not everyone hit the mark, the guys who caught our eyes represented an interesting bell curve that falls into three categories: Classic, Camp and Somewhere in Between. A survey of the best-dressed guys at the Met Gala below.

There’s not much that separates the elegant, single-breasted peak lapel tuxedo jacket A-Rod donned for this event from most others, other than it’s pink—and while he looks great, bold colors alone don’t constitute camp.

How do you compete with one of the greatest athletes of all time? You don’t.

Lady Gaga’s wild entrance at the Met Gala was a tough act to follow, but Billy Porter’s entrance was just as weird, wonderful and unexpected as hers. His glittering Egyptian hieroglyph come to life, courtesy of The Blonds, was one of the campiest things we saw all night.

Taking an idea straight from Gucci’s Fall 2018 runway, Jared Leto (who hosted the event alongside that brand’s creative director, Alessandro Michele) carried a replica of his own head down the red carpet.

You could argue that the height of camp is doing the direct opposite of what’s expected. And wearing a Prada windbreaker instead of a full high-fashion kit? What could be more contrarian than that?

A lot of drag is very, very camp. Kudos to Harry Styles for recognizing this and showing up in feminine garb from Gucci.

Likewise, there were some people who were disappointed that RuPaul showed up in more masculine suit (albeit one covered in pink zebra stripes). But if you’re the most famous drag quen on the planet, what could be more subversive than menswear?

With those five additional eyes painted on his face, you could almost forget that Ezra Miller’s Burberry suit was tailored to accommodate a rhinestone corset.

The original king of high-end streetwear, who dressed a number of the gala’s attendees, made a white-tie tuxedo for himself instead of pulling something from his very camp archives. That choice easily made him one of the best-dressed (and campiest) guys on the red carpet.

It’s a great suit, accented with floral embroidery—but it merely scratches the boundaries of camp and doesn’t really pass them.

The sequined Atelier Versace tuxedo was eye-catching, but not enough to pull Golding into full camp territory.

Cole Sprouse’s Ferragamo look, which stripped the arms from a bright red embroidered suit, was youthful and interesting. Camp? Not so much.