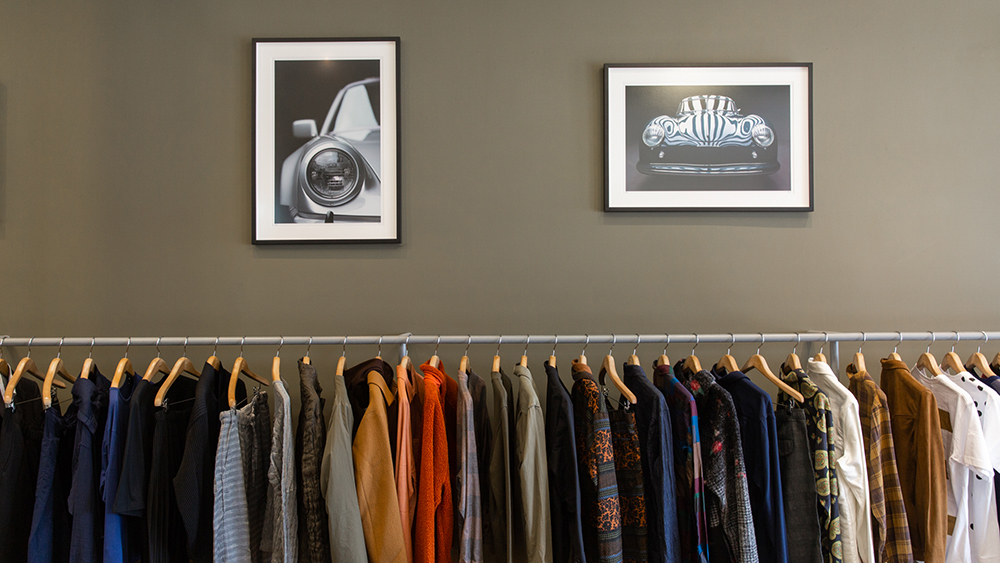 Don’t tell New York City, but when it comes to men’s shopping, sunny SoCal has eclipsed the Big Apple.

Sure, New York has the advantage of being America’s official fashion capital, not to mention four distinct seasons (come fall, racks in the five boroughs are lined with the kind of hefty outerwear which helps line retailers’ pockets). But Tinseltown has its own particular assets, like a distinct approach to dressing that’s more about preserving a certain laissez-faire lifestyle than, say, self-preservation during harsh meteorological conditions. Blame the year-round sunshine, the lucrative tech industry, or its place at the very heart of where the entertainment and media industries intersect, but right now is an amazing time to be a style-minded guy in Los Angeles. Don’t believe us? Here are 14 stores that have men’s style on lockdown.

At four times the size of its dark jewel box location in New York, Bode’s LA store is capacious and airy. Skylights bring in California’s warm glow and the rich wooden cabinet-lined walls make it feel like stepping into an enormous (and elegant) version of your grandparents’ attic. The design befits the clothing’s vibe—upcycled or made from found textiles in vintage workwear silhouettes. It’s what’s made the brand and its designer, Emily Adams Bode, such a hit. In our supremely digital, mass-produced world, her work is folksy and lo-fi, in the best of possible ways. She and her husband Aaron Aujla, of the cult furniture and design firm Green River Project, took inspiration from mid-century municipal buildings and then put it through a Wes Anderson lens to get something anachronistic with the perfect amount of kookiness. That lived-in charm is all over the store, from the rugs to the chaise covered in a turn-of-the-century tapestry.

From former Burton creative director Greg Dacyshyn comes Camp High, a clothing brand built less on garments and more on a spiritual philosophy of sorts. If that sounds highfalutin, it’s not—the label consists mostly of plush, tie-dyed sweatpants and hoodies printed with psychedelic mantras and iconography, something perfect for the high-vibe, low-key coastal hippies that populate ritzy enclaves like Malibu and Venice Beach. Camp High’s store, which opened late last year in the tony Pacific Palisades neighborhood, is stuffed with these relaxed and optimistic pieces (John Mayer is a fan) and has a very mellow, yoga studio energy to it. And as the past year has taught us, sweats can certainly be stylish; just check out Dacyshyn’s own Instagram account for further proof. As the kids say, it’s a vibe.

Belgian designer Dries Van Noten chose Los Angeles as the location of his first American flagship (over the more expected choice of New York). And the store, a two-story set of moody rooms on La Cienega, is a dazzling, elegiac beauty. At turns elegant and sophisticated and even a bit wistful, the shop has surprises at every corner. Upstairs is where the menswear lives, everything from floaty beach caftans to languid tailoring, to the whimsical seasonal goodies (this season the clothes are decked out in photos the designer and his team took of Antwerp, where he lives). There’s plenty of space for shoes and sunglasses and an area dedicated to archival pieces from past collections that can be added to your own personal archives. In addition to womenswear, the downstairs includes a rotating series of guest designers, artists and makers of all kinds while the “Little House” at the back of the building’s parking lot houses a gallery showing works from the likes of Rene Ricard and Peter Shire. Go and plan to spend many hours there.

This longstanding store has helped shape the LA menswear scene since 1991, when it became the West Coast outpost for the original New York location. The store in the Big Apple has since closed, but under the guidance of Chris Gibbs, the La Brea Boulevard shop continues to attract influential style enthusiasts. Perhaps its most important contribution is ignoring the hierarchical boundaries of men’s retail—separating high fashion from contemporary from streetwear—and instead mixing it all together—trusting that guys would figure out and in fact, embrace the mix. Now, pretty much every store does that. That Union was based on a foundation of streetwear has only helped it firmly claim its reputation as sartorially clairvoyant in a very difficult-to-predict industry. In the last year, the store has also opened a second location in Tokyo, launched its own in-house line, and collaborated with Vans, Adidas Spezial, and, to much hype, Jordan. In other words, for a fashion stalwart, they look like they’re just getting started.

With its stark interior and emphasis on up-and-coming labels and brands that lean toward the avant-garde, H. Lorenzo has been offering dramatic alternatives to the laidback, surf- and skate-inspired aesthetic that has been the city’s default aesthetic position since its first store opened in the early ’80s. Just last year, its founders took that well-established know-how and opened up a men’s standalone boutique. There, they’ve continued their talent for carrying an assortment of boundary-pushing pieces from labels that you haven’t heard of yet (think A-Cold-Wall, Y/Project, 99% Is) and more familiar names (Comme des Garcons Homme Plus, Walter Van Beirendonck, Craig Green), with a sprinkling of cool-kid classics from Maison Margiela, Acne Studios and hometown hero John Elliott. Anyone from a Hollywood Goth to a streetwear enthusiast to your average Hollywood slickster looking for something streamlined and stylish will find something here. All in all, the store’s mix underscores that local style is all about balancing extremes.

A notoriously casual city, The Bloke is a bit of an outlier for the guy who still feels best in a classic two-piece suit (or some variation thereof). Located in the tony hamlet of Pasadena in the outer reaches of LA’s infamous sprawl, the store features brands that perfectly encapsulate the nouveau prep feeling taking over the men’s market as streetwear’s ubiquity suddenly feels a little old hat. Labels like Ring Jacket, Rowing Blazers and Drakes sit alongside more casual sartorial fare and fun doodads like model cars, vintage magazines and the like. The store even offers bespoke services, courtesy of local tailor Jonathan Behr, starting at $3,200.

Hidden from passersby in a building that once served as Howard Hughes’ Los Angeles digs is one of the city’s most inventive and luxurious stores, Just One Eye. For those tuned-in enough to know about this discreet shopping destination, a sense of mystery is part of the allure. Once inside, shoppers will find an assortment of art, fashion and other ephemera unlike anywhere else in the city. While it stocks familiar names like Calvin Klein and Gucci, it also sells pieces from lesser-known brands like OAMC and Julien David. But most impressive are the man-cave-friendly collectibles, which ranges from rare concert clothing that can set you back five figures, to fine art and home decor pieces (including a Ron Arad chair priced at $130,000). You’ll also find limited-edition prints, and an invitation-only “seduciary” billed as a passage into the pleasures of the private mind.

The store will be moving from its current location in due course. Where to? Finding out is part of the fun.

Housed in a severe concrete-and-glass structure on Melrose (directly across from the trendy steakhouse Craig’s) is the now-iconic Maxfield. Under the watchful eye of Tommy Perse, the store stocks luxury brands with an emphasis on a stark rock-n-roll sense of chic (think sharply tailored goods from Saint Laurent, Givenchy and Balenciaga) more cutting-edge eye-catchers (Rick Owens, Junya Watanabe) and haute streetwear made by locals (Rhude, Amiri). Additionally, there are home goods, timepieces and high-end jewelry, one-off projects or collaborations and, more recently, special installations. It’s not uncommon to see a stylish celeb or, increasingly, basketball player, getting their fix at the West Hollywood shopping palace (or snapping a selfie with the sculpture out front).

Every second Sunday of the month, vintage aficionados set their alarms for the wee hours and head north to Pasadena for the best vintage shopping in town. Even before sunrise, booths at this enormous flea market are buzzing with activity. Each vendor has his or her specialty, be it 90s streetwear, hard-to-find Supreme or workwear that would make a Gold Rush miner green with envy. It’s true treasure hunting, a magical circus that disappears by late afternoon. Because of that, whatever you find feels like it was meant for you. Prices vary but there are deals to be found, especially for early birds or those who buy in bulk. It’s undoubtedly one of the best shopping experiences in California, a can’t-miss for those who love fashion of any kind.

Housed in a former moped shop where East Hollywood and Silverlake meet, just around the corner from the popular breakfast spot Sqirl is Virgil Normal—named so because it sits near the corner of the streets Virgil and Normal. A self-described “friendly store for friendly people,” is owned by stylist Shirley Kurata and freelance designer Charlie Staunton, the store features an eclectic mix of hipster workwear from brands like Carhartt WIP, Brain Dead, Monitaly, Stan Ray, Ben Davis and its own highly covetable in-house brand. The store also sells hard-to-find zines, household trinkets (ahem, crystals), and fun accessories like tote bags or graffiti-inspired art.

Kevin and Bo Carney oversee a small and influential network of stores in Los Angeles, self-described “general stores” with locations ranging from east (Silverlake) to west (Venice, where a location comes complete with a lovely outdoor space and sometimes plays host to rotating art installations). The vibe of the store—with ethereal selections from luxury brands like Lemaire, Dries Van Noten, Comme des Garcons Shirt and Issey Miyake—is subtle to the point of meditative. Homewares, like candles, dishes, soaps, art books and rare magazines are displayed in the same sophisticated but unfussy mode. All of which serves as a nice counterbalance to some of LA’s showier spots; this one is elegant but infused with an unmistakable sense of beachside ease.

As is its wont, Comme des Garcons’ retail megaplex Dover Street Market—which already has outposts in New York, London, and Tokyo, to name a few—chose a trendy yet far-flung neighborhood for its West Coast debut. In LA, that’s a corner of the downtown-adjacent Arts District. Tucked away in a discreet-looking white industrial building is 15,000-square-feet of space dedicated to the wild and sculptural visions of Comme des Garcons designer (and fashion legend) Rei Kawakubo. The store, however, is also known for its dedication to discovery and surprise, and within the expansive warehouse space, you’ll find shop-in-shops selling buzzy high-end household names like Balenciaga, Gucci, Prada and Margiela, as well as cult favorites like Noah, Sacai, Evan Kinori. There’s also no shortage of brands with cool-kid street cred, like Stussy (which is based just down the road in Orange County), Brain Dead, Awake and Bianca Chandon.

Located on La Brea, American Rag has long hosted trendy, casual brands that are hard to find at more mainstream boutiques. The sense of discovery, and an emphasis on brands that are based locally, gives the store a breezy, comfortable feel. Additionally, there’s a denim bar next door because, well, jeans are to LA as suits are (were?) to New York. And, as LA is known for its incredible vintage scene, there’s a highly-curated selection of great pre-owned wares mixed in too.

Recently relocated from LA proper to Palm Springs, RTH channels all that is mystical about SoCal—Native American beadwork, desert vibes fringed leather, oversize tunics, distressed denim, Southwestern talismans—and brings it together in a way that feels utterly urbane but also slightly outdoorsy. Think of this store as offering a sophisticated vision of the city’s Wild West origins.