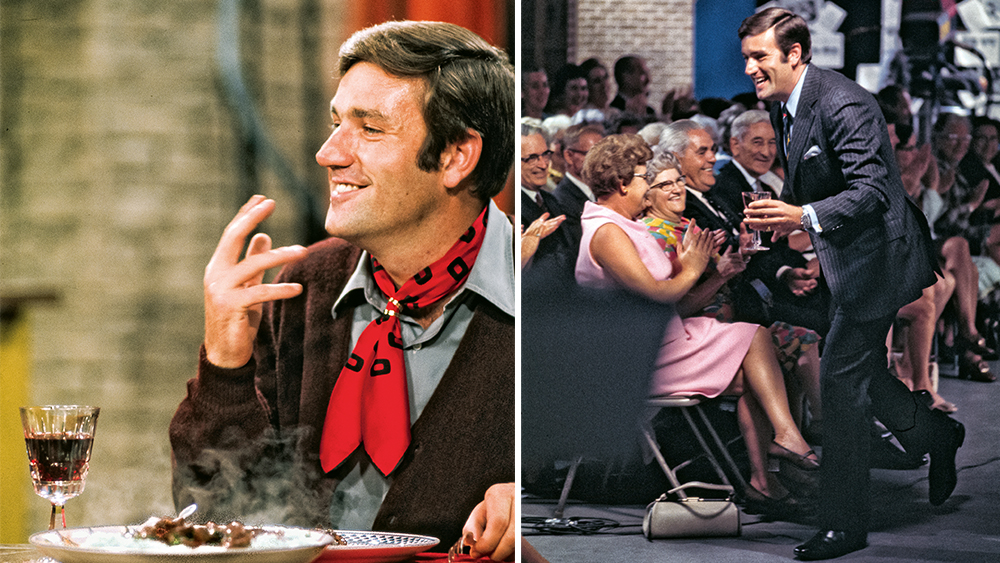 At some point during the pandemic, the algorithmic jackpot shuffle of my YouTube account landed on a set of videos from an old cooking show called The Galloping Gourmet. Originally aired for just a few seasons in the late ’60s and early ’70s, but shown in reruns for years after, the program became known, in large part, for its unanticipated popularity among children who were mesmerized by its star, Englishman Graham Kerr. As a child, I, too, was among the faithful, and while my cooking skills may not reflect it today, it is a show I remember with unusual clarity—not for its recipes or cooking tips, but for its incredible sense of style.

In retrospect, the program’s appeal among children was, perhaps, all the more surprising given the show’s general pitch—a sort of très sophistiqué cocktail hour with Kerr as the host. This playfully debonair, slightly naughty cut-up who skirted the boundaries of bawdiness just enough to keep kids feeling as if they were in on the joke, did everything with a wink and a smile that felt directed towards us. Kerr was part culinary Mr. Rogers, part English dandy and part world-class goofball.

Moving with the grace of Dick Van Dyke and the dexterity of a magician, he chopped onions at lightning speed without looking and rolled out comically long sheets of pastry to the delight of the studio audience. A nimble, lanky figure who wore a signet ring on his pinky and had a wardrobe full of double-breasted suits, tartan vests, cardigans and checked pants, Kerr frequently appeared with a drink in hand—an accessory that became as much a part of his look as his clothes. Upon re-watching, Kerr’s insouciantly elegant fashion choices look surprisingly relevant. A fan of wide collars and scarves, he sometimes wore the latter clipped or knotted, Mr. Furley-style at the neck, sometimes styled as an ascot. More than once, he cooked in a tux.

The show was filmed against a set that hit virtually every aesthetic touchstone of its day. The color-blocked space was meant to look like the den of a house, but its effect was more lair than home. Decorative touches included a rack of rifles, crests and swords that looked like they came from the Metropolitan Museum of Art’s Hall of Arms and Armor and furnishings in the Millennial pinks of the time: orange, yellow and a disproportionate amount of brown, all anchored by an avocado green or copper-colored carpet. Kerr himself wore so many of these colors it occasionally looked like he was camouflaged by his own daywear.

The ambient, Brubekian theme music (composed by a musician with the gloriously appropriate name of Champ Champagne), conspicuously placed objèts and half-empty wine wall implied a sort of refinement and urbanity that was more indicated than real. Even the swirly, curlicue, Three’s Company-esque fonts on the credits were over the top (a quick search on the Internet reveals they are most likely to be Ringlet and Rangpur), as if to set the mood both coming and going.

The dishes Kerr prepared were similarly “worldly” and hardly something a child would willingly eat, let alone have any reason to learn how to prepare. Hearty, pungent, complicated recipes that relied on exotic ingredients, offal and alcohol-dependent sauces, they were the kind of meals Henry VIII might have enjoyed if he’d lived near a specialty food shop in 1970s Long Island. Remembering my own absorption in these programs, I now imagine elementary school-aged children of the time enjoying an after-school cognac while engrossed in the complexities of how to properly tie a saddle of lamb for Lamb Apollo.

In re-watching these shows, I realized that much of what made Kerr emerge as a style icon—and what makes him, to me, so different from many of today’s alleged influencers—wasn’t showmanship or clothing or even being emblematic of an era. It was a true sense of self, enthusiasm and humor—all of which are hard to fake. Kerr wore his eccentricity like a second skin, a lesson in style that transcends fashion. Although they appeared to make the man, the clothes, like the cooking, were almost beside the point.

While Kerr’s signature cravats and butter-laden recipes for langouste flambée and Bell Block Chicken Livers are things of the past (Kerr very publicly renounced his own cooking after his wife, who produced and co-created the show, suffered both a heart attack and a stroke in the ’80s), his élan endures. Thankfully the Galloping Gourmet’s singular approach to entertaining was memorialized in a cookbook, which Rizzoli reissued in 2018. And the original episodes live on thanks to YouTube, where you, too, can watch with rapt attention as an ascot-wearing goofball shows you how to prepare the perfect Poulet Farci Truffière.