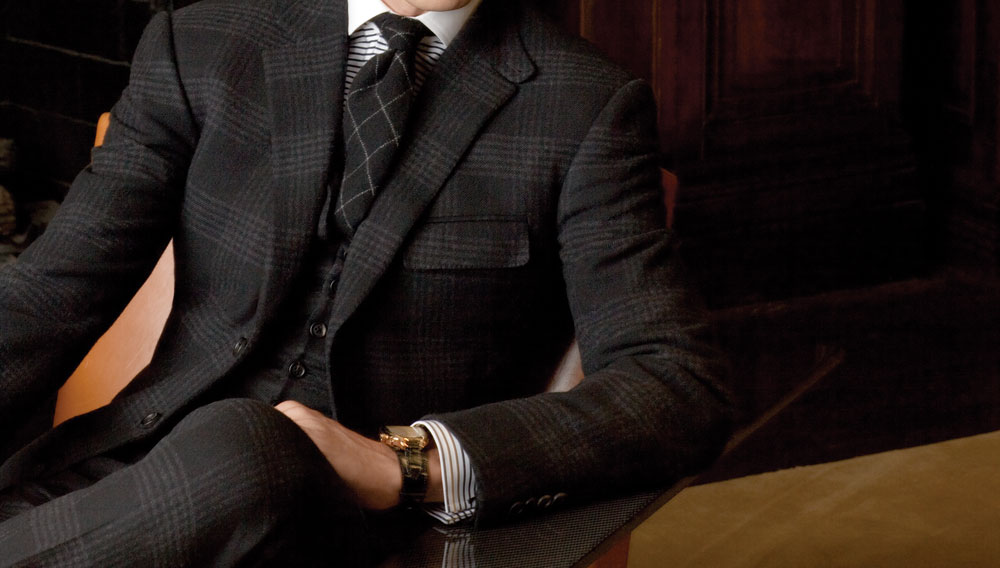 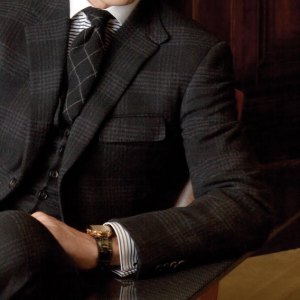 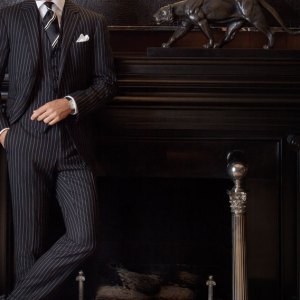 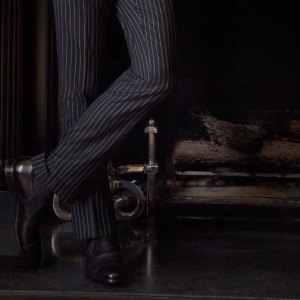 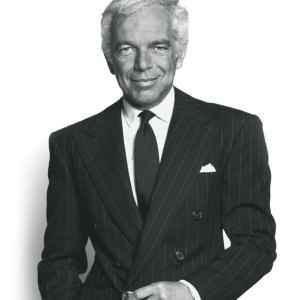 Twenty-five years ago, when Ralph Lauren converted Madison Avenue’s magnificent Rhinelander mansion—one of the last remaining turn-of-the-century grand homes in Manhattan—into his New York flagship store, he did much more than set a new standard for luxury retail spaces. Built in 1898, the imposing French Renaissance Revival home serves as a stage on which Lauren can arrange his creations to conjure tableaux of a bygone era when gracious living was very nearly an art form. For years, the rooms of the house, which are adorned with decorative carpets, period furniture, crystal chandeliers, and tastefully appointed accessories, provided an elegant and cordial context for Lauren’s comprehensive men’s, women’s, and home collections. The timelessness of his style—which contrasts sharply with the fleeting trends that define much of the fashion world—has enabled the designer’s brand to maintain its enviable position as a market leader for decades. His classic sensibility, however, also embraces change: In September—?in commemoration of the New York store’s original opening—Lauren plans to redefine his vision for life well lived with his men’s store’s official unveiling.

Lauren has renovated and rethought his venerable venue on Madison Avenue, transforming the space into an exclusive men’s store that will cater to customers as though they were members of a privileged gentlemen’s club. (The brand’s women’s and home products have been moved to a newly built retail structure across the street.) In addition to an expanded selection of custom and made-to-measure clothing and accessories, the revamped retail space will offer customers perks such as butler services.

In many respects, the Madison Avenue store reflects the personal world of Ralph Lauren, who at age 70 presides over his own global empire. He has created a retreat from the pressures and cares of daily life, he says, where men will be able to immerse themselves in elegant surroundings, relax with a beverage, and educate themselves on the finer points of style. “Today’s customer is more well traveled, open, and sophisticated; they no longer want just what you offer them,” says the trim-looking designer, whose sun-bronzed features contrast strikingly with his perfectly groomed white hair. For him, the value of the store’s services will lie not just in its made-to-measure tailoring, but also in the staff’s ability to tutor clients in making creative personal choices. “You are buying our style guidance,” he says. “You can walk into any custom tailor, and they can make you any suit. But when you come to us, we give you guidance on the fit that is right for you, the right shirt collar and tie width. We’re showing men how they can wear something in unexpected ways.”

The designer’s Madison Avenue office reveals much about his personality and interests. Every surface is crowded with mementos of his career, black-and-white portraits of his wife and three children, model cars and airplanes, miniature cowboys and horses, and innumerable stacks of coffee-table books on such topics as architecture, automobiles, art, and watches. As chairman and chief executive officer of the company he founded in 1967, he remains intimately involved in every aspect of the brand, but he remains particularly interested in the high-end products and services that are inspired by his own passions. “I’m the customer,” he declares, noting that he and his wife, Ricky, often shop his stores around the world to experience the presentation, the products, and the service. Invariably, he offers constructive feedback.

Lauren’s personal experiences and observations influence many of the company’s expansion strategies and new product lines. He recalls that men wore neckties when he was a young man coming of age in the 1950s; he rebelled by sporting a leather jacket. Today, he says, young men want to wear the suit and necktie again. During the economic boom of the past decade, his clients sought not only higher-quality fabrics for their clothing but also a greater degree of personalization; even in tough economic times, he believes they will not forgo such luxuries. “A custom-made suit feels great on,” he says. “Custom-made shoes feel like you’re not wearing shoes at all. When times are tougher, [clients] may not purchase three or four suits, but they will still buy one custom made.”

Customers’ options have expanded this fall with the introduction of the company’s Purple Label Sartorial Collection, which is inspired by the traditions of London’s Savile Row, where tailors make each garment by hand one stitch at a time. While two of the suits in the collection will be available off the rack, the company will offer 16 other Sartorial suits through its made-to-measure program. All Sartorial suits require up to 30 hours to complete. Within the Purple Label collection, the store will also offer made-to-measure suits, shirts, and formalwear, as well as made-to-order footwear, luggage, neckwear, and silver accessories. Produced by Italian tailors in Italy, the made-to-measure Purple Label suits are available in more than 350 fabrics, such as vicuña, and range from $5,600 to $34,000 for certain limited-edition fabrics. Ronald Frasch, president and chief merchandising officer of Saks Fifth Avenue, thinks that, even in the competitive menswear market, Lauren’s suits stand apart. “[His suits] respect the craft and tradition of European tailoring,” he says, “but are styled with an American sensibility. He brings a sharp focus to his tailored clothing but embraces color and pattern in a way that feels completely American.”

European craftsmanship and clean American lines also inform Lauren’s 28 styles of made-to-order dress shoes. Priced from $1,700 to $5,800, they can be made in 14 different leathers and three different crocodile skins. Some of these materials are also being incorporated into the company’s range of leather goods, accessories, and luggage, which can be custom ordered. For example, the company recently was commissioned to create a custom gold-colored alligator attaché case with gold-plated hardware.

Personal service, however, is not confined to custom commissions. The new men’s store will cater to its best customers with a variety of amenities, including meals served by butlers on silver trays. Top clients also will receive invitations to exclusive events like the cocktail party and private-shopping night that NBA player LeBron James hosted at the mansion in 2008. In addition, the store has partnered with Mercedes-Benz to provide VIP clients with car service manned by drivers wearing Black Label apparel. For clients whose schedules prevent them from visiting the store, sales associates will offer in-home consultations to advise on seasonal wardrobes, make alterations, or reorganize closet space.

New York is not the only city where Lauren is causing a stir. Perhaps the most American aspect of his personality as a designer is his willingness to experiment—a characteristic that affects his retail operations as well as his fashion concepts. In April, for instance, he opened a 25,000-square-foot store in Paris—his largest European location—which houses his restaurant Ralph’s. The eatery has quickly become one of the city’s hottest dining spots. “I’m a novelty in Paris,” he says.

Another novel idea to issue from his imagination is his first series of timepieces, which he developed with Johann Rupert, chairman of the Swiss luxury group Richemont. The unaffected elegance of the Black Sporting Chronograph—which houses a mechanical self-winding movement by Jaeger-LeCoultre and has a 48-hour power reserve—exemplifies the spirit of the line. “I’m working on the watches just about every day,” he says. “I’m a collector, and I’m always looking for watches. They often inspire my [other] designs.”

Lauren’s collection of more than 40 sports cars also serves as a source of inspiration. His carbon-fiber McLaren supercar was the impetus for a contemporary furniture line made from the same sleek, lightweight material; the chairs that surround the coffee table in his New York office are from the same collection. “For me, the cars are moving art,” he says. “Both cars and watches are working machines that are fun.”

Fun and a sense of adventure have defined the Ralph Lauren brand from the day he quit his job as a tie salesman to start his own business more than 40 years ago. One of the first lessons he learned was that quality trumps price, and so he sought out Sulka to create his first neckties. “Sulka was making handmade ties in the best fabrics, and I had them make my ties,” he recalls. At a time when the average necktie sold for about $7 or $8, he sold his for $15 to $20. “They became an instant hit,” he says. “I was going door-to-door selling these beautiful ties wearing a bomber jacket and jeans.”

Lauren’s confident, carefree, and classic American image echoes the elegant insouciance of film idols Fred Astaire and Cary Grant, both of whom the designer admired growing up. “They had a sense of their own style, and they just knew how to wear it,” he says. The clothes do not make the man, in other words; the wearer makes the clothes.

This understanding that true style is an outward manifestation of the inner self—an attitude, a point of view—lies at the heart of Ralph Lauren’s appeal. “Ralph,” notes Saks Fifth Avenue’s Frasch, “was the first designer to build an entire lifestyle brand, and he continues to envelop the customer in his world of style, privilege, and refinement.”