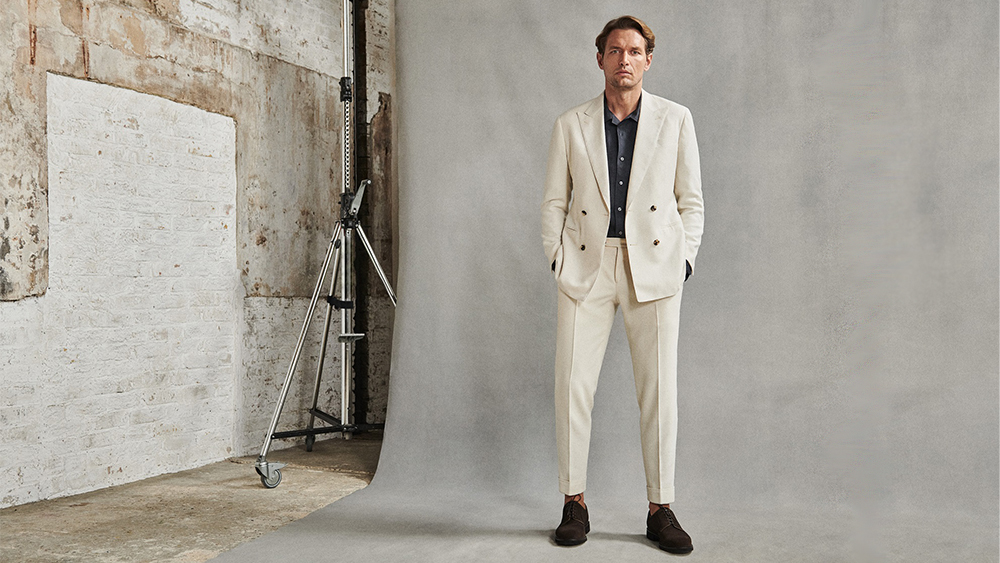 Since launching in 2009, Thom Sweeney has built its reputation by bringing a modern sensibility to traditional Savile Row rigor. Now more than ever, the norms of old-school tailoring—a business that largely happens offline—bear rethinking. Sweeney is doing its part, expanding upon its 21st-century approach with a new e-commerce site. Aside from making its artfully understated clothes accessible with a matter of clicks, the brand will be donating 10 percent of all e-commerce sales to Covid-19 relief.

Previously, Thom Sweeney’s collection of neo-natty tailoring—marrying British polish with a more Mediterranean breed of casual, unstructured ease—was only available through the brand’s flagships in London and New York or third-party retailers like Mr. Porter. In an effort to support their communities on both sides of the pond, Sweeney will be dividing the funds raised between two organizations: Heroes, a British non-profit recently created to support the UK’s National Health Service workers, and the New York City Mayor’s Covid-19 Emergency Relief Fund, providing aid to healthcare workers, small businesses and the city’s neediest. And the initiative isn’t just for now—the plan is to continue donating for months to come.

“It’s a tough time for anyone in retail, but tougher still for those healthcare and key workers who are steering our society through this, both at home and abroad,” co-founder Thom Whiddett said in a press release. “We are keen to do our bit to support those people who are giving more than anyone else to fight this crisis.”

It’s an admirable effort, made even easier to support by the brand’s endlessly wearable wares. The new website makes the entire Thom Sweeney world digital (at least the ready-to-wear, made-to-measure still relies on good ol’ fashioned fittings). Whiddett and Luke Sweeney, the brand’s founders, met while working at Timothy Everest, the esteemed Savile Row house. As such, the duo is well-versed in the Row’s exacting standards. It’s no surprise, then, that the website is thoughtfully considered: everything from suits to sweaters to sneakers is pictured as a product still-life and on-model. It may seem like an inconsequential detail but, as any frequent online shopper knows, getting to see the details as well as the overall scale is key.

The Spring/Summer collection offers plenty of pieces ideally suited to our current moment: the most elegant iteration of a sweatshirt we’ve seen of late, fuss-free piqué button-ups and cargo pants you can actually wear to the office (whenever it reopens). And, of course, Sweeney has you covered on that front with deconstructed blazers and quietly dignified suits. The fact that buying any of these helps relieve the current crisis is a cherry atop Thom Sweeney’s sundae of appeal.