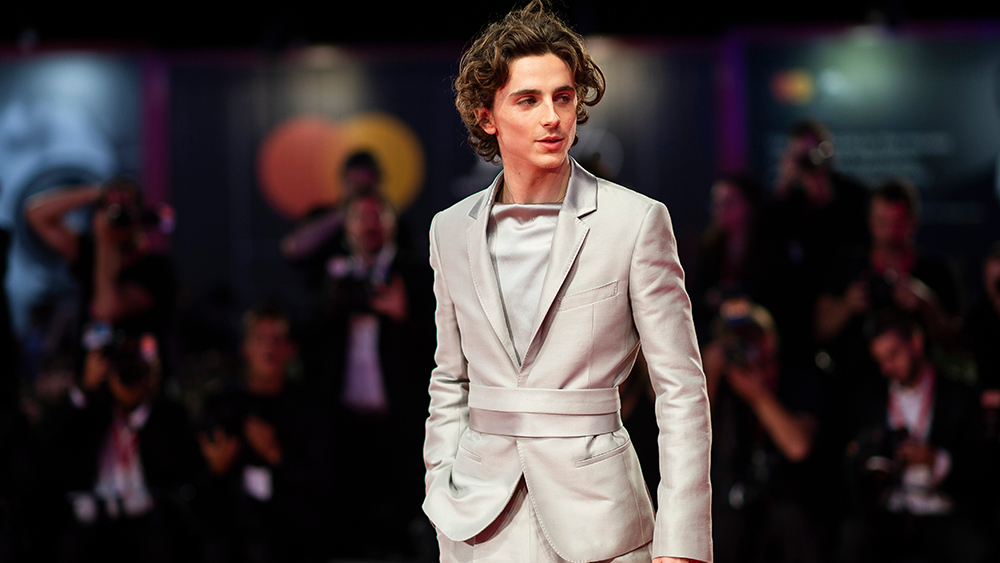 When actor Timotheé Chalamet stepped out onto the carpet at the 76th Venice Film Festival in a pale gray cotton silk and satin suit, courtesy of designer Haider Ackermann, it felt like some kind of miraculously rendered harmony, a simultaneous visual chord progression created by the actor and his forward-thinking sartorial choices.

Maybe it was in the details of the double-belted waist or the black ankle boots. Maybe it was the way the fabric’s sheen picked up the red carpet and made the suit look almost pink in some light. But the alchemy, whatever it was, elicited an overwhelming response. “In wearing this look, Chalamet seems to have single-handedly reinvented the suit and perceptions of what modern menswear can be,” Fashionista’s Stephanie Saltzman wrote. Paper claimed he “won” Venice; HighSnobiety believed he “killed” it—in a good way, of course.

Amid the hyperbole was humor at a moment in fashion that had so clearly—and with such velocity—ascended to a stratosphere beyond. “Does tilda know timothée has Bling Ringed her closet,” asked Mashable’s Angie J. Han, referring to the actor Swinton, who’s also caused a stir in Ackermann’s clothing. “How Timothee Chalamet manages to be a quintessential 2019 heartthrob AND a 19th-century women’s horse racing superstar, I don’t know,” wrote Louis Virtel, co-host of the podcast Keep It! in perhaps my favorite reaction of them all.

And while there were no shortage of well-dressed women turning heads at the event, Chalamet’s look, both soft and powerful, seemed to contain the elusive power of getting people to care about menswear. Not even this year’s MTV Video Music Awards, an infamous playground for fashion mischief, could conjure such results.

This isn’t an entirely new trajectory for Chalamet, who got folks talking when he wore an embellished Off-White harness at January’s Golden Globes. It’s also not his first foray with Ackermann, who describes Chalamet as “my little bro.” The pair worked together during the press tour for Call Me By Your Name; the actor donned a white Berluti tuxedo of Ackermann’s design at the Academy Awards in March (Ackermann has since left Berluti to focus on his namesake brand).

But this moment, which brought Ackermann out onto the Venice carpet alongside his friend, seemed akin to a certification of a style-world status beyond one-hit-wonder for the 23-year-old. “Who is the stylist here?” many wondered, wanting to crown the third party involved in brokering this moment. But there was none. “I don’t want to work with a stylist or anything,” Chalamet told Frank Ocean in an interview with V Man earlier this year. “I’ve been following designers like Raf, Haider Ackermann, Hedi Slimane—these guys are like rock stars. They’re artists.”

In many senses, Chalamet is the perfect symbol of a changing tide in men’s style, a combination of shifting attitudes around the rigid gender norms of traditional menswear, and an increased interest and appreciation in bespoke tailoring (and its power).

And while both changes are positive, it’s worth saying that a look like this would not work on most. The double-banded belt only creates that silhouette on a tiny waist, and a silk undershirt might not always be occasion-appropriate. Luckily there’s a lot out there that can claim inspiration from this: Tom Ford’s formalwear, for example, as well as some of the stuff Norbert Stumpfl is doing at Brioni comes to mind, as do Kim Jones’s recent collections for Dior. And while Chalamet may be an oddly perfect vessel for carrying this message to the masses, what’s clear is that the industry is ripe with “big bro” players, ready to take menswear to the next level.