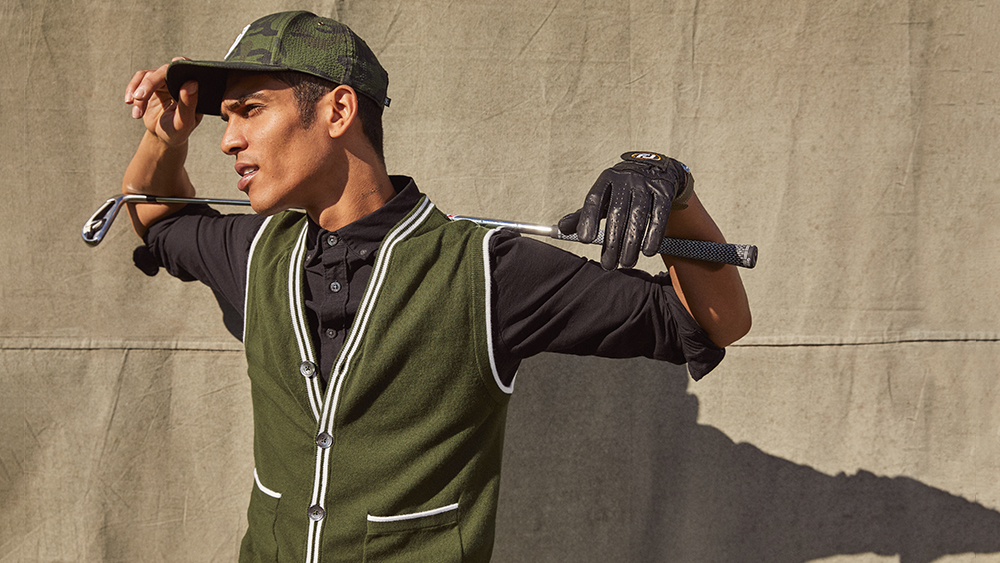 With the Masters in full swing, it’s an appropriate time to reflect on golf’s sartorial side—even if it’s been somewhat lacking in the modern era.

“I feel like golf style has been a little stagnant for the last decade or so,” designer Todd Snyder tells Robb Report. “I think there’s a lot of confusion out there with fashion in general, and it’s hard to figure out what the rules are.”

But as the creative force behind his eponymous menswear label, Snyder is in a unique position to set fairway fashion’s par. And that’s precisely what he’s doing in a new collaboration with golf shoe giant FootJoy, which debuts Thursday, April 8 (sign up here for early access).

“They’re the number one shoe in golf, plain and simple,” Snyder says. “To be able to work on a brand with that much story and history was, for me, like being a kid in a candy shop.”

Though the century-and-a-half-old brand is best known for its footwear, the Todd Snyder x FootJoy collection—which includes a Snyder-ized twist on its signature Premiere Series Packard golf shoe—encompasses a wide range of apparel and accessories including cotton pique tipped polos, quarter-zip fleece sweatshirts, seersucker caps and much more.

Snyder has been acquainted with golf from a young age: He recalls growing up across from a course in Huxley, Iowa and hunting for stray balls in the woods before learning to play the sport with family members. In that sense, the collaboration is something of a homecoming. “It really brought me back to my roots, remembering my dad and my grandfather,” he says.

But, in recent years, the game was never really absent from Snyder’s mind. The designer recalls poring through vintage images in his design process, finding particular inspiration in old snaps of golfing greats Chi-Chi Rodriguez and Arnold Palmer in their youthful days. “In that ‘60s and ‘70s era there was this great, classic style that I think has kind of been forgotten.”

That is, until now. It’s easy to imagine peak-career Palmer teeing off in any of the vintage-inspired pieces that figure in the collection, whether that’s a sporty cotton-cashmere sweater vest or a Harrington jacket made from nubby navy seersucker.

While rooted in the classics, the collection is full of irreverent touches that should defuse any notion of country club-stuffiness without going full John Daly. Camouflage—a Snyder signature—appears liberally, from the body of a tipped polo to the midsole of a Packard golf shoe to one side of a reversible bucket hat that may recall Bill Murray in Caddyshack.

“Camouflage is such an ultimate, masculine badge of honor,” Snyder says. “My thought was, let’s soften it up a little bit and put it on the golf course.”

And though the collection’s collared shirts and full-grain leather golf shoes may satisfy on-course dress codes, Snyder was unafraid to push the envelope with more distinctly athletic fare like stretch seersucker shorts and joggers that make use of elastic waistbands and cuffs.
Joggers may be a mainstay of contemporary sportswear, but Snyder notes that they’ve yet to make their way onto the green. “We have suits now that are made of stretch fabric and have elasticated waistbands and cuffs,” Snyder notes of fashion’s sport-ification.

But ultimately, Snyder has not lost sight that he’s designing for the fairway first and the runway second. With performance in mind, he’s incorporated FootJoy’s moisture-wicking Drirelease fabric into the collection’s tipped polos and quarter-zip sweatshirts, finding the ideal compromise between technical fabrics and classic aesthetics.

“What’s wrong with golf right now is it that it’s all tech and that, to me, is the wrong look,” Snyder says, adding that he aimed to blend performance apparel with “that traditional sense of piqué and seersucker, and do it in a modern way.”

Todd Snyder and FootJoy may have just teed off, but this won’t be the twosome’s only round: the partnership is expected to continue in 2022. And the initial collection has already been spotted at this year’s Masters, with players Max Homa and Will Zalatoris donning it in practice rounds. It may be too early to tell whether the designer’s touch sets off a sport-wide renaissance, but the revolution in golf style has begun.