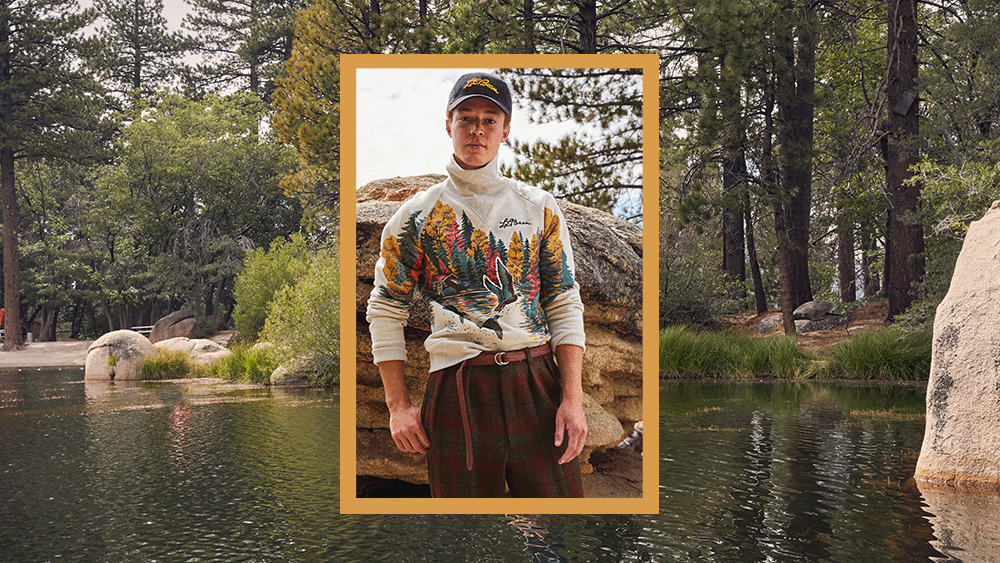 It’s a picturesque autumn day, illuminated by red leaves falling and the smell of a campfire not too far away. Strolling around an elegant cabin tucked in the Maine woods with Todd Snyder, it’s clear that the countryside suits him. Snyder might be a New York-based menswear designer whose utilitarian aesthetic appeals to understated fashion guys, but up here, he’s connected with his natural side. The cabin is one that Snyder outfitted at Hidden Pond––a genteel hotel of ‘treetop lodges’ in Kennebunkport with its own organic farm––as an architectural interpretation of the L.L. Bean collaboration, launching October 30th, that he’s spent the past five years working on.

It’s not every day that L.L. Bean works with designers—in fact, for the 108 years it’s been in business, the company has never done such a collaboration. The union came with great persistence; it took years for the designer to even reach the correct contact at Bean. But Snyder, with his Midwestern charm, has a knack for winning over American heritage brands. When he was the head of menswear at J.Crew, Snyder masterminded partnerships that became a cornerstone of the preppy stalwart. This formula proved so successful that it’s since become an integral part of his namesake brand.

“I took a Japanese lead,” Snyder says. “I’d look at Comme des Garçons, Junya Watanabe, how they would always collaborate with other brands and have an interesting take on things. I thought ‘Why don’t I become the American version of that?’”

While he’s partnered with the likes of Moscot and Sebago in the past, Snyder’s collaboration with L.L. Bean may be his most expansive yet. It’s also one of his most personal. “I used to be very into the outdoors but, since I moved to New York, I became very focused on my work, my kids, life. So, this was really a coming home for me.” He describes the partnership as “a bit emotional”, noting that current events made it all the more appealing to “connect with something more simple.”

True to form, his collection respectfully imbues L.L. Bean with the air of a downtown aesthete. Think of what a Nolita guy might wear to shoot clay pigeons in Maine.

“Originally I just wanted to do a Bean boot,” Snyder says as he opens a few cabin closets at Hidden Pond, unveiling a mix of Norwegian sweaters, Sherpa jackets, cord and camouflage. While traditional, these pieces offer a refreshed vision: bolder colors, throwback details, a smarter fit. Snyder says the design process began when he came across a vintage duck camouflage in the L.L. Bean archives. The fabric features in a puffer vest that coordinates with the cabin’s foyer wallpaper and reverses to high-vis orange (which Snyder refers to as his “exclamation point”).

He did take on the classic Bean boot, rendering it in evergreen bison leather with a dash of orange on the sole––something both hypebeasts and classicists can appreciate. The chamois shirt, a flannel L.L. Bean hunting essential since the 1930s, rings true in a magnified archival buffalo plaid, which also upholsters mid-century modern chairs in the cabin’s living room. Snyder’s olive-hued edition of the chamois shirt could live easily in anyone’s wardrobe­—man, woman or otherwise—as would the pleat-front corduroy suit he styled under a bright yellow down vest.

The collection is so unisex that when it debuted in Snyder’s fall fashion show, back in February, he had women on the runway for the first time. “I assumed a lot of women would wear this because L.L. Bean is such a unisex brand,” he says. “Everybody borrows these pieces from husbands or boyfriends.”

Snyder’s evolved take on L.L. Bean is the result of nearly two-dozen trips to Maine and several deep dives into the brand’s mind-bending archive. It’s an honor won by few. Here, he sifted through everything from 1910s Bean boots to the 1960s Norwegian sweater that’s recognized by The Met, The Official Preppy Handbook and fishermen alike.

The archive is housed in Leon Leonwood (L.L.) Bean’s former residence, which Snyder describes as “humble and simple and quaint––it’s not at all big.” He says the brand’s namesake was ever-present in the design process: “I tried to think ‘If I were him, would I approve this?’ and keep that in mind, pushing the envelope ever so slightly. I wanted it to be authentic to Maine but also appeal to a lot of people without overdoing it.”

Diving into the L.L. Bean archive myself, it’s impressive how little the brand’s product has changed in over 100 years. It was a Saturday morning and, unannounced, the company’s CEO, Stephen Smith, showed up in his vintage Land Rover to chat about customer letters from the early 1900s over bagels. Despite the ups and downs brands experience over time, L.L. Bean has managed to maintain an easy-going integrity that goes beyond the product.

“A classic is a classic for a reason,” says Smith. And while Bean has dabbled in New York Fashion Week before (for those who remember the launch of L.L. Bean Signature, led by Rogues Gallery alumni Alex Carleton) perhaps this collaboration marks a new era for the brand, or simply reflects the outdoor life we’re now all yearning for––even the downtown set and even Todd Snyder.