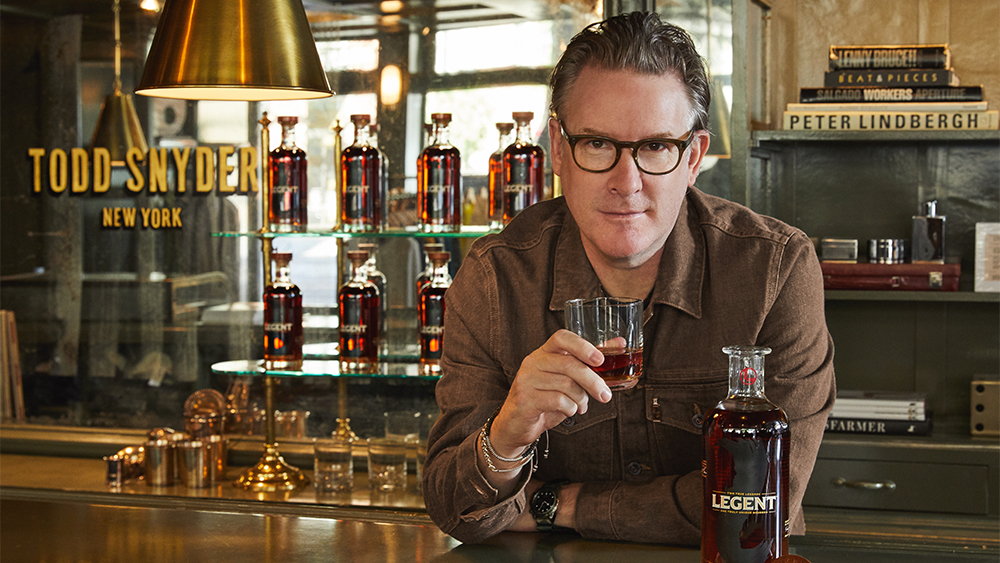 How do you turn a bottle of bourbon into something you can wear?

If anyone knows the answer, it should be Todd Snyder. As J. Crew’s head of menswear, he transformed a Tribeca dive bar into the J. Crew Liquor store (since reborn as Todd Snyder at The Liquor Store). Now the designer has applied his alchemical touch to actual liquor, resulting in the TS x Legent Bourbon Selvedge Jacket.

Snyder’s muse isn’t your average bourbon: Legent itself is a collaboration between Jim Beam Master Distiller Fred Noe and Suntory Chief Blender Shinji Fukuyo. Legent, a Kentucky straight bourbon made according to Noe’s family recipe, is partially finished in red wine and sherry casks and then blended by Fukuyo, marrying bourbon-making tradition with Japanese blending techniques.

“Japanese selvedge denim is some of the finest fabric for producing high-quality jeans,” Snyder tells Robb Report. “We sourced the denim from a mill in Okayama, Japan using several natural-toned yarns to achieve the similar rich amber tone of Legent. From there. the denim was dyed and woven on old shuttle looms to create a three-dimensional texture which gives the fabric a beautiful fading appearance.”

Afterward, the denim is cut and sewn in Los Angeles, using the body of the brand’s signature Dylan jacket as a template.

It has a traditional denim jacket length, hitting just at the hip, and features two generously sized chest flap pockets that look as if they might just hold a flask. To our eyes, it would be best garnished with a pair of white jeans or cords and slide nicely over a fine-gauge cashmere crewneck as temperatures continue to fall.

As unique as it is, the Bourbon Selvedge Jacket is not the first time in recent memory that an intoxicating beverage became a piece of menswear. In 2019, a collaboration between author and photographer Matt Hranek and Fox Brothers resulted in a “Negroni tweed,” which J. Mueser and other tailors turned into jackets.

The whiskey-to-menswear pipeline has also run in the other direction. Standard & Strange, a high-end denim shop with physical locations in Santa Fe and Oakland, launched Standard & Strange Whiskey earlier this month. Its first offering, Mizunara Single Cask Whiskey, takes a young California whiskey and ages it in a cask made from rare Japanese oak—fitting for a West Coast brand that stocks hard-to-find Japanese labels.

Just 100 of Snyder’s Bourbon Selvedge Jackets were made. Each is hand-numbered and features an interior screen print identifying it as part of the limited-edition collaboration. The initial pre-order inventory uploaded to toddsnyder.com on October 21st sold out within hours; however, online stock is expected to see a small refill before the start of the weekend. The jackets will also be sold at Todd Snyder’s two New York City stores.

“I’m so excited to see how much people love this collaboration,” Snyder tells us, when asked about its reception. “It just goes to show how much the consumer is craving more than just quality. They want a storyline rooted in something intriguing and unique.”

Scoring one of the remaining jackets—which retail for $248—might prove as difficult as finding a bar seat in Manhattan at the present moment. And if you don’t secure a Bourbon Selvedge Jacket for yourself, don’t despair: you can always be consoled by a glass of the cross-cultural juice that inspired it.