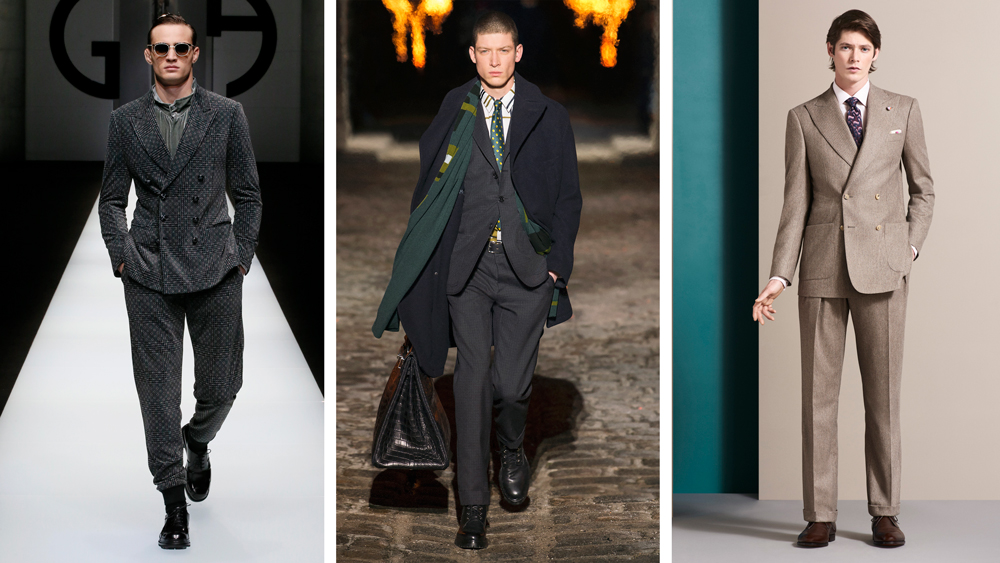 Though the days of back-to-school shopping are long gone, that thrill of planning a fall wardrobe (and the subsequent school-year personality) is a feeling that very much remains. And instead of hunting for new backpacks or the perfect fresh pair of sneakers—though there are plenty of chic, thoroughly grown-up options for both of these hitting shelves—nothing gets you in the mood for the new season quite like investing in a new suit.

This fall, there are plenty of sharp styles to choose from—many of which forgo Silicon Valley casual for something that looks much closer to the strong-shouldered power suits of the 1980s. So, from Ralph Lauren’s classic approach to monochrome to Hermès’ subtle drama, read on to discover the top styles of the season. Slipping one on may just kick you back into gear after a long, languid summer.

Ralph Lauren, like many of the designers on this list, makes a strong case for adding a double-breasted blazer to your wardrobe this season. This particular Dark Glen two-piece suit shown here in the center($4,995) stays modern thanks to its close-cut fit and features a check pattern that is just subtle enough to give you plenty of room to play with striped shirts and bold ties. The designer also played exuberantly with classic patterns—blowing up herringbone, checks, and houndstooth into two- and three-piece suits on the left and right (from $3,190). And while both would make a subtle statement when worn with classic white shirts and oxfords, piling pattern on pattern like the brand does here is an easy way to punch up your nine-to-five. Available at Ralph Lauren boutiques nationwide.

This season, Hermès stuck with what it does best: crafting pieces that nail that often-elusive balance between casual and elegant, sharp but never overdressed. The suits shown here on the left and right manage to look almost cozy thanks to super-soft, wool, three-button jackets ($4,325 and $3,250, respectively) and slightly roomy trousers, but the careful construction of each—shown in details like expertly placed pockets and subtle military-inspired embellishments—keep them put-together enough for the C-suite. The windowpane-check suit in the middle ($4,635) is a nice option if you’re looking for something just a little bit more classic—though we’d suggest adding a serious dose of personality by artfully clashing your shirt and tie (and grabbing an oversized Birkin to boot) like the brand has done here. Available at Hermès boutiques nationwide.

Though Savile Row tailor Richard James hasn’t rolled out its full fall ready-to-wear collection, the late-1970s/early-1980s-inspired line is the ultimate take on the season’s penchant for retro-inspired suiting. The sharp double-breasted styles feature wide peak lapels and slightly roomier cuts that nod to the original but feel modern, thanks to ultrafine wools done in crisp camel and patterned with an intricate white-gray-and-purple Prince of Wales check (and, you can always have the jackets cut slimmer and the trousers cut shorter for a more current silhouette). The sandy pinstripe style on the left is an easy way to transition out of your linen suits thanks to its soft colors—pairing as easily with white poplin shirts now as it will with knit turtlenecks come fall. All price upon request; call +44.20.7434.0605 for availability.

Having helped pioneer the trend the first time around, Giorgio Armani obviously knows a thing or two about the power suit. This season, the designer showed takes on the classic that ranged from buttoned-up to laid-back. The sharp double-breasted style (jacket, $2,795; trousers, $925) on the left is an easy update on the 1980s style, accentuating the shoulders with a confident shape that would be right at home at your next Four Seasons power lunch. The two other styles play with the suit’s classic codes of formality, rendering it down with textured herringbone (jacket, $1,195) and jogger-style pants ($1,395). Similar styles available at Giorgio Armani boutiques nationwide.